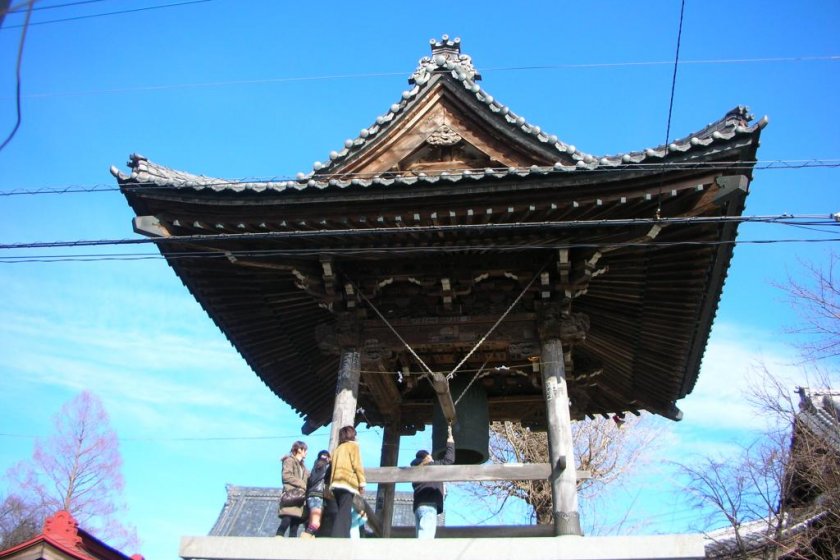 local, authentic, off the beaten track

Around the same period there were literally thousands of temples springing up all over Japan thanks to the then recent acceptance of the faith brought over from the mainland, much of it by Japanese priests returning from periods of study in China.

The founder of Jion-ji was one such individual, and existed in the shape of Ennin (794 - 864AD)of the Tendai sect of Japanese Buddhism, sometimes called by his posthumous name of Jikaku Daishi, although a deeper look at his activities around the time Jion-ji was said to have been brought into being also has him active in other areas of Japan, some much removed from northern Saitama.

Whatever the truth behind the founding of this and so very many other temples up and down Japan whose origins are lost in the mists of time, Jion-ji in the early 21st century is going strong and is still providing spiritual solace to a local populace often observed bowing as they pass by on their way to work, school, or just heading out for the day.

Unlike many temples in Japan, Jion-ji does not have gates limiting the opening hours to the traditional 6-6 so visitors can pass through the grounds any time. One local did indicate this was a result of the thrid Tokugawa Shogun, Iemitsu (1604 - 1651) stopping here to eat in the 17th year of the Japanese Kannei period (1624 - 1643), the same time a boatload of Spaniards visiting Japan in Nagasaki, a thousand or so kilometers to the south, were being decapitated - both documented events! Unfortunately, besides claiming a link and offering a convincing reason the same local was not forthcoming.

The main hall of prayer (honden) is the focal point of the temple and is a short 20 meters or so from the roofed gate - just behind a large cauldron in which incense burns, filling the air with a fragrance not easily forgotten when first inhaled.

There is also a small shop, sometimes open, to the right selling religious items such as beads, or fragments of wood said to be able to protect the wearer. A collection of horizontal strings next to the shop are for those purchasing fortune papers to tie their papers to once read. The temple will burn these periodically.

The 'reverse swastika' as many from the West call it decorating some of the large containers just in front of the honden can surprise at first until it is understood Buddhism had used this symbol for centuries prior to its 'reversal' and misrepresentation during the mid-19th century.

Throughout the year a number of smaller festivals are held in the local community, with the April 8th 'hana-matsuri' (flower festival) particularly popular with horticulturalist types coming to view the blooms on what is said to be the birthday of Buddha.

At other times too the shrine is a popular place for locals to meet and chew the fat or include in an afternoon walk around the area but time your visit well and there will be little to stop you getting swept up with the thousands that attend in autumn or at New Year when the two 'biggies' of the year take place.

In mid-November, one of these 'biggies' sees kids in kimono head to the shrine as part of their 7-5-3 celebrations (to celebrate actually having lived to these ages) with similarly decked out parents, grandparents and others taking part in a celebration with a thousand years of history according to some sources. This will take place on the weekend closest to the 15th of the month and his huge in this particular area.

Six weeks later and with the seeing out of the old year and bringing in the new, throngs head there at midnight on the 31st to line up and strike a long wooden beam against the heavy iron bell in the corner of the grounds raised on a platform and under an imposing roof that towers over the passing road below. This is said to help rid themselves and humanity of evil thoughts, concepts and spirits and is best done well wrapped - perhaps with a cup of hot, sweet sake to hand.

A tad too far from a train station unfortunately, this is one you will need to visit by car, and a taxi from Kasukabe at the end of the Sky Tree / Isesaki lines shouldn't impose too much of a burden on the pocket if you are not renting.

However you get here - if at festival time - you will be glad you did. Just be sure to keep your head! 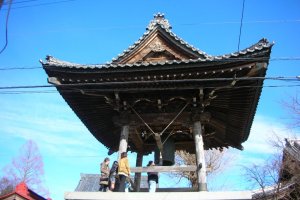 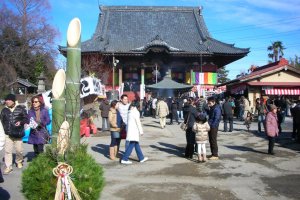 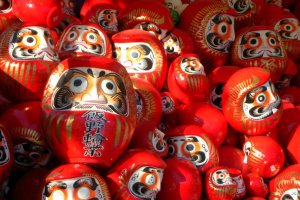