Join Koshigaya citizens as they celebrate the Obon ancestor season and beat the heat with a lively dance tradition borrowed from Shikoku, the famed Awa Odori.

Awa Odori originated in Tokushima Prefecture on Shikoku Island in the late 16th century as a celebration of the building of Tokushima Castle. Now the largest dance festival in Japan, it is held in the Obon ancestor festival season from August 12th to 15th. Awa Odori aficionados who migrated to the Tokyo area brought it with them. A Koshigaya entrepreneur who was a native of Tokushima introduced Awa Odori to Koshigaya in 1985, where local and visiting teams perform this exuberant and colorful tradition. It has grown in popularity over the decades and is now the third largest celebration of its kind after Tokushima and Koenji in Tokyo.

Just like Tokushima’s streets, Koshigaya’s roads around the station are crammed with teams of dancers accompanied by music played on shamisen, taiko drums, flutes, and bells. Over 50 teams from Koshigaya, dozens from neighboring towns, and special guest teams from Koshigaya perform the distinctive dance moves and chant the Awa Odori song. The parade route includes an outdoor stage where featured teams do spectacular routines for the crowds. 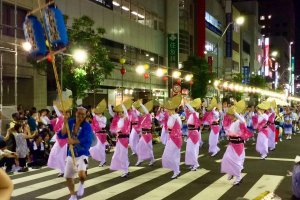 Elena Lisina 3 years ago
It must be great to watch!
Reply Show all 3 replies

Elizabeth S Author 3 years ago
It’s not so crowded so you can get up close to the parade of dancers.
Reply

Elena Lisina 3 years ago
I'd like to watch Hanagasa Mtsuri in Yamagata. Is it very crowded?
Reply

Koshigaya Awa Odori isn’t so crowded. You can easily see the performance.
Reply
4 comments in total