Newly opened only two summers ago on the Wakasa Interchange on Kosai Road in Otsu city, Imoko no Sato Road Station has a pretty interesting name. Imoko no Sato translates to my sister’s hometown. The name was selected by the local residents in Otsu city. Ono Imoko was a Japanese politician and diplomat in the late sixth and early seventh century, a period known for its social, artistic and political transformations. Ono Imoko's family was notable for linguistics and scholarship, and the descendants of the family include a beautiful female poet, a poet and scholar; and a calligrapher. Imoko’s place of birth was also in the area, in a town near the road station. His tomb is said to be in Ono Imoko Garden near JR Ono Station.

The information center had lots of information on Otsu city and Shiga prefecture, and Ono Imoko as well. Even information on the nearby Ono Shrine was available. Shiga prefecture is known for Omi Beef, and the restaurant here sells lots of it. Omi Beef on rice or in a hot pot, as well as Omi Beef steak. Highly recommended is their beef steak, with the meat coming from the grade A5 class. Japanese beef are graded through strict evaluations and ranges from C1 to A5, with A5 being the highest grade. A5 grade cattle are fed good quality grain and raised with scrupulous care.

In the souvenir shop, the freshly made saba sushi was delicious. Saba sushi is a must-try item in Otsu city. Freshly made using the area’s rice and water, it tasted slightly sweet. As it was still early in the morning, the shelves were stacked with fresh locally produced vegetables, sweet potatoes and more. If you are a fan of beef and garlic, do try the local Omi beef garlic miso paste or the Omi beef rice crackers! 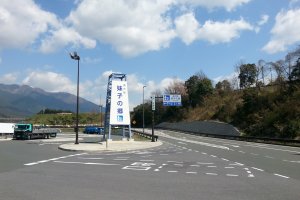 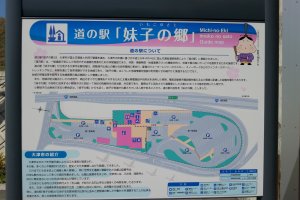 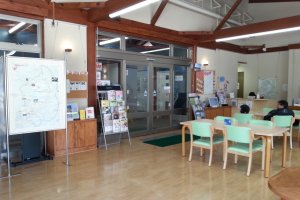 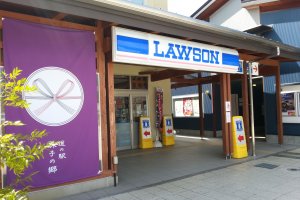 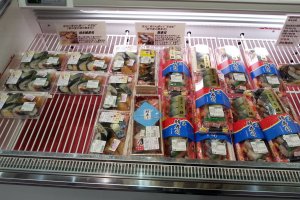 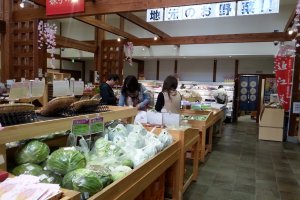