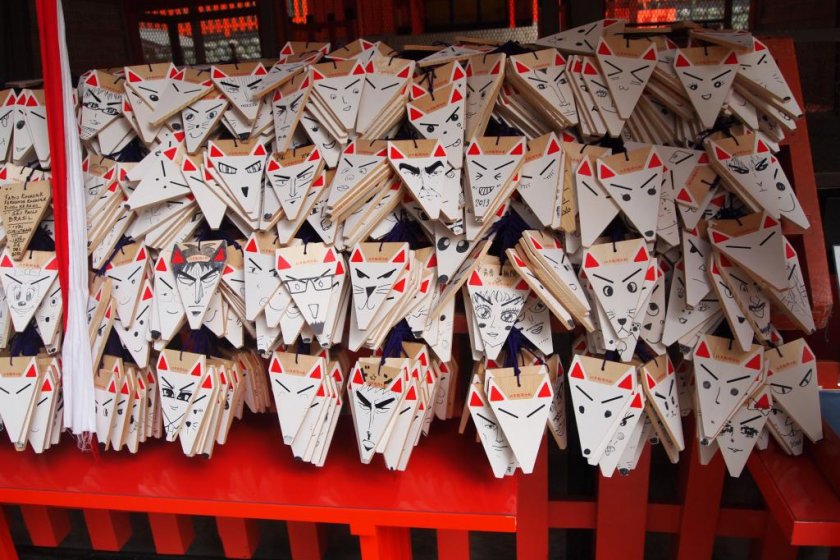 Fushimi Inari Shrine fox face plaques. Write your wish, draw a face on the plaque, and say your prayer

If you can spare three days (or only two) of your trip to Japan to take a journey to Kyoto you'll find plenty to do and see in this ancient capital. Depending on what time you leave Tokyo you can take your time sightseeing - spending three or more days - or you can leave Tokyo early and return late on the second day if your travel time is limited.

We left Tokyo on the Shinkansen around 10:00 A.M. which put us into Kyoto just after 12:00 noon. After placing our bags in a coin locker (be sure you remember which one - there are dozens of them in the Kyoto train station!) we hopped on a JR Nara line train for a 5 minute ride to JR Inari Station to visit the Fushimi Inari Shrine (you can use your Shinkansen ticket for this ride too). The shrine is dedicated to Inari, the Shinto god of rice. There are numerous fox statues around the shrine as foxes are said to be Inari's messengers. This shrine is famous for its 1,300 vermilion torii gates. Be sure to walk through the torii gates trails. You'll see writing on one side of each torii. This tells the month and year the gate was purchased by a person, family, or company who make a donation to the shrine. The donation varies according to location and torii size. Small torii go for about 400,000 yen and the larger ones are well over one million yen. As you'll see, many of them are rotting at the base which indicates they have a limited life span, which means the shrine can open up those spots for other donors' torii.

Leaving Fushimi Inari Shrine we opted to return to Kyoto Station on the same train line (140 yen) to head to our next destination, Kiyomizu Temple. If you have time you can take the train back towards Kyoto to the next station, Tofukuji, to see the Zen Temple, Tofuku-ji. It's the head temple of the Tofukuji School of the Rinzai sect of Zen Buddhism.

Back at Kyoto Station we took a bus to Kiyomizudera. For buses in Kyoto you enter the rear door and exit by the front door where you pay your fare (220 yen) as you get off. Get off the bus at the first Kiyomizu-dera stop, which is after the bus turns left past the Hyatt Hotel. From there walk up the hill to Kiyomizu Temple. We stopped along the way for a snack of Japanese tea and sweets. There are a few shops along the way with the food available depending on which street you take (from the choice of two).

Kiyomizu Temple was established in 778, which was before Kyoto became Japan's capital. The temple has suffered through several fires over the years and the current buildings were built by the shogun Iemitsu Tokugawa around the 1630s.

Leaving Kiyomizudera we opted for a taxi back to Kyoto Station as we had a 30-minute train ride to get to our lodging for the night, Biwako Hanakaido Ryokan, which is located alongside Lake Biwa in neighboring Shiga Prefecture. We eventually found the right bank of coin lockers - remember, if you use these, take a note of where your locker is - and boarded our JR Kosei Line train from Platform #2 headed to JR Ogoto Onsen Station. We called ahead and let them know our train departure time from Kyoto so when we arrived the Ryokan's van was waiting to take us to the inn.

After a welcoming tea and small sweet in the lobby, where registration is done at your tea table, the women in the group get to pick their color choice of yukata from a selection presented by one of the staff. We also decided our dinner hour at this time. After getting settled into our room we changed into yukata and headed for the natural hot spring (onsen) bath to relax in the hot water before returning to our room for a pre-dinner cold beer.

Dinner is served in a private room on the ground floor that can be reached from the lobby and a very short walk through the inner garden, or through a hallway in case of rain. Dinner is very attentively served course by course by Hanakaido's excellent and friendly staff.

The hot bath is open late if you want to have one more dip in either the indoor or outdoor bath before bedtime.

Day one is over - read the next installment for day 2. 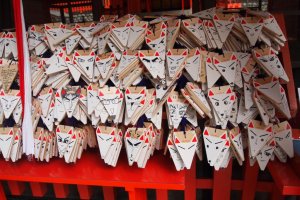 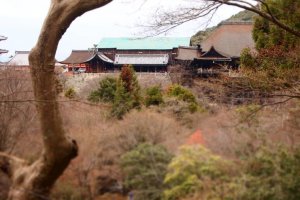 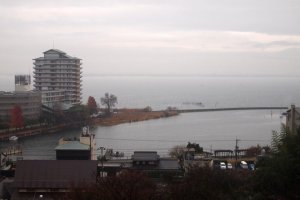