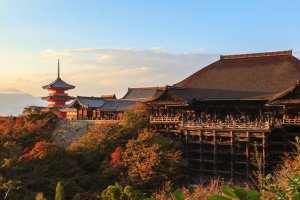 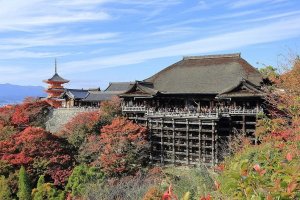 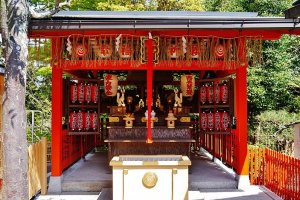 Kiyomizu-dera Temple was founded in 778. Its history dates back over 1200 years. As a sacred place where the great compassion of the deity Kannon prevails, the temple has long been open to citizens of all classes.

Thirty Buddhist buildings stand on the site, which extends over 130,000 square meters along the central slope of Otowa Mountain in the eastern part of Kyoto, including the Main Hall of the National Treasure and many other important cultural assets. Most buildings have been destroyed by fire more than ten times since their inception. Thanks to the help of the temple believers, they have been rebuilt over and over again. Most of the current buildings were rebuilt in 1633.

In 1944, the Kiyomizu-dera Temple was added to the UNESCO World Heritage List as one of the historical monuments of ancient Kyoto.

The waters of Otowa waterfall are divided into three separate streams. Visitors can use the cups provided at the base of the waterfall to drink from one. Each stream is believed to have a different effect: success, love, or longevity. You should only pick one though, as it is considered greedy if you were to drink from all of them.

Kiyomizu’s wooden porch is a highlight for any visitor, not just for its stunning city views in any season but for its impressive construction. The porch is comprised of 168 wooden pillars and over 400 cedar floorboards, all fitted together without the use of nails, relying instead on a unique interlocking-joint system.

Famous as the Cupid Shrine of Kyoto, this small shrine behind Kiyomizu Temple houses various gods, all who aid in finding or keeping love. There's even a love challenge: love will come easily for those who can walk blindfolded between two rocks.

This shopping street leads up to Kiyomizudera and is lined with shops, tea rooms, and restaurants serving local Kyoto-style cuisine and souvenirs. Especially famous in the area is nama-yatsuhashi, soft mochi cakes filled with red bean paste, cream, matcha, chocolate, or other seasonal fillings.

By City Bus: Get off at the Gojozaka Stop on Route 206 bound for Higasihama-dori Kitaoji Bus Terminal or Route 100 bound for Kiyomizu-dera Gion/Ginkaku-ji and walk 10 minutes. The bus can be crowded, especially after 11am and on weekends and Spring/ Autumn. Alternate route is Keihan train to Gojo and 15 minute walk via Sannenzaka, or catch a taxi.

Autumn foliage is lit up at night at Kiyomizu-dera

Autumn foliage is lit up at night at Kiyomizu-dera

Make the most of your visit at Kyoto's most famous temple, despite the large crowds.

Kiyomizudera temple is one of the “must see” features of Kyoto.

The Platform of Kiyomizu-dera Temple, Kyoto is an icon that is truly impressive.

Spending autumn in Japan's cultural capital is one of the most beautiful memories I have of the Kansai region, and Kiyomizu-dera..

One of the great sunsets in Kyoto can be seen from the Sai-mon West Gate of Kiyomizu-dera Temple.

A cold spring day at Kyoto's Kiyomizu-dera: the perfect place to relax and enjoy the spring weather while exploring this popular..

Nihon or Nippon translated literally means “the sun’s origin” though Land of the Rising Sun is a phrase that is commonly known..

The Ascent of Kiyomizu Temple

Kiyomizu-dera is one of the most popular temples of Kyoto. It has been registered in 1994 on the UNESCO World Cultural Heritag..

In the spring, Kiyomizu Temple features a cherry blossom light-up at night, which is a truly beautiful event.

Kiyomizudera, also known as the Pure Water Temple is one of more famous temples in Japan. This temple is located up in a hill in..

The Seiryu-e festival is held every spring and autumn near Kiyomizu-dera. The Seiryu or blue dragon is believed to be a guardi..

The temple is extremely popular any time of the year, especially during festivals and during New Year.

There are a lot of articles and photo stories here at JapanTravel focusing on Kiyomizudera, and with good reason: It is one of the..

Kiyomizudera, Kyoto: What a surprise and pleasure. Many of the visitors that day (in late December) were not Japanese, and they..

Located at the foot of the eastern mountains and Kiyomizu-dera, this Ryokan really is something else.

Welcome to Trip Sound, a small guest house that provides a perfect base for Kyoto and offers something for everyone.

For a limited time this summer, The Sodoh Higashiyama Kyoto is hosting a Japanese Sweets afternoon tea event. There will be a variety..

JapanTravel writer Bonson Lam gets an unexpected history lesson as he drops in to an inn with an ominous name in the cultural heart..

Maruyama Park is the oldest public park in Kyoto and a popular springtime cherry blossom viewing spot. It opened in 1886 and is located next to Yasaka..

The Yasaka Cry, located in the Gion district in Kyoto, is often referred to as the Gion Shrine. The shrine is one of the most famous shrines in the city..