Matsue Castle and the castle town

Matsue Castle is the centerpiece of Matsue’s well-preserved castle town. Find that perfect spot and enjoy the scenery or sail around the castle’s moats as if it were still the Edo Period. In a short excursion around the castle, you can see and enter many former samurai residences which play new roles as museums or visit the 200-year-old Meimei-an teahouse and gardens for a truly majestic view of the castle.

Completed in 1611 Matsue Castle is one of only twelve remaining original Japanese castles. Additionally, it is one of only five of those twelve to be officially designated a National Treasure. Despite being built to withstand war and siege the castle, thankfully, never faced any and, as a result, remains remarkably well preserved.

Matsue Castle stands out from other castles due to its size – at 30 meters tall it is the second largest of the surviving castles – and its striking black-over-white color scheme, a color scheme shared by the equally impressive outer walls. The curved roofs resembling spread wings and its black-over-white pattern led to the nickname “Plover Castle.” The castle is also surrounded by two moats, an inner moat around the castle grounds and an outer moat around the castle town which housed the highest ranking samurai and wealthiest merchants of the domain.

Today, the castle grounds serve as a cultural center of the city. Inside the keep, displays teach the history of the castle and some of the city’s history. Recently, a number of displays were moved to the neighboring Matsue History Museum so the natural beauty and unique characteristics of the castle’s interior can be appreciated easier. Including the artificial mound it was built on, it is the tallest building in Matsue. Thanks to this, the top floor has a wonderful 360-degree view of the city and Lake Shinji. The grounds are also the home to or a central destination of most of the city’s festivals, notably Matsue Suitoro, an annual festival which sees the castle and surrounding area decorated with hundreds, perhaps thousands, of paper lanterns, lighting the area up beautifully every weekend from late September through October.

During your visit be sure to check out Matsue Shrine and Jozan Inari Shrine inside the castle grounds. Jozan Inari was the favorite shrine of Lafcadio Hearn and famous for having over 2,000 miniature fox sculptures.

Also, keep an eye out for volunteer samurai patrolling the castle grounds. They’re always more than willing to join you for a photo, if they don’t ask first.

The Horikawa Sightseeing Boat is a highly recommended experience, especially if you are already at the castle. The boat travels around sections of the inner and outer moats, traveling 3.7 km over 50 minutes for a full cycle. The boat passes many historically and culturally relevant parts of the city and the driver doubles as a tour guide explaining each location to you and, in a full cycle, you can expect to be treated to a local song. If you don’t understand Japanese they have an English (also Chinese and Korean) recording for tourists.

The boat can be enjoyed in any season, and the route offers great seasonal views including cherry blossoms in spring, fall colors in autumn and a good angle to view the castle capped with snow in winter. The boats are equipped with kotatsu (a magical combination of a table, bed, and heater) in the cold months. On special occasions, special boats are offered, including a tea ceremony boat or, during summer, an all you can drink beer boat. Speaking of beer, definitely check out the Horikawa Souvenir shop to try some of the weirdest flavors of beer you’ll ever hear of. It’s worth it just for the story potential.

There are three boarding points, the most common being at the main entrance to the castle “Matsue Castle Ootemae.” The boats are frequent, but there is an indoor space provided if you would like to wait inside for the next boat to arrive.

Typically 1230 yen, foreign guests with passports are given a special rate of only 820 yen.

On the other side of the north inner moat lies the street Shiomi Nawate, which once housed many of the highest ranking samurai retainers of the domain, many of which are maintained and continue to be used as houses, others now refurbished into museums but still retaining their classic appearance. The street is lined with large pine trees leaning over the moat on one side and an undisturbed row of Edo Period Japanese architecture on the other.

Possibly the most famous of the museums are the Memorial Hall and Former Residence of the world-renowned Irish-Greek writer Lafcadio Hearn (who became Japanese and took the name Koizumi Yakumo). Hearn came to Matsue toward the end of the 19th century and, though he didn’t stay long, it was where he met his wife, the daughter of a former samurai clan, and where the majority of his stories of Japan are set. Another highly recommended museum is the recently refurbished samurai residence Bukeyashiki. The open and explorable home features traditional furnishing and wax figures to make the residence feel lived in and is a great way to learn about the daily lives of Edo Period samurai.

A must-see spot of Shiomi Nawate is the lord’s tea house, Meimei-an. Built by former Matsue domain lord, Matsudaira Fumai, a renowned tea master and founder of his own tea school, it was built to his exact specifications, and the matcha tea, wagashi sweets, and service style here follows the “Fumai” school dutifully. This is an excellent place to learn about tea culture in Matsue and Japan in general, and features the best view of Matsue Castle just atop the stairs. Every angle is good, but a circular stone denotes the easiest place to stand to view the castle without having any modern buildings or other obstructions in your shot.

Shiomi Nawate is directly north of Matsue Castle and can be reached within 10 minutes on foot from the castle keep. The entrance fee to these museums and sites is already inexpensive but bring your foreign passport and receive a 50% discount to each.

While exploring the castle town, it would be a shame to not stop at Matsue History Museum, located right beside the castle grounds. The free area alone is worth a visit, but the displays with an entry fee (only 250 yen with a foreign passport) beautifully display the history of the city and the castle, complete with extraordinarily detailed large-scale dioramas, and should not be missed. Definitely try the matcha tea and wagashi (traditional Japanese confectionery) at the museum’s Café Kiharu and try out the large taiko drums in the gatehouse (everyone is welcome). 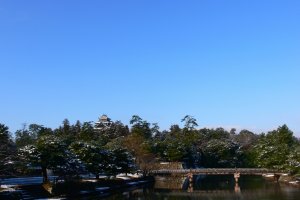 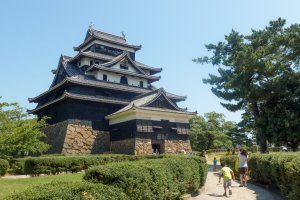 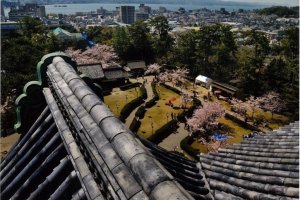 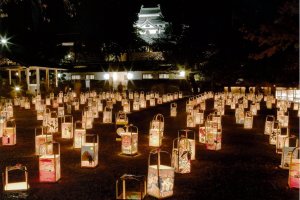 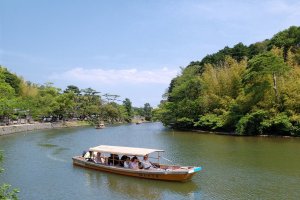 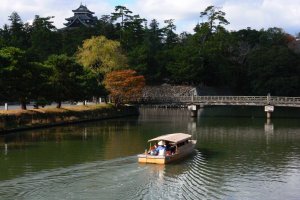 Elizabeth S 2 years ago
Lafcadio Hearn’s books on ghosts got me curious about Japan’s legends. I want to read more and then wander Matsue in his footsteps.
Reply Show all 0 replies

Kim 2 years ago
The view of Matsue Castle from Meimei-an is gorgeous! I was there in May when the azalea bushes were in bloom and the whole area was just breathtaking. Definitely worth a visit!
Reply Show all 0 replies
2 comments in total