Shinto ritual at the oldest horse archery range in Japan

Yabusame (流鏑馬｜やぶさめ) is a type of horse archery performed on the grounds of shrines, with 3 targets to hit along the range. It is a long standing tradition, with several preservation societies working hard to keep this ritual alive. Every year, on the first Sunday of April, crowds gather on the grounds of Washibara Hachimangu Shrine (Tsuwano, Shimane Prefecture), to take part in a Yabusame festival. The central part of the festival is the Shinto ritual itself. But there is also Kagura, (theatrical story telling for the gods) performances, the auctioning of the successfully hit targets, as well as food stalls.

Tsuwano was the old capital of Tsuwano Domain, a small castle town in the western part of Shimane Prefecture. The castle was built in 1295, and extended around the beginning of the Edo period in 1600. The making of Washi, (Japanese paper) and Sake brewing were developed as industries to strengthen the domain. During Tsuwano domain's long period of prosperity, the Washibara Hachimangu Shrine was erected. Just in front of the shrine is Japan's oldest purpose-built horse archery range, or baba (馬場｜ばば) , which was created some 500 years ago. There are more than 100 Sakura Cherry trees planted along the track that give a beautiful white background to the festival when in full bloom during April.

At the beginning of the festival (around 10:00 AM), the riders visit the shrine for the opening ceremony. They line up together with their bows and arrows and are presented to the Hachimangu deity. Hachimangu is often described as the deity of war, but a more precise translation would be a deity of archery and the warriors.

After the short ceremony, the participants (riders, judges, helpers, monks), all line up and walk down the length of the range to meet the audience.

The riders take turns galloping along the track, aiming for the targets with heavy-tipped arrows. The blunt bang that can be heard when the arrows hits the target is echoed in a loud cheering and clapping from the audience. The riders are well trained archers from the Ogasawara Clan, founded in the Kamakura period (1185–1333). While they are representing a long generation of Samurais, the riders of today have normal jobs. For example one of sons of the head of the clan is a chemical researcher. The practice of the horse archery starts when their daily work is over.

The rectangular wooden targets are called mato, (的) and mostly break when hit by the heavy arrows. The ones that were hit are often auctioned off, with a signature of the rider and the clan. Such targets can be seen in some establishments (restaurants, ryokans) of the town.

The horse archery range was built in a time when Japanese horses were from a different breed. Smaller horses were used, with shorter legs than now, which makes a big difference. In the old days, it took about 28 seconds for the rider and the horse to run down the length of the range, hitting the 3 targets on the way. The horses used in today's festival are much bigger and it takes them about 15-16 seconds, or about half the time to finish one run. This puts a lot of pressure on the riders, as they have to be twice as fast as the Samurais were.

There is a free shuttle bus service from Tsuwano Station to a Nagomi Roadside Station, which is 5 minutes walking distance from the Yabusame Festival. 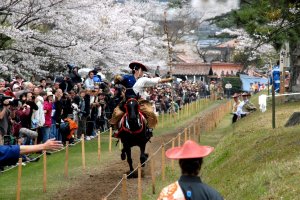 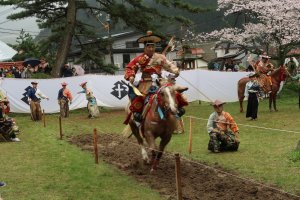 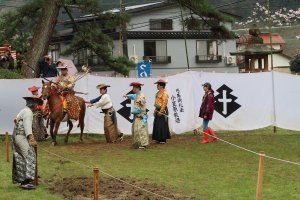