An island sea park only accessible by boat

Once connected to the mainland by a cable car, nowadays the only way to get to Awa Island is by boat. It is a short and pleasurable boat ride from mainland Numazu to the east pier of the craggy island. The small uninhabited island is home to a marine park, a restaurant, an illuminated tunnel, a monument and a luxurious hotel. There are also a couple of small shrines on the island.

It is one of our favorite aquariums in all of Japan, although, by definition, it is less an aquarium and more a sea park. Almost entirely outdoors, it is the perfect place to visit sea life during the pandemic. Sea life at the aquarium includes dolphins, penguins, seals, turtles and frogs. They have the largest frog house in Japan.

Awashima Marine Park is, in my opinion, one of the most underrated places in Numazu City. Most of the tourists go to Mito Sea Paradise or the Numazu Deep Sea Aquarium. It may be that the boat ride turns people off, but for us it was the initial allure. What I love most about Awashima Marine Park is that the dolphins have large pens right in the open sea. Another thing I appreciate is that at Iwa Island you can get up close to most of the sea life. The marine park isn't actually that large, spanning no more than 500 meters. Neither is the island for that matter with a perimeter of just 2.5 kilometers, you could walk it in less than an hour.

Located on the boardwalk, perched on the sea, the restaurant affords stunning views of the island and the mainland. But the best of all: one side of the restaurant overlooks a dolphin keep in the open sea. The restaurant is, no surprises, a sea food restaurant. It is reasonably priced, considering its location, with most meals costing less than ￥2000. The restaurant is open from 11 am to 3 pm, except for Saturdays when it opens until 4.30 pm.

Tucked away on the north end of the island, behind large opulent gates is the Wyndham Grand Awashima hotel. There is a spectacular view of Mt Fuji from the hotel. They have an outdoor hot spring by the sea. Several famous people have stayed here, including the Imperial family and a former French President. The price of the hotel has come down considerably over the years. When we visited prices started from ￥60,000, but currently they have rooms for as little as ￥25,000 per person per night. Like the sea park, the only way to the hotel is by boat. They have a waiting room on the mainland where you can comfortably wait for the boat to pick you up.

The only access to the island is by boat or in theory you could swim to it! You can bring buggies and strollers on to the boat without having to fold them down, but you do need to take the children out of the buggy to do this. The journey only takes a few minutes and the boat comes every 15 minutes.

The boat ride is included in the 1,800 yen per adult admission cost to the marine park. The last boat to the island goes at 3.30 pm. There is parking by the pier. It costs 500 yen. The nearest train station is Izu-Nagaoka on the Izuhakone Railway line. The station is just under five kilometers from the pier as the crow flies, but due to the landscape the walk is about seven kilometers. Therefore, getting a bus or taxi from the station is advised. 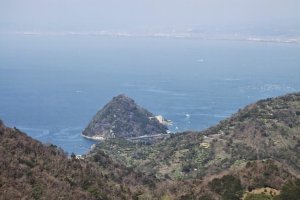 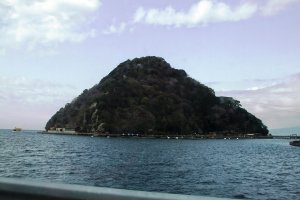 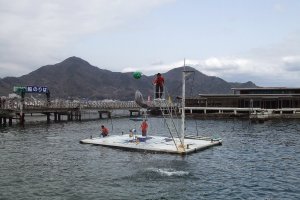 Elizabeth S 3 months ago
Sea pens for dolphins is always a relief to see. The aquarium at Shimoda City also has sea pens. When I was there, the dolphins were curious and fun.
Reply Show all 1 replies

Lynda Hogan Author 3 months ago
Me too, Elizabeth. I love dolphins and hate seeing them in small aquariums. The dolphins at Awashima are really friendly, so hopefully happy! :)
Reply

Sander van Werkhoven 3 months ago
This could be the secret base of a Bond villain :-)

I had never heard about this place before, but I really want to visit it! I was just looking at the website of the hotel, it's hard to imagine a rotemburo with a more spectacular view than this...
Reply Show all 1 replies

Lynda Hogan Author 3 months ago
Right? This place was a hidden gem for so long. We stumbled upon it, by accident about fourteen years ago and have been back a few times over the years. I am glad to see though that it has increased in fame and popularity in more recent years. They deserve the business. And the hotel is out of this world.
Reply

Bonson Lam 3 months ago
Some many treasures to discover on this little island. I am dreaming of relaxing here with views of Mt Fuji, maybe fantasies of fireworks in summer reflecting on the water?
Reply Show all 2 replies

Lynda Hogan Author 3 months ago
Good question about the fireworks, I imagine there is at least one display you can see in the summer. Most of our visits have been in spring. We did visit once in summer, but for that trip we were staying quite a bit away in Shuzenji so we were long gone by the time night time came around.
Reply

Bonson Lam 3 months ago
Hope you can see them the next time around!
Reply
7 comments in total