Feed your ego at this inexpensive restaurant/bar

In England there's a chain of noodle restaurants called Wagamama, which translates into English as 'selfish', and is probably entertaining for Japanese visitors. I wouldn't have expected the favour to be returned, but looking around Hamamatsu one night for a place to have dinner, there it was, a bright blue sign boldly proclaiming 'Selfish'.

On a side street not far from Zaza City, it's close to the centre and easy to find. Once you get inside, the main dining room at the back actually looks a little plain, but I was sat at the counter in the cosier bar area, able to chat a little with the friendly staff. If it was lacking a bit in atmosphere, it certainly made up for it with the food, which was memorably tasty but very reasonably priced.

For my dinner I chose the chicken garlic saute for ¥850, which came with salad and rice, and the staff also brought me a little basket of bread to mop up the juices. The chicken was generously sized and perfectly cooked, succulent and full of flavour, the skin crispy and the meat tender. They were also generous with the garlic, which was tasty but not too sharp, though I imagine my breath would have probably still floored Godzilla for the next hour or so. On the side I had a dish of cubed avocado and foie gras in soy sauce and wasabi for ¥500, which turned out to be a great complement to the main dish, with the mix of flavours and textures all working together very nicely.

There's no English on the menu and few pictures to help; the theme is broadly European Mediterranean, with few surprises. There are pasta dishes for ¥900 including prawn carbonara, anchovy and tomato, and a concoction of eggplant, bacon and tomato; pizzas for ¥950 include spinach/tuna and blue cheese/tomato; salads and side dishes such as a cheese plate, seafood caesar, and spinach and bacon quiche cost between ¥400 and ¥850, while main dishes with meat or fish are from ¥500 to ¥1200, among them Milano pork cutlet, escargot in basil sauce, and fried oysters in garlic sauce. Soft drinks are ¥400, beer, wine and cocktails ¥600, desserts ¥400, including a Vietnamese apple cake.

So if you're in Hamamatsu looking for somewhere to eat that's not too expensive, I'd say Selfish is a good choice. 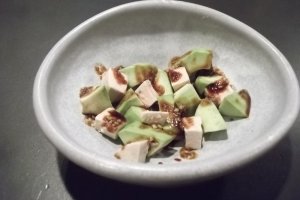 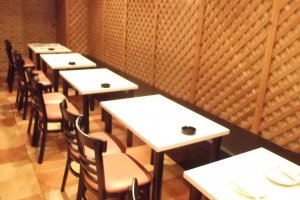 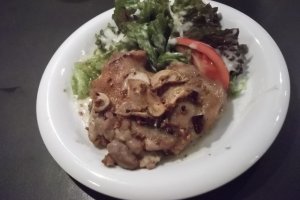 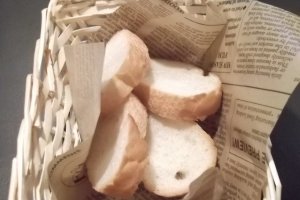 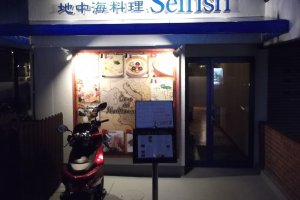 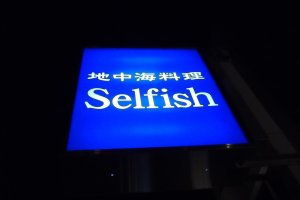