Around 100,000 azaleas comprising of 40 different types

Shizuoka's Komuroyama Park is home to an azalea festival held during Golden Week (from April 29th until May 5th) each year, and there are plenty of the lovely blooms to appreciate! The grounds are home to an impressive 100,000 azaleas in 40 different varieties, and they cover a space of approximately 35,000 square meters. There are also typically a range of flea market booths and food vendors to grab a bite to eat at.

If the overwhelming number of azaleas weren't enough to pique your interest, on clear days visitors can even catch a glimpse of Mount Fuji on the horizon.

For those planning to drive to the area, parking is available - however it does tend to fill up quickly during the festival season. 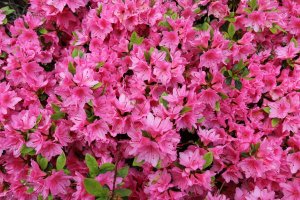 Elena Lisina a month ago
I loved Ito! Japanese name for azalea is tsutsuji?
Reply Show all 1 replies