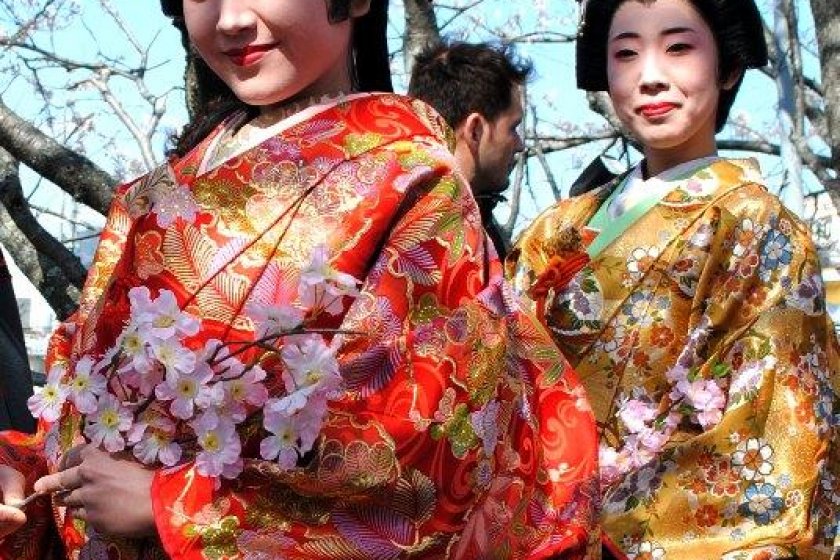 Early Apr
The princess and her attendant stoll down the path
Venue: Kiga Checkpoint When: Early Apr 2020

As festivals go in Japan, this is a very new one – only sixty years old. Located in the town of Kiga, the festival is about a forty-minute bus ride from Hamamatsu Station.

The parade starts in the town at noon, but an opportune place to catch the procession is as they head to the river. The river ‘stage’ area hosts a variety of performances starting in the morning. There are local dancing groups and brass bands. Food stalls line up in a colorful array with all the Japanese festival musts, offering their delights.

For a few hundred yen, you can purchase a small paper kite to decorate and fly. This is quite popular with the children. The kites are fashioned in the rectangular form of the traditional Japanese ones flown at the Hamamatsu Kite Festival which takes place a few weeks after the Princess Road Procession annually.

This small parade festival celebrates the history of the area. In the Edo period, daughters of noble families (called princesses) would travel along this road in spectacular processions befitting of their position. This event is designed to re-create that experience.

The parade makes its way slowly around the route, pausing for a dance here and there to entertain the crowd. The procession arrives at the river location around 2:30pm, with the princess and her attendants spectacularly dressed, walking slowly on the walkway canopied by cherry blossoms. There is a vanguard of samurai, and spear-carriers bring up the rear, while the female attendants carrying fans and flowers frame the princess in the middle. The wigs and clothes are beautifully styled and in gorgeous colors. The princess may be walking or if she is tired, riding in her palanquin carried by more attendants. Behind the palanquin is a large box of her belongings and more attendants. Just off the path is steep in some places, so be careful and beware of pushy photographers!!

I recommend finding a place on the route a little closer to the bridge to watch the parade, and then hurry down to the performance area. The princess and her people come down from the walkway and are introduced. The princess and her closest attendants are interviewed (the young boy attendant is portrayed by a woman), and the rest of the parade gets to have a bit of a rest while the others take turns performing some dances to music which seems to have been made just for the occasion.

After the dancing, everyone is allowed into the performance area to take pictures with and of the parade participants. The princess is positioned with her ladies-in-waiting and the young boy attendant in front of the palanquin for the ideal beautiful picture. Other members of the parade walk around, talking to friends, family, and tourists. In the spirit of the event, they are happy to have their pictures taken or for you to be in the picture with them. After a little while, the call came for the parade to continue along its path and for all non-parade members to exit the performance area.

The parade left the area, and we headed off too. I don't think there was much going on in that location after the parade left. Of course, the food stalls were still there, so we got some snacks on our way back to the bus. 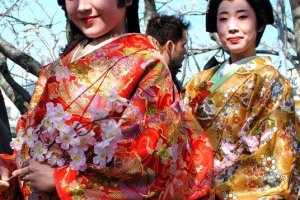 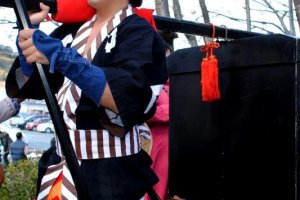 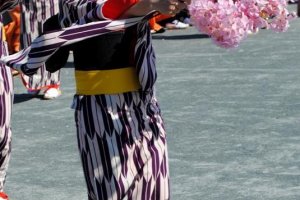