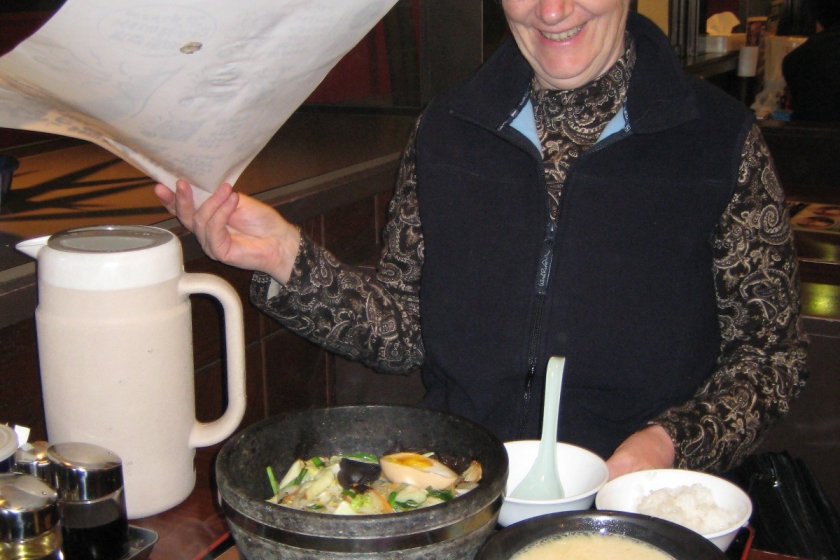 My mother is likely thinking here, "Am I expected to eat all of this? That bowl is equal in size to my fruit bowl at home!"

I like instant noodles as much as the next person, but I am not a fan of the real deal, ramen. Like soba, it took me years of trying to find a ramen I like. The noodles fill me up too quickly, and the typically oily, rich, salty broth doesn’t go down well. Look around any ramen restaurant, and you’ll find most folks leave their broth. Only eating the noodles while leaving the broth is weird where I come from, so I can’t help myself. I tend to want to drink the broth. All that said, I like ramen once in a while, especially in the winter when I have a cold, and especially Kazan's ramen.

Kazan is a chain restaurant. The name, Kazan, means volcano. At Kazan, your ramen cooks right in front of you in a heated stone bowl. You are given a paper placemat to hold up in front of you for protection while the server, with a flourish, pours the ramen into the bowl. “Swoosh!” a cloud of steam rises. The ramen bubbles and steams for a minute or two, and then it's ready to spoon into a smaller bowl. Call it experiential dining. I have introduced two overseas guests to Kazan, my 10 year-old niece and my 60+ year-old mother. Both very much enjoyed the experience.

Kazan offers salt, pork, soy sauce or miso-based broth. If you like spicy, they also have spicy options. I ordered white miso broth. While not as sweet as I expected, it was creamy and good. My ramen was topped with half a boiled egg. Lots of vegetables like matchstick-cut carrot, slivers of onion, chopped Chinese and regular cabbage, chopped domestic leek and bean sprouts were mixed in with the noodles. It's a hearty meal, which only costs about Y800. I ordered a plate of five gyoza for my four year old son, which was Y250 or Y300. We finished off with anindofu, a small sweet almond flavored gelatin dessert.

You don't waste your broth at Kazan, but rather, leave it to the end, then add a bowl of rice to the broth to make a delicious porridge. A bowl of rice is included with your order.

One may chose to sit at a table with chairs, or on tatami with a sunken pit under the table in which to place your legs, perfect for those who have a tendency to get cramped legs like my mother. At 6 PM on a Saturday, the restaurant was largely vacant but by 7 PM every table was occupied. Parking is usually ample at chain restaurants like this, and the Kazan on Heisei Dori, in Utsunomiya is no exception. Apart from the 10 locations of Kazan in Tochigi Prefecture, Kazan is also in Gunma, Niigata, Miyagi, Fukushima, Yamagata, Akita, Saitama, Kanagawa and Hokkaido. 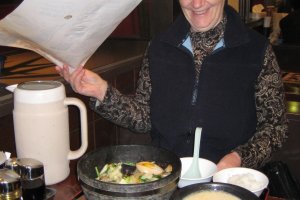 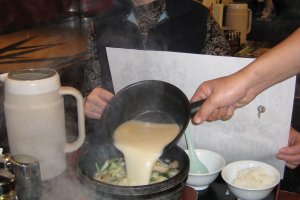 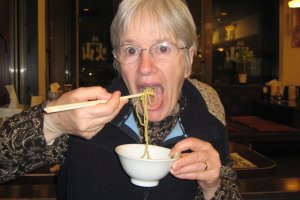 Odilia Sindy Okinawati 5 years ago
I am eager finding place which serve the food in stone bowl. Thanks for share :D
Reply Show all 0 replies
1 comment in total