At 1893 meters, Mount Miune is the second highest mountain in Shikoku’s remote Iya Valley - just 62 meters shorter than its neighbor Mount Tsurugi which is the most popular mountain among visitors in Iya Valley. However, by public transportation Mount Miune is the easiest accessible of the two and being less crowded than Mount Tsurugi it will provide you with a more authentic mountaineering experience.

During weekdays the infrequent buses that run through Iya Valley only go as far as Nagoro, also known as the Scarecrow Village because of the life-sized dolls that populate the entire village. Nagoro is located at the foot of Mount Miune and from here you can start your hike up the mountain along the main trail near a small camp that also functions as a parking lot. Another parking lot is located at the end of a dirt road that leads you higher up the mountain – thus giving people arriving by car the opportunity to start their hike closer to the summit. From Nagoro the climb to the top is about 3 hours, so if you start your climb early you will be able to return to Nagoro and catch a bus back before service ends in the evening. However, at the summit you will also find a mountain hut, where a large group of people can rest and even spend the night. This is a rather new and modern hut that was constructed recently after the old one was damaged during a storm. Right next to the hut is a small lake, that gets covered in snow during winter, so watch out if you visit Mount Miune during this period.

The hiking trails on Mount Miune are poorly marked so you also need to be careful on your way up as you might end up getting lost. Most of the hike takes place in forest surroundings, where colored ribbons around the tree trunks act as your guide. Some places you will even see fences that prevent you from taking a wrong turn, so make sure you end up on the right side of these. On cloudy days you will find yourself getting surrounded by fog when you slowly enter the clouds as you get closer to the summit. At some point you will break free from these and, unfortunately, they will most likely obscure the view later.

As you get closer to the summit of the mountain the trees will gradually disappear around you, and you will be able to admire the rich landscape. But from here on the hike gets serious since the trail now consists of slippery rocks which requires you to look down, as it is very important that you keep your balance. The mountain is very steep, so one wrong step can end up being fatal. During the warm period the summit is covered in high grass that makes it harder for you to locate the trail and see where to place your feet. This grass, however, is what makes Mount Miune a spectacular sight when you finally reach the top, as it makes the entire mountain look like a wavy field. Maybe you will spot some of the deer that live on the mountain and these might be the only living things you get to see during your climb. At the summit you will most likely find yourself alone, so from there you are able to enjoy the silence and the stunning sight of Iya Valley.

Take a bus from either Ikeda or Oboke to Kubo where you change to another bus that will take you to Nagoro. During the weekends and on holidays from April til November the bus goes as far as Minokoshi: the foot of Mount Tsurugi.

I have a Bachelor degree in Japanese Studies, and every year I go to Japan by my self to experience new parts of the country. I am the owner of Denmark's largest Japan themed homepage Japanoholic, where I write about Japanese culture, history and local attractions. 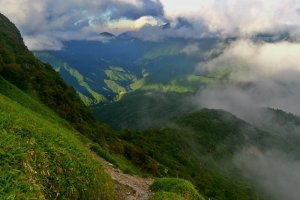 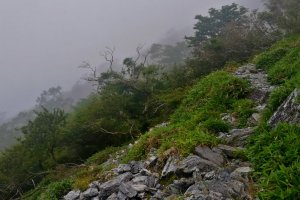 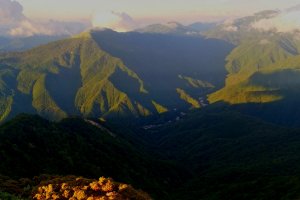 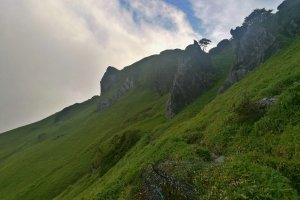 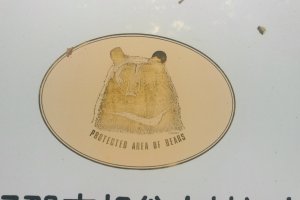 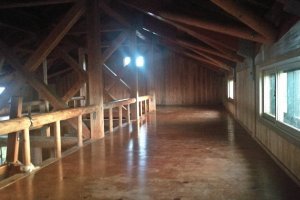 Geraldine Buergel 2 years ago
The pictures look incredible! Would it be possible to hike Mt. Miune on one day, spend the night at the hut, get an early start in the morning and do Mt. Tsurugi the next day?
Reply Show all 2 replies

Yonatan Friis Author 2 years ago
I think you can do both mountains in one day since they are connected but because of the irregular busses you might end up sleeping on one of them anyway. The last bus departs from Tsurugi at 3 pm so you might have to start very early if you want to get down from Miune, climb Tsurugi and then descent again in order to catch the bus. It took me 3 hours to climb Miune and I started late because I had to stay at the hut. I spent the entire day going in and around Iya Valley so climbing 2 mountains in one day should be no problem but you will most likely strand at one of them. There are also huts at Tsurugi and you can "climb" or descent it using a chair lift
Reply

Geraldine Buergel 2 years ago
I see, if the last bus is already leaving at 3pm from Tsurugi then it might really be the best option to do both mountains in one day and only decent on the next day. That is very helpful information, thank you so much!
Reply

Kim 3 years ago
Those are some incredible views! I particularly loved the one with the rocky landscape!
Reply Show all 1 replies

Yonatan Friis Author 3 years ago
It was an amazing landscape. I felt like I had arrived in New Zealand and the fog (clouds) also gave it a fairytale like feel.
Reply

Did you stay in the mountain hut? How was it?
Reply Show all 2 replies

Yonatan Friis Author 3 years ago
Yeah I stayed there in July and even though it was during the heatwave the hut got very cold because it is made of wood and it is located in high altitudes. I only traveled with a small bag so I didn't bring any blanket, so my advice for people would be to bring some kind of blanket cus it is freezing. Also some kind of sleeping pad since the floor is a naked wooden floor. When I arrived there were already 2 Japanese guys in the hut but they were quiet and kept to themselves. I think there is room for about 30 people as there is a lower section and an upper section. As you might see on the last photo I slept in the upper section. There are windows so you can admire the sunset or sunrise, and there is a small toilet outside few meters from the hut. I actually chose to climb Mount Miune because of the hut cus I knew that I would not be able to catch a bus out of the valley the same day that I arrived so the climb was mostly just to get to my (free) accommodation and getting there was an unforgettable adventure. One of my best memories from Japan ever.
Reply

Elizabeth S 3 years ago
Invaluable information for visitors there. Thank you.

That’s a good point to bring thermal clothing or blanket even in summer. I got caught on a mountain in Tochigi on a summer night. It got cold.
Reply
8 comments in total