A journey back in time

Japan’s vast Nishi-Awa region is dominated by rugged mountains and untamed rivers. This wild corner of Shikoku’s Tokushima Prefecture boasts a hospitable and rustic culture, unique to this part of Japan, born out of Nishi-Awa’s rugged isolation.

For those visitors looking for an authentic rural experience, Nishi-Awa delivers – offering the chance to stay on local farms, try traditional farming as well as local activities too. But what makes Nishi-Awa itself so special?

Nishi-Awa enjoys a warm Mediterranean-like climate as a result of its proximity to the Seto Inland Sea. It is comprised of four municipalities, including Mima and Tsurugi, both former homes to a thriving indigo dyeing industry, the historic legacy of which remains to this day. Miyoshi City, the largest municipality in Nishi-Awa, is home to the highest mountain in western Japan, and an abundance of cultural, culinary, and outdoor experiences. Lastly Higashimiyoshi, which is home to farmers markets and spiritual religious sites.

Nishi-Awa’s first hamlets and towns were established on mountainsides and peaks high above the valley floors. Steep mountainsides are not conducive to growing rice but perfect for growing soba buckwheat - the staple of the area, as well as Japanese satoimo potatoes that flourish in the well-drained soil of the terraced farm plots.

Sobagome-zōsui, a centuries-old traditional dish, is a hearty porridge made from dried soba grains cooked in a light broth with sato-imo potatoes, meat or chicken, vegetables, and mountain sprouts. It’s served at restaurants and hotels throughout the region and is often accompanied by dishes of wild game meats, known in Japanese by the French word “gibier,” such as wild boar (inoshishi) and deer (shika). Gibier is often paired with locally crafted junmai-shu sake for maximum flavor enjoyment. River fish like ayu, amego, and Japanese rainbow trout, are another signature of the region – often spit-roasted on bamboo skewers over a charcoal brazier until crispy.

The purity of Nishi-Awa’s water is perfect for brewing Japanese sake (“nihonshu” in Japanese). Miyoshi City is home to four healthy craft sake breweries, Miyoshiki-shuzo, Imakomachi, Yagawa-shuzo, and Hōsui-shuzo. Sweet floral sake is produced in the spring, with mellower and more full-bodied flavors coming out in the fall once the sake has had time to mature. It’s served hot or cold and pairs wonderfully with local dishes.

Indigo plants thrive throughout Japan and create a dye that produces glorious shades of what is sometimes called “samurai blue.” During the Edo-era (1601-1868) a roaring trade in indigo and indigo-dyed products flourished in the parts of Nishi-Awa that had access to the navigable stretches of the Yoshino River. The elegant homes of Nishi-Awa’s indigo merchant’s, and the opportunity to try your hand at indigo dyeing, can be experience in the town of Sadamitsu in Tsurugi, and in Wakimachi in Mima.

Ochiai Village (Ochiai-shuraku) is a small mountain hamlet located near the confluence of the Iya and Ochiai Rivers in Higashi-Iya. The origin of the village has been lost to history but legend speaks of the Heike people, the survivors of a clan defeated by the armies of Heian Era Japan (974-1185), settling the area a millennia ago. The present village sits on a steep slope and is home several traditional farmhouses built from the mid Edo-era to the early Showa-era (1926-1989). Eight of the traditional thatched roof cottages, known as Tougenkyo-Iya, have been renovated and restored as vacation rentals! The cottages have all the modern amenities necessary for a comfortable and relaxing stay.

Miru ahou (The watchers are fools)

Odorana son, son? (So why not dance?)

Such is the chant that grew out of Hachisuka Iemasa’s, the Daimyo Lord of Awa Province (present-day Tokushima Prefecture), drunken opening of Tokushima Castle in 1586. The event has grown into a 3-day dance festival that takes over Tokushima City and many other municipalities in Tokushima Prefecture every August. Nishi-Awa’s most famous Awa-Odori event happens in the town of Awa-Ikeda on August 13th and 14th. It features several teams of kimono-clad dancers performing both the traditional Awa-Odori dance, and their own unique choreographed dance routines. The main event takes place at Harakko Park next to Awa-Ikeda Station.

Experience the countryside life with a farm stay, at one of

many farmstays that can be arranged in the area! Live like a local at one of these comfortable, family-owned ‘minshuku’ lodgings that can provide meals for guests too.

Live and work beside local farmers and learn traditional farming techniques like green tea picking, and planting, harvesting and caring for crops like fruits, vegetables, soba, and mushrooms.

Learn how to identify and harvest wild mountain plants and—most delicious of all—how to prepare and cook traditional foods like soba and udon noodles, sobagome zōsui, and hirara-yaki - a thick and hearty stew of river fish, vegetables and tofu enclosed by a ring of miso paste and cooked on a flat rock.

Nishi-Awa is located in the far west of Shikoku’s Tokushima Prefecture and is most quickly accessed by flying to either Takamatsu or Tokushima Airports, taking a highway bus to JR Tokushima Station and getting the Tsurugi-San or Shimanto Express Trains from there to Awa-Ikeda. Alternatively, one can take the Shinkansen to Okayama and transfer to the Nanpu Express. Highway buses also run from Osaka to Awa-Ikeda, Miyoshi City, and Wakimachi. There are several stations on the JR Dosan Line in Nishi-Awa, but renting a car or taking a taxi may be the most convenient way to get around. 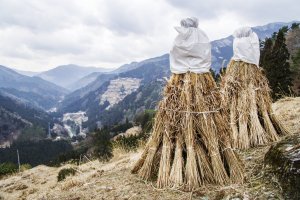 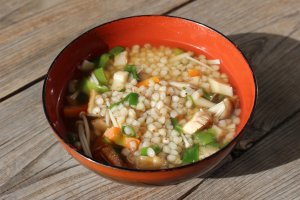 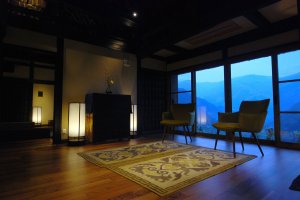 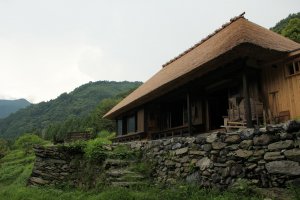 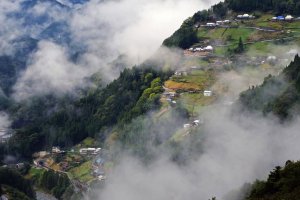 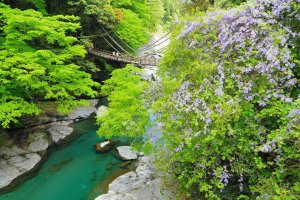 Kim 2 years ago
What a great experience! So much natural beauty in this part of the world.
Reply Show all 0 replies
1 comment in total