Finding decent Spanish-inspired cuisine in Tokyo is not impossible, but while many places can make a passable paella, finding high quality, memorable meals is more of challenge. Fortunately, there's the Marunouchi district, where restaurateurs are challenged to deliver the best food or get replaced within a few months. It is here where you can typically find the best that Tokyo has to offer, and ADRIFT by David Myers stands among the top in the area.

Chef David Myers is known as the Gypsy Chef (his actual trademarked nickname) for traveling the world relentlessly after establishing himself in his home city of Los Angeles. He has opened several ADRIFT restaurants, most notable atop the Marina Bay Sands Resort in Singapore.

ADRIFT Tokyo brings the same Spanish-inspired meals to Japan, but with a twist. Myers's menu prides itself on its inspiration from the Basque and Catalonia regions of Spain, so there are unique choices for patrons not found in other Spanish restaurants in Tokyo or broader Japan.

Most of the food is served Tapas-style, meaning menu options offer smaller portion sizes with the expectation that guests will try several different dishes. That said, the portion sizes were still decent enough that one person could easily be full on two choices, or four split between two people, etc. For example, when I went, I had the raw madai and avocado orient-style salad with yuzu vinaigrette and the "El Classico" shrimp, clams, mussels, and saffron paella, and those were more than enough for me. To note, there were a wide variety of meat and vegetarian options on the menu that were also enticing.

Pricing at the restaurant tends to be at the higher end, and you can expect a meal for two costing anywhere between 5000 and 15,000 yen depending on food and drink choices.

There is indoor and outdoor seating, and a reservation is generally not needed on weeknights (though if you are traveling with more than four people, be sure to call or reserve online ahead of time). One of the more interesting features of this restaurant is that unlike most in downtown Tokyo, ADRIFT has child seating available.

ADRIFT is only a five minute walk from Tokyo station or three minute walks from Nijubashimae, Hibiya, and Yurakucho stations. It is located at street level of the Tokyo Fuji Nijubashi Square building. 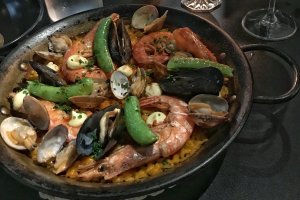 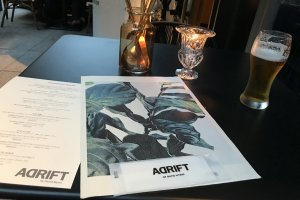 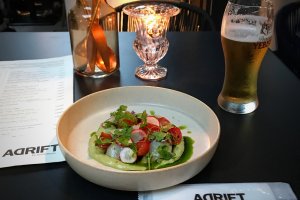 Elizabeth S a year ago
It’s always a treat to find international and in this case regional cuisine in Tokyo. And so close to Tokyo Station.
Reply Show all 0 replies

Kim B a year ago
Outside dining is always nice at this time of year!
Reply Show all 0 replies
2 comments in total