Hot on the heels of Japan’s stunning success at the PyeongChang 2018 Olympic Winter Games, there is no doubt that in Japan itself interest in sports has been renewed with fresh vigour, not least for the Olympic Summer Games of 2020 and also for the Rugby World Cup 2019 which will both be held in Japan. For international visitors too these must-see events have also put Japan well and truly on the sporting map, and while these are sure to be fixtures destined for the history books it has awakened a more general interest in sports and outdoor activities across Japan, opening up in the process a break from the fixed Tokyo, Kyoto, and Osaka, urban routes that have defined trips across Japan up until now.

Thanks to this increased exposure, visitors are starting to get a glimpse of what has been at the heart of Japanese appreciation for the natural world for millennia: that beyond the cherry blossom season, each and every location is well-worth witnessing in the four seasons. But more than that, that a single trip to Japan can take you through several seasons as you traverse the scope of the archipelago. A holiday in March could net a visitor not only the aforementioned blossom and quintessential views of Kyoto and Nikko, but also snow sports up in northern Tōhoku and Hokkaido, while the southern islands offer marine activities and sun-kissed beaches.

However, more than the weather that gifts you with a particularly generous snow season and semi-tropical islands, it is the accompanying culture of the archipelago that serves as a constant reminder of just how diverse Japan is. Whether you take to the piste or the seas, and whatever the weather you are always guaranteed a taste of Japanese washoku cuisine with a local twist, and natural onsen waters that vary even within a region.

Join us as we take a brief tour from the northernmost extremes of Hokkaido to the southernmost reaches of Okinawa all undertaken back to back in early spring. Along the way we capture Japan as it gears up for next year’s Rugby World Cup, with the Olympic and Paralympic Games of 2020 never far away.

A short flight away from Tokyo, and at roughly the same cost as the shinkansen to Kyoto, Hokkaido is infinitely more accessible than you might think, and the moment you step off the plane you know you have reached an area of Japan with a character all its own. Even the city of Sapporo itself, the largest in Hokkaido, with its grid layout is unique amongst Japanese cities and most likely to be your first stop. With the legacy of the 1972 Olympic Winter Games still tangible in the city and its central Sapporo Dome stadium home to the Rugby World Cup 2019 and football for the 2020 Olympics, beyond all the vibrant culture of the city itself, it is perhaps the sense of competition that is most palpable.

There is no better example of this spirit of competition than the Hitsujigaoka Observation Hill which looks out over the city. There as if saluting the Sapporo Dome itself which stands out above all other landmarks is a statue of Dr. William Clark with a phrase that has called to much of the Hokkaido youth “Boys, be ambitious” etched beneath. Needless to say in the spirit of the games this sentiment now extends to all, and it is a useful reminder that Hokkaido was one of the last regions to be developed in modern Japan. Dr. Clark himself came to Japan in the late 19th century to teach western agricultural techniques at what is now Hokkaido University, and his spirit of ambition as well as cultural exchange that transformed the region is now one that resonates deeply in the culture of the area.

Exemplifying this energy is the Sapporo Snow Festival held in February each year across a number of sites in central Sapporo, a mix of competition and culture as teams build vast sculptures in Hokkaido’s pure white snow, depicting targets as diverse as popular anime and video games mascots, next to motifs from the Olympic Games and iconic landmarks from around the world. The Sapporo Snow Festival Museum can be seen all year round at the Hitsujigaoka Observation Hill, but if that has you in the mood for competition proper then the Sapporo Olympic Museum at the seat of the Okurayama Ski Jump Stadium should be your next stop. In addition to the ski jump stadium which you can climb for yourself and feel the intense vertigo the athletes must feel as they hurtle down the jump from the comfort of the observation deck, the museum captures the unique Japanese connection the country has with winter sports. From Japanese geta sandals fitted with ice-skating blades from pre-modern Japan and the Imperial households own collection of antique skis that span the centuries it is a museum that tells the tale of how Japan’s relatively young history in Western winter sports has become a firm favourite among the its people, and its athletes a force to be reckoned with on the global stage.

Sapporo cuisine likewise is frequently influenced by the west’s influence in the Meiji era (1868-1912) industrial revolution. Even downtown Sapporo favourites such as ramen are frequently mixed with sweetcorn and butter, and the city’s most iconic export, Sapporo Beer is of course a western import too. Still, enjoying a tankard in the Sapporo Biergarten in central Sapporo reminds you that while western in origin, this is now very much part of Japanese culture, removed from its origins so that it has become a Hokkaido Heritage destination that even Europeans will feel like a guest.

Well fed it is probably time to work of that food, and here too you are spoiled for choice with a huge selection of resorts within easy distance of Sapporo itself. Ours is Tomamu operated by Hoshino Resorts that includes accommodation options that span the family friendly Club Med to elegant options in Tomamu Towers for those looking to take in the stunning scenery that surrounds you in splendid isolation.

As you would expect, Japanese omotenashi hospitality extends from the locker rooms to the piste, and you will find top-class equipment rental to match the quality of the snow outside. For the uninitiated the various skiing and snowboarding routes are maintained to a seriously surprising degree and the powder snow conditions are well-worthy of their excellent reputation. Beyond the pistes the surrounding nature is simply stunning, and you can instantly see why the surrounding mountain ranges were revered as god’s among Hokkaido’s indigenous Ainu people whom the island is still home to.

To get even closer to the nature snowshoe trekking offers a more leisurely way of experiencing silent snowy glades, and perfect landscapes punctuated only by animal footprints in the snow. With an experienced guide a trek can highlight just how Japan’s snowy landscapes are different from those elsewhere in the world, not just in their wild and plant-life, but also the natural hot onsen springs that frequently interrupt the volcanic sculpted peaks. At the end of an adventurous day said steamy onsen are your reward, yours to enjoy as those before you have done over the centuries.

As with Hokkaido, Okinawa was one of the last territories to become part of the archipelago of Japan, the country being divided into feudal fiefdoms before modernisation. As such, as with the still-prevalent culture of the Ainu that is still tangible in Hokkaido in parallel to Japanese culture, in Okinawa you will find the culture of the Ryukyuan people as part of the identity of the islands. Not only that, but as you begin to explore from the airport you may well be reminded that there has been an American military presence on the islands that too has historically moulded the shape of the island’s culture.

This hybrid culture reminds us that while there is clearly a strong sense of shared culture in Japan, that regionally there is so much you have to travel to understand for yourself. As you eat teppanyaki, a favourite in Okinawa and born out of adapting Japanese cuisine to western tastes, the succulent beef may not have been part of the Japanese diet in pre-modern times, but at the same time Japanese beef is now recognised as some of the finest in the world to the point where it is an attraction in and of itself. Enjoyed with a local craft beer as the chef cooks the meat to your taste with great flair, every delicious bite becomes an appreciation for the complex history that has shaped the history of the islands.

On the sporting side of things, Okinawa’s most famous export might well be for many their first encounter with the country, karate. Originally developed as a means of peaceful self-defence on the islands where weapons were largely banned, Okinawa is the seat of Japanese karate and has already reached out across the globe. The Okinawa Karate Kaikan in the capital city of Naha is the guardian of this culture, that will be an exciting new addition to the Olympic Games as of 2020. Crucially this is a chance for the world to see authentic karate, not just stressing bouts, but also kata or forms. These patterns of movements are the essence of Okinawan karate and involve no opponent, simply demonstrating correct form perfected over countless hours but never use to hurt or harm.

From there Okinawa’s multitude of marine activities are yours to enjoy from Naha or the resorts that put you in touch with nature to the north of the island. Even in the winter months, which are also perfect for whale watching as humpback whales migrate south past the Japanese archipelago, the clear waters are warm enough for diving and other sports. The islands stunning blue waters, and incredibly diverse coral reefs are the perfect backdrop to any activity, reminding you as you levitate out of the seas with a water jet pack or snorkel deep within them, of the island paradise you are surrounded by.

To get closer to nature Gesashi Bay as part of the recently designated Yambaru National Park provides an excellent opportunity to venture beyond the beautifully maintained resorts that dot the island towards a real encounter with Japanese nature. The sub-tropical mangrove forest is lush and calm as you glide through it by kayak, spotting local flowers and wildlife as you go. The waters are even clean enough to be used in the local Orion beer which is coincidentally the perfect way to relax in the shade after your exertions.

It is hard to remember as you go from snowy wonderland to island paradise that this is all part of the same Japan, harder still when you return to the impossible scale of Tokyo and all its own diverse culture. Still, it is a country and culture united, and through the Rugby World Cup and Olympics that all seek to involve every part of Japan, hopefully the wealth of regional variety of Japan will soon find the audience it truly deserves.

Olympic Stadium Under Construction in Tokyo 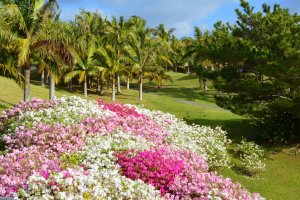 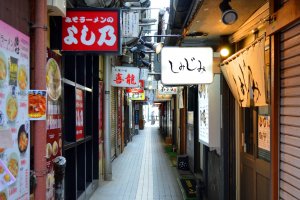 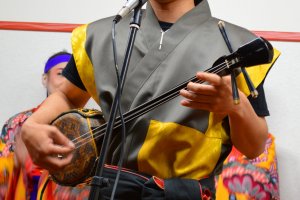 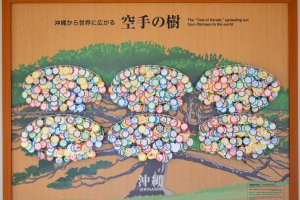 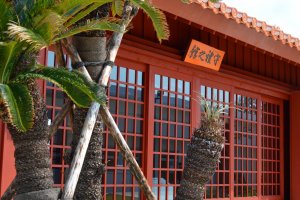 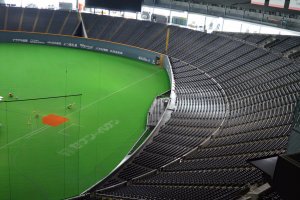