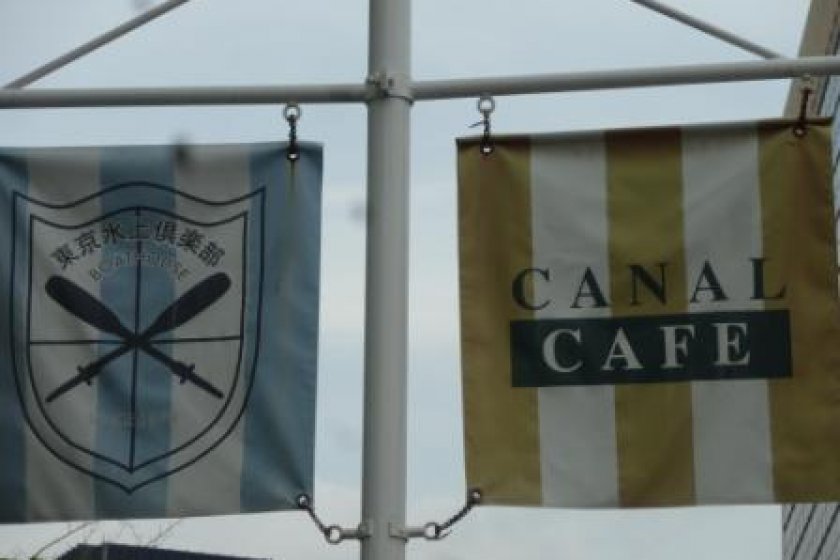 If you are looking for a place to chill out one afternoon, then I can highly recommend Canal Cafe, in the trendy suburb of Kagurazaka, located right near Iidabashi station. There aren’t that many places in Tokyo where you can eat outside and enjoy a nice view, but this is one of them.

I first came across Canal Cafe when I rode my bicycle past it one day during the cherry blossom season. At the time there was a huge line to get in. Given its location right on the river (more correctly part of the outer moat of the Imperial Palace), which is lined with cherry trees, I can certainly see why. I didn’t go in that day, but a few months later I went there with a friend one afternoon. It was a weekday, but it was still packed with women and young looking couples (no doubt students from one of the many nearby universities).

Canal Cafe consists of quite an upmarket looking restaurant, and also a cafe. We tried the cafe. When you enter there is a counter displaying all the sweet food and the menu. You must order here first, and then you can grab a table anywhere along the deck. We only had a muffin and coffee/tea, but the menu has more substantial food with an Italian theme (Panini, pasta, pizza etc.). From what I saw, these looked pretty good. The muffins, although small by Western standards, were very tasty, and the drinks were good too. If you order anything other than the small sweet items, you are given a buzzer to take to your table, which goes off once your food is ready. You then go back to the counter to collect it.

Probably more important than the food though, is the atmosphere. Particularly in summer, Canal Cafe is great, as the breeze off the water, coupled with the green trees, almost make you forget that you are in the middle of summer in one of the busiest cities in the world! There are also rowboats for hire if you feel like doing some exercise, rather than just relaxing on the deck! 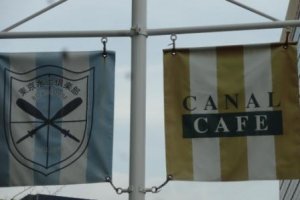 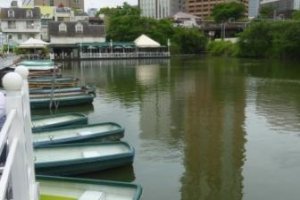 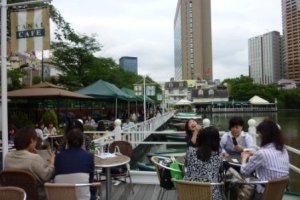 Wouter Thielen 6 years ago
A good way to end your day of strolling in Kagurazaka would be having a cup of coffee, with optionally a piece of food, at the Canal Cafe. One of my favorite places to rest and relax in spring/summer.
Reply Show all 0 replies

Olga 6 years ago
We will definitely visit in a sakura season. Every sakura has a number here
Reply Show all 0 replies

Paul Arenson-Kawano 9 years ago
The only thing to be aware of is that the moat can stink in the very hot summer season. In which case, indoors might be best.
Reply Show all 0 replies
3 comments in total