Enjoy an afternoon tea with a yellow floral theme

From May 14th (Friday) until June 29th (Tuesday), the Conrad Tokyo is hosting an Early Summer Afternoon tea which takes on a vibrant yellow and floral theme. Some of the desserts at the event will include the likes of a pitaya and jasmine jelly, an almond milk panna cotta, a mango mousse, and a lemon tart, and the savory options include options like a falafel mini burger, a yellow gazpacho topped with a soy milk cream, and a hummus and vegetable tart. Plant-based eaters will be happy to know that quite a number of the offerings at the event are vegan-friendly.

The standard afternoon tea set is priced at 6200 yen per person, and reservations can be made via the official Conrad Tokyo website. The website also lists which food options are vegan friendly with an asterisk beside them.

The Conrad Tokyo is located just three minutes on foot from Shiodome Station. 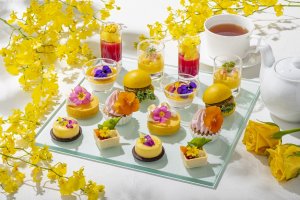