I wouldn't call myself a haute cuisine aficionado by any stretch of the imagination, but one of my dear friends is the textbook definition of one. He works as a chef back in Australia, and when he visited Tokyo while I was living there a few years ago he insisted we go out and eat at a Michelin-starred restaurant. I was reluctant, but he said it was the one experience he wanted to have in Japan, and that he'd foot the bill. Very well, I thought!

Ginza Kojyu is the kind of place that really is a once in a lifetime experience. At 20,000 yen per person for the lunch course or 30,000 yen for dinner, it's probably the most expensive meal I've ever had (or will have), but it really is the crème de la crème of food quality, preparation, and presentation. Reservations are required in advance, and it's not something that you can organize before arriving in Japan as they only take domestic bookings. If you don't speak Japanese and want to make a reservation, I would recommend asking your hotel concierge to help you out.

The restaurant itself has a sleek, minimalist Japanese style interior, with eight counter seats and three private rooms. One of them is a tatami floor room which seats six people, and the other two are regular Western-style tables which seat four people respectively. Since it was just my friend and I, we were seated at the counter, which ended up being the best possible outcome since we were able to chat with the chef and watch him prepare our food in front of our eyes.

One thing worth noting about a visit to Ginza Kojyu is that you don't get to pick and choose menu items here - it's all "chef's choice", which is great if you're the indecisive type. Almost all of the dishes were seafood based, except one which was some of the most phenomenal wagyu I've tried. There is also dessert served at the end to cap your meal off with something sweet.

The food pushed my boundaries as someone who isn't a huge seafood eater, but my friend was thrilled with every course and raved about the flavors, textures, and presentation. For me, the most memorable part was just how engaging the whole experience was. Watching the chef up close, having him explain every step of the process to us (in English, too!), and being able to meet the rest of the crew in the kitchen after we had finished our meal really left an impression on me. It opened my eyes to food as an art form, and inspired other cuisine-based travel adventures afterwards. 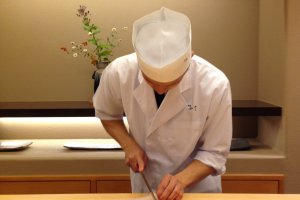 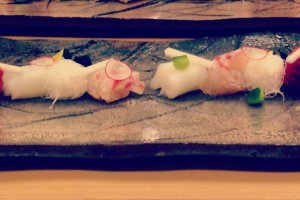 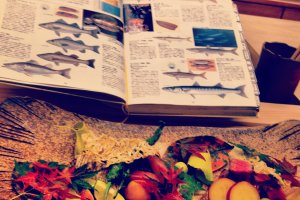 Elena Lisina 3 weeks ago
So teasing! ((( But I never can afford that.
Reply Show all 2 replies

Kim B Author 3 weeks ago
It's really expensive. My friend paid for me - he wanted someone to share the experience with - but I don't know that I would personally ever drop that much money on a meal. It's his passion though, and I guess everyone has something they enjoy and happily spend money on. I am more a cheap bowl of ramen kind of person, though!!
Reply

Elena Lisina 3 weeks ago
Me too! :D
Reply
3 comments in total