The Kojiya Awa Odori is held along the town’s shotengai (shopping street) where roughly 600 spectators join – lined up 10 rows deep – to watch the dancers and cheer as they pass by. There are about 150 kids who also participate in the performance, which is one of Ota City's summer highlights.

Awa Odori is known as one of the more energetic Japanese festivals due to the style of dance performed. It originates from Tokushima on the island of Shikoku. The Awa Odori is a folk dance unique for its irregular and energetic movements. It is said that the dance started out as a celebration of the newly-built Tokushima Castle; supposedly the townspeople happily guzzled sake until they broke out into a drunken dance that became known as Awa Odori. 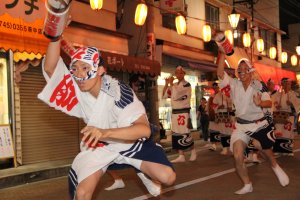 Elena Lisina a year ago
Funny history, but the festival is really joyful and energetic!
Reply Show all 0 replies
1 comment in total