The saddle-hanging pine tree of legend

The stocks of the Minamoto Clan had risen immensely since the end of the Former Nine Years War in 1063. Lead by the astonishingly capable warrior, Minamoto no Yoshiie, the Minamoto rose with military power and earned the right to rule over the northern provinces of Japan.

But success brings with it its own trials and the Kiyowara, once allies of the Minamoto twenty years earlier in the Former Nine Years War, had begun proving themselves poor stewards in the north. Agitating against Minamoto rule far from Kyoto, house Kiyowara earned the ire of Minamoto no Yoshiie. Now known as Hachiman-taro - the Son of the God of War - the Kiyowara would soon have a fight on their hands.

The divine warrior declared his intentions and without any formal authorisation from the government in Kyoto, Yoshiie gathered up his troops and headed out to lay down the law in the northern province of Mutsu, now the Tohoku region of Japan.

Travel by horseback was convenient, but also tiring and on his way, Yoshiie stopped to rest in the area now known as Suginami City. Unsaddling his ride, Yoshiie found a pine tree on which to hang the saddle and allow his horse to rest. While peaceful for the moment, the subsequent three years would see some savage warfare in the distant north. Minamoto no Yoshiie would eventually emerge victorious, but on that day, in Suginami, the legendary warrior would rest, his future unknown.

With its twisted trunk bending towards the sky, Kurakake no Matsu - the saddle-hanging pine tree - lies on the road to Omiya Hachimangu Shrine in Tokyo's Suginami City. Surrounded by homes, roads and telephone poles, this lone pine tree has hundreds of years of legend behind it, a living memorial to one of Japan's most legendary sons.

The tree is about a 15-minute walk from Nishi-eifuku Station on the Keio Inokashira Line. 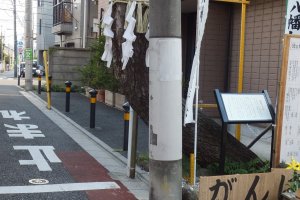 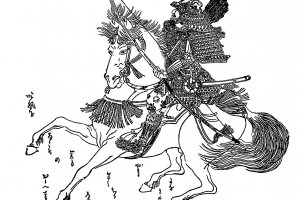 Elena Lisina a year ago
In what year it happened? I bet it was before Minamoto no Yoshitsune time, right?
Reply Show all 3 replies

Elena Lisina a year ago
Minamoto family seems to have quite long life! And it was full of wars...
Reply