A touch of the creative

History says that Mitaka City was once a hawking field in the Edo period. These days, though, the city is most famous for its world renowned Ghibli Museum and ever popular Inokashira Park. The city also as numerous points of history and landmarks all laden with touches of style and sensibility. Here is a simple introduction to some of these locations and how to reach them.

Located in Zenrin-ji Temple, the Grave of Osamu Dazai is the final resting place for the late author, Osamu Dazai. Known for his semi-autobiographical writing style, Dazai's works are considered to be modern classics in Japan and his passing at the very young age of 39 due to suicide gives his works an added degree of poignancy.

An 11-minute walk from Mitaka Station on the JR Chuo Line.

Officially recognised, the Michishirube Road Marker once directed Edo period pilgrims seeking out Inokashira Benten Shrine for worship. One of the marker's unique features are the many names of patrons inscribed onto it, particularly those from the entertainment industry of those times.

A 9-minute walk from Inokashira-koen Station on the Inokashira Line.

The Yoshinao Nakata Monument sits in Inokashira Park where Nakata himself strolled through while coming up with the much loved children's song, 'Chiisai aki mitsuketa' (Found a Little Autumn). Styled in the form of a piano, the monument was erected in 2013 and features the lyrics to his famous song inscribed onto it.

An 8-minute walk from Inokashira-koen Station on the Inokashira Line.

Located on the grounds of the International Christian University, Taizanso was originally a villa for an important industrialist. A fire destroyed much of the building with the surviving structures, including a beautiful tea room and a one-tatami mat sized room, having important historical, aesthetic and architectural value.

An 8-minute drive from Shin-Koganei Station on the Seibu Tamagawa Line.

Find out more about Inokashira Park. 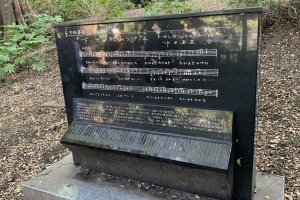