Musashino City may be known for its splendidly popular Inokashira Park and local atmosphere around Kichijoji Station but the city has quite the history with landmarks to go with it. From well-loved animals to World War II reminders, here is a simple introduction to some of the history and landmarks of Musashino City and how to reach them.

Possibly Japan's most well-known elephant, Hanako was an icon of Inokashira Zoo until her passing in 2016. Funded by donations, the life-size statue of the Thai-born elephant stands proudly outside of Kichijoji Station, drawing any number of visitors looking to recall one of the city's most beloved immigrants.

Direct access from Kichijoji Station on the JR Chuo Line.

A waste management center may not be high on most people's list of things to do but the Musashino Clean Center is a definite standout. More museum than waste center, the building's modern outer wall design recalls the region's natural geography while an interactive interior helps pique the interest.

The World Federal Peace Statue was designed by renowned sculptor Kitamura Seibo, the man who created the Peace Statue in Nagasaki. The statue features a foundation of stones sourced from all around the world. On top of the global base stands a woman exultantly riding a horse in the uniquely human quest for peace among nations.

Direct access from Mitaka Station on the JR Chuo Line.

The Former Anti-Aircraft Gun Positions in Sekimae are a series of public information boards dotted around Musashino Central Park. The Nakajima Aircraft Company once manufactured munitions during World War II here and was successfully targeted and bombed by US forces. The positions now act as a reminder and poignant lesson on the area's tragic 20th century history.

An 8-minute no.13 bus rider from Mitaka Station on the JR Chuo Line.

Find out more about Inokashira Park. 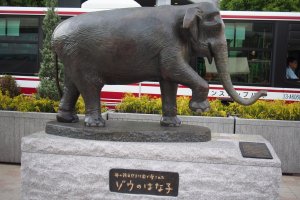 Justin Velgus a month ago
A nice collection worth putting together in a guide. I recently found out the word "jumbo", meaning very large, became popularized since it was the name of a traveling circus elephant!
Reply Show all 1 replies

Sleiman Azizi Author a month ago
That's the plan....
Reply

Kim a month ago
I just looked up the waste management plant and it's not what I expected at all! Very cool design.
Reply Show all 1 replies

Sleiman Azizi Author a month ago
Right? I don't think anyone would have expected such style.
Reply
4 comments in total
Back to Contents