Festivals are usually boisterous, loud and lively events. But at Nakizumo Crying Baby Festival, it may be even more so as shrill cries of babies pierce the air above the commotion.

Each year, eager parents of one-year-old’s dressed in fancy garbs head down to various locations in Japan for the Nakizumo Crying Baby Festival with their child in tow. The festival is a competition between babies where the victorious one is the first to cry. Opposing babies are carried by a sumo each into the dohyo where they would face off with the sumo referee taunting them while the wrestlers jostle them gently to induce tears. If the contestant proves tougher than that, the tengu (a bird demon) mask will be brought out to work the magic. Should contestants burst into tears at the same time, the one who bawls louder and harder would be crowned the winner.

The unusual Nakizumo Crying Baby Festival is done in the name of blessing the baby as “naku ko wa sodatsu” translates to “crying babies grow”, meaning babies who cry would grow up strong and healthy. The festival also serves to drive away evil spirits.

While the biggest event is held at Asakusa’s Sensoji, it also takes place in different spots across Japan.

Though unorthodox, the festival is so popular among parents at Asakusa that they have to secure spots through a lottery system! Only about a hundred lucky babies will get to participate in the event each year. The venue will be filled with people milling about as parents, babies, relatives, fellow Japanese and tourists turn up to observe the event.

Two rounds will be held, the first at 11.10am and the second at 2.20pm, behind the main building of Sensoji. 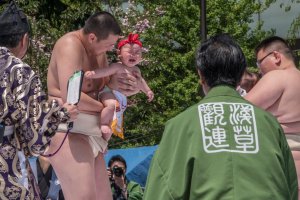 Sherilyn Siy a year ago
What a scream!
Reply Show all 0 replies

Kim 2 years ago
I've heard so much about this festival - definitely sounds like one of the more unique events in Japan!
Reply Show all 0 replies
2 comments in total