New Year's parade based on a legend

Oji Shrine, located 5 minutes' walk from Oji Station, is one of the most important shrines of Tokyo, and is known for its New Year's parade based on an old legend.

According to this folk tale, a group of foxes from the Kanto region gathered under a large tree, dressed as humans and tried to gain access to Oji Inari-Jinja, the Shinto shrine dedicated to the deity of foxes. The well-known tale has been painted by famous ukiyo-e master Utagawa Hiroshige, which helped originally inspired this fox parade that has taken place every New Year's Eve since 1993. 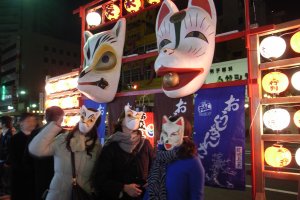 EMIKO MIZUNO 2 weeks ago
I have been to that festival.
It was fantastic and mysterious( ´ー`)
I want to go again when it's revived.
Reply Show all 0 replies

Elena Lisina 4 years ago
Interesting! But cold and dark time of a year! :)
Reply Show all 0 replies

Kim 4 years ago
What a unique way to ring in the new year!
Reply Show all 0 replies
3 comments in total