Senzoku-ike is a relaxing park and pond area located in Northern Ota Ward. Senzoku-Ike is home to several yearly events throughout the season, but one of the best is the Autumn Festival held each year in early September (typically the first Sunday of September).

During this time, tourists can explore Senzoku-Ike pond and shrine and fully experience what activities and events area has to offer.

During the festival small stands are erected where tourists can fill up on foods and sweets including chicken, yakisoba, potatoes, Japanese novelty candies, kebabs and much more.

There are also many stands with games and activities that will delight the children. These stands are a few hundred yen to play and include throwing games, shootings games, fishing games and more with prizes for the winners.

One interesting way to explore the area in Autumn is through a guided tour by the local volunteer group. These guided tours are run by Japanese, multilingual staff (typically English only) and the dates and times of the walking tours will be posted on the website.

During the autumn festival Senzokuhachiman Shrine hosts several musicians and performers throughout the day.These performances include music from traditional bamboo flutes and Japanese drums and the music carries its melody throughout the entire park.

Near the shrine, there is a stage where performances of Edo Sato Kagura occur throughout the day. These Kagura dances depict ancient stories and folktales from Japanese history including heroic battles with demons, dragons, and more. The story is played out through music and dance and the characters put on quite the show with flashy costumes and tricks throughout the performance.

This article originally appeared on the Ota-City.com website and is republished with permission. 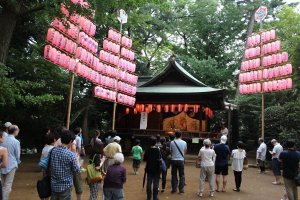