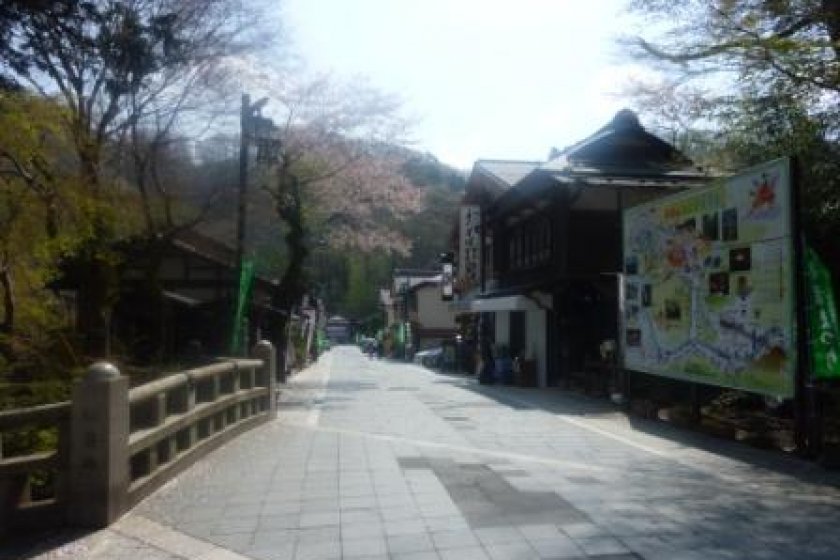 Path from the station to the start of the hiking trail

Takao-san (Mt Takao) is a mountain located out in western Tokyo. It takes just over an hour to get there from Shinjuku.

It is a very popular mountain for Tokyoites, however most people who visit use the cable car to get part of the way up. Those who walk the whole way to the top of Takao are in the minority, and those who continue on further to Jimba-san are even rarer! I was one of these rare people on a lovely sunny day in mid-April.

Once you exit Takaosanguchi station, it is about a five-minute walk along a paved street, lined with traditional Japanese buildings, to the cable car station. If you want to be a ‘real’ hiker, go to the left of this and keep walking. In no time at all you will see a track go off to the left and start climbing. This is the Inariyama trail, which is one of the two tracks to the summit. The other track is the Biwa Waterfall trail. I opted for Biwa on this occasion, but plan on taking Inariyama in the future. I hear that Takao is beautiful in every season, so I plan on returning and trying the Inariyama trail later in the year, perhaps for the autumn foliage.

The Biwa trail climbs steeply in places and winds through the lush forest, passing some lovely streams with mossy rocks along the way. There is also a small waterfall (Biwa Falls) to see, about a third of the way up. There are many information boards showing the various flora and fauna in the area. The day before I climbed Mt Takao it had rained quite a lot, so the track was quite muddy in places. Near the top there was a section where it was almost like walking down a river!

Once you are nearing the summit there are a lot of steps to climb just before you get to the point where the various tracks intersect. It took me a little under an hour to reach this point. From here, it is a short walk to the top. Once you arrive at the summit you are greeted by some souvenir shops and kiosks, as well as the visitors centre. There is a nice lookout area, from where I am told you can see Mt Fuji on a clear winter’s day. Although I couldn’t see Fuji, the view was worth the walk!

From here if you take the trail towards Jimba-san, the people get fewer and fewer. The track climbs up and down numerous times before reaching the high point of the day, Mt Jimba (857m). Along the way there are two peaks, Shiro-yama and Kagenobu-yama, to negotiate. Near Shiroyama there is a lovely grassy hilled area, perfect for a rest stop. While I was doing just this a very friendly Japanese lady approached me and started telling me all about the mountain. She goes there almost every week, and she kindly explained that there are many tracks leading off the mountain at lots of different points, so there are many hiking options. For example, from Shiro-yama it is possible to descend to Sagami Lake, which can been seen in the distance from Shiro-yama and looks like a good option for another day.

Once you arrive at the summit of Jimba-san (approximately 3 hours from the summit of Takao) you are greeted by a large concrete horse ('jimba' means 'battle horse" in Japanese), as well as a kiosk . Again, if the weather is clear it should be possible to see Fuji from here.

The descent leads down some steep stairs to Wada Toge. From here it is about a 4km walk along a narrow vehicle road to Jimba Kogen Shita bus stop, from where there is a bus that takes you to Takao station (Chuo and Keio lines).

My total walk time was approximately 5.5 hours. I am looking forward to returning to Takao-san many times in the future to see it in different seasons and to try out some of the different tracks. It seems to be a hiker's paradise—so close to Tokyo and so many options! 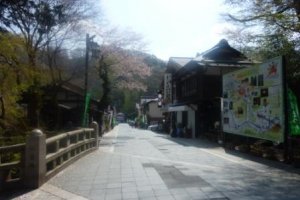 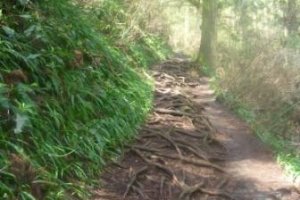 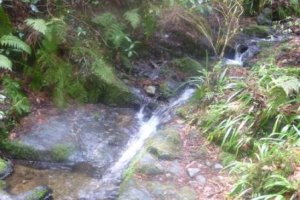 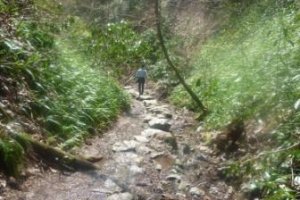 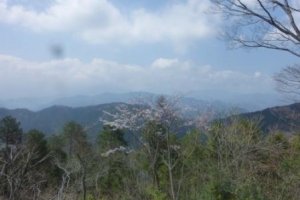 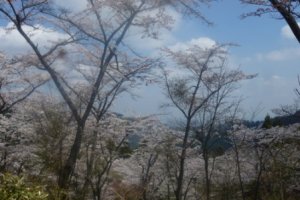