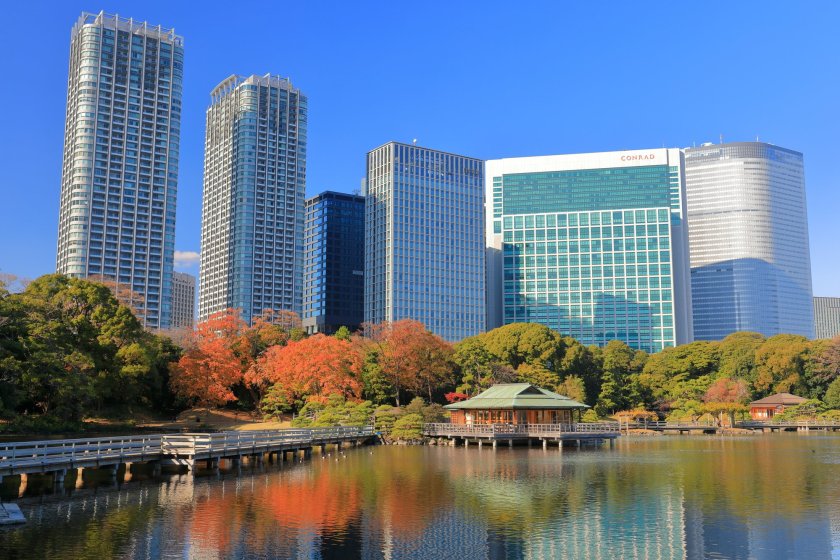 Tokyo: Where the Past and Future Coexist

A combination of modern day wonders and cultural charm

For many, Tokyo conjures visions of expansive skylines, neon lights, and futuristic vibes. Even a quick Google search of the area yields photos of this preconceived notion.

While Tokyo is indeed a bustling hub of the future, its connection to traditional Japan perseveres, creating a unique landscape where the past and future live in harmony. Among Tokyo’s streets, it is not uncommon to find centuries old shrines besides high rise apartment buildings. As you move past the city’s borders, the densely packed buildings give way to the countryside, revealing cherished nature that people have coexisted with for generations.

Follow us on an adventure through Tokyo’s technologically advanced cityscape and centuries old roots to deepen your knowledge of this one of a kind metropolitan prefecture.

Let’s begin our journey in the future with one of Tokyo’s most iconic structures—Tokyo Skytree. This tower, located in Sumida City, was completed in 2012 and is a landmark on the city’s skyline. At 634 meters tall, Tokyo Skytree is the tallest broadcasting tower in Japan and one of the tallest in the world. From its two observation decks, which reach heights of 350 and 450 meters respectively, visitors are treated to surreal panoramic views of the sprawling cityscape. The structure’s state-of-the-art architecture, sleek design, and ever-changing, nightly illuminations perfectly embody the technologically advanced side of Tokyo. At Skytree’s Sky Restaurant 634, the refined menu and glittering skyline below will make you feel as though you are dining in the future.

Before Tokyo Skytree took its place on the skyline, Tokyo Tower reigned as one of Tokyo’s most recognizable landmarks, and today is still very much an icon of the city. Completed in 1958, the broadcasting tower stood as a symbol of Japan’s rebirth after the war and was the country’s tallest structure until the completion of Tokyo Skytree in 2012. Although the 333-meter tower is about half the size of Tokyo Skytree, its observation decks at both 150 and 250 meters still offer stunning views of the surrounding skyline. You can even see Tokyo Skytree and Mount Fuji on clear days! Apart from its observation decks, the tower and surrounding area feature a number of restaurants, cafes, and souvenir shops. While far from being the oldest structure in Japan, Tokyo Tower’s Eiffel Tower-esque architecture and over 60-year reputation still elicit a sense of nostalgia for the recent past.

Miraikan – The National Museum of Emerging Science and Innovation

The National Museum of Emerging Science and Innovation’s name speaks for itself. Called “Miraikan,” this museum is located in the high-tech entertainment district of Odaiba and takes visitors on an educational journey through Japan’s cutting-edge technology and future innovations. The exterior's wide windows and sleek steel construction perfectly encapsulate the futuristic exhibits inside. Miraikan is home to a wide array of exhibits and covers topics ranging from Space and Earth to Life and Robotics. One of the museum’s most eye-catching features is its massive recreation of planet Earth. Observable from different floors, this spherical symbol exhibit consists of 10,362 of the latest LED panels and illustrates an ever-changing and realistic vision of our planet. With its modernistic designs and mesmerizing exhibits, Miraikan reminds us of the great scientific leaps humankind has made.

In contrast to Miraikan’s focus on the future, Koganei City’s Edo-Tokyo Open Air Architectural Museum transports visitors to Japan’s past with its collection of Edo to Showa period buildings. In 1993, the Tokyo Metropolitan Government established the 7-hectare museum to relocate, reconstruct, preserve, and exhibit historical buildings. The buildings are grouped into three zones—west, center, and east—and exhibit people’s lifestyles from these past eras. As you stroll through rustic farmhouses, Japanese-styled gardens, and nostalgic shops, you can feel the shadows of the past walking alongside you. You can even enjoy cafe sweets at the House of Georg de Lalande, a charming Western-style home built in the 1900s. Many of the architectural elements exhibited in the museum’s structures can still be seen in Tokyo today, illustrating the special connection the area still has to the past.

After enjoying the sights at Edo-Tokyo Open Air Architectural Museum, take your exploration of the past one step further by staying at Kabuto-ya Ryokan. Located in Hinohara, this 300-year old gassho-zukuri (traditional house with a steep thatched roof) epitomizes the past with its immaculately preserved architecture and traditional Japanese hospitality. The inn, which is surrounded by western Tokyo’s lush nature, is home to Japanese-styled guest rooms that feature tatami floors, shoji, wooden detailing, and minimalist white walls. Some rooms even include an irori, or sunken hearth, for meal times. If you opt for an accommodation plan with meals, you can enjoy charcoal-grilled yamame (cherry salmon), beef, chicken, and vegetables over the irori, which are paired with side dishes of edible wild plants. As you sit around the hearth, encircled by the enticing smells of grilled food, it is easy to imagine that you are dining in the past. Later after a nice bath, you can don a yukata provided by the ryokan and truly lose yourself in the charming vibes of traditional Japan.

Let’s head back to the future with a trip to Roppongi Hills Observation Deck. Roppongi Hills, often referred to as a “city within a city,” is a massive complex of offices, apartments, shops, restaurants, a hotel, and an art museum. Within this conglomeration of condensed city life stands Roppongi Hills Observation Deck—one of Tokyo’s best observation spots. The facility features an indoor observation deck, called Tokyo City View, at 250 meters above sea level and an open air one at 270 meters above sea level. The latter one, called Sky Deck, offers truly unobstructed views of the cityscape where you can see Tokyo SkyTree and Tokyo Tower simultaneously in an open air setting. The Sky Deck also regularly hosts city observation and astronomy related events sponsored by the Roppongi Tenmon Club, making it a space where you can witness views of Tokyo and beyond. At Tokyo City View, you can enjoy events and exhibitions in tandem with the sprawling views.

From above, Tokyo seems like a city straight out of the future. However, if you dive deeper into its narrow alleys and hidden nooks, you will discover an area rich in traditional character. Nonbei Yokocho, located beside Shibuya Station, is a drinking street that illustrates this local charm. With roots in the 1950s, this alleyway is packed with retro izakaya (bars), yakitori (grilled chicken) shops, and restaurants and has become a go-to place for after-work drinks among locals. Once the sun sets, soft lantern light bathes the area in an aesthetic glow and energetic chatter spills out of the cozy bars. Enjoy beer, sake, shochu, or sours with resident patrons and fill your stomach with small dishes of sashimi, grilled meats, vegetables, and more. After a few drinks, Nonbei Yokocho’s alluring atmosphere will make you feel as though you traveled back to the Showa Period. Please note that Nonbei Yokocho is a treasured spot among residents and not a typical tourist destination. When you visit, please come in small groups and follow Japanese-style manners.

Located in Koto City, teamLab Planets TOKYO is a unique museum that transcends convention and immerses guests in interactive exhibits that blur the boundaries between art and people. Perfect for unique photo opportunities, the museum’s artworks use digital technology, color, light, sound, and smell to create all encompassing experiences. Wade through water with projections of koi, walk through a sparkling room filled with infinite lights, and sit among over thirteen thousand live orchids. The massive artwork spaces transport you to surreal and futuristic worlds where the norm is anything but ordinary.

While teamlab Planets TOKYO attracts visitors with its state-of-the-art displays, Ryogoku Kokugikan draws people in with its enduring traditions of the past. This centuries-old sport originated as a Shinto ritual and today, is still widely popular among Japanese audiences. Ryogoku Kokugikan was constructed in 1985 and presently hosts three of Japan’s six yearly sumo tournaments. During sumo tournament season, the over 10,000-seat stadium is packed with cheering fans eagerly watching the intense sport. Aside from sumo matches, the arena is also home to the Sumo Museum, which exhibits artifacts and art related to the history of sumo wrestling. Ryogoku Kokugikan’s popularity stands as a testament to sumo and demonstrates its continued importance in modern Tokyo.

While Japan’s millenia-old history is impressive, none of its structures or ideologies can compare to the longevity of nature itself. Nippara Limestone Cave, located in the nature-blessed town of Okutama, is one of the largest caves in the Kanto region and a popular tourist attraction. The cave’s rocky walls and centuries-old stalagmites act as gateways to the past where visitors can immerse themselves in an ancient environment. Throughout the year, the cave consistently stays 11 degrees Celsius, making it a cool getaway in summer and a comfortable excursion during wintertime. For a modern touch, the cave is illuminated in a rainbow of colors—highlighting the jagged texture of the walls and reminding visitors of the everlasting beauty of nature. 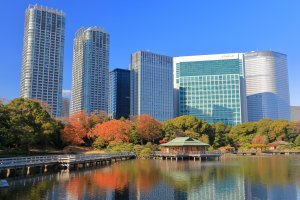 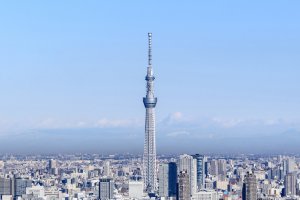 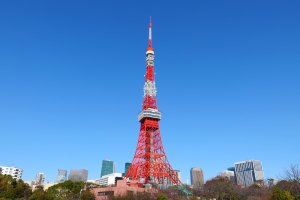 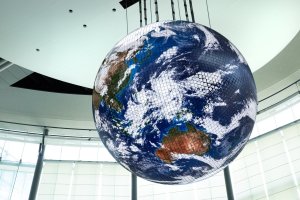 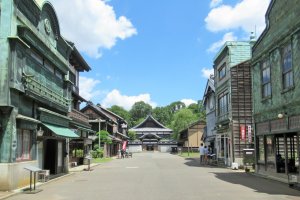 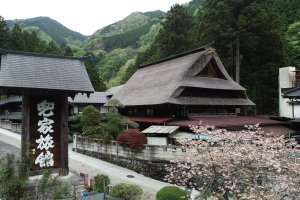