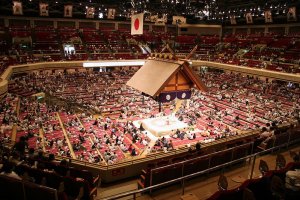 Tokyo's Primary Sumo Hall" "Ryogoku Kokugikan" "was completed in 1985 and has seating for over 10,000 spectators and hosts sumo tournaments three times a year (January, May, September), as well as others Used in events such as wrestling, boxing and concerts.

The hall can also be visited when there are no sporting events. The hanging roof that spans the ring is spectacular. You can also learn more about the history and culture of this ancient sport in the on-site sumo museum.

Ryogoku, the part of Tokyo where Sumo Stadium is located, is the center of the sumo world. Many of the sumo stables where the sumo wrestlers live and train together are located in this area. There are also many Chanko restaurants here. Chanko Nabe is a stew that is enriched with all kinds of vegetables and proteins and is very popular with sumo wrestlers.

Discover Japan's national sport at the Ryogoku Kokugikan in Tokyo. Soak up the atmosphere as the world's top sumo wrestlers..

Clash of the Titans, Tokyo-style

Sumo wrestling is perhaps one of the most intriguing aspects of Japanese life for the foreign visitor.

Kokugikan Arena will host boxing at the 2020 Olympic Games. Capacity at the arena for the bouts is 7300 spectators. Along with the..

Guide to Sumo at the Kokugikan

Maximize your enjoyment of your visit to the sumo in Tokyo's Ryogoku area, and discover what goes on inside the Kokugikan.

Ryogoku Nigiwai Festival is a great community event held in spring with lots of sumos, chankonabe and performers to see.

Three times a year, Japan's national sport takes the spotlight in the capital, during the Sumo Grand Tournament at the Ryogoku..

An exhibition on retired yokozuna Kisenosato will be held until mid-June at the Sumo Museum in Ryogoku Kokugikan in Tokyo.

Held in Ryogoku in central Tokyo, the first sumo tournament of each year is keenly anticipated. This year's featured many surprises,..

The Sumo Museum is in a small enclave of Ryogoku Kokugikan stadium, is open year-round, and has free admission.

Professional sumo's third tournament of the year is held in Tokyo at the Ryogoku Kokugikan from mid-to-late May.

The Power of Sumo

The national sport of Japan, Sumo is both sport and ancient tradition. Brief, intense bouts are embellished with captivating rituals...

The Edo Tokyo Museum is a historical museum in Tokyo in the Ryogoku district. The museum was opened in March 1993 to preserve the cultural heritage of..