Sumo wrestling: a sport born out of tradition 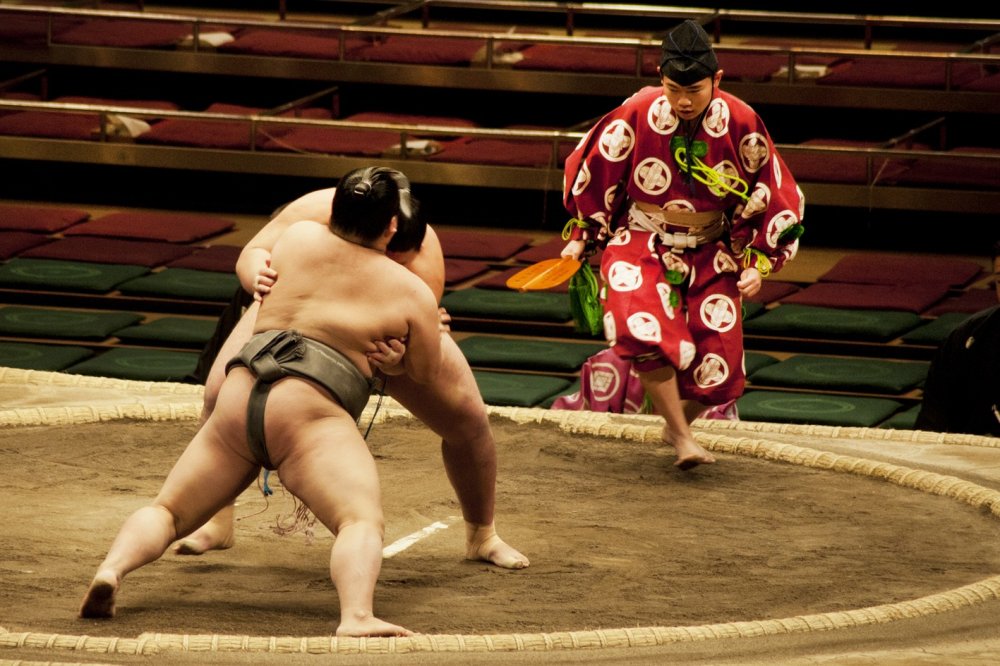 In their traditional costumes, the judges move quickly to monitor the action 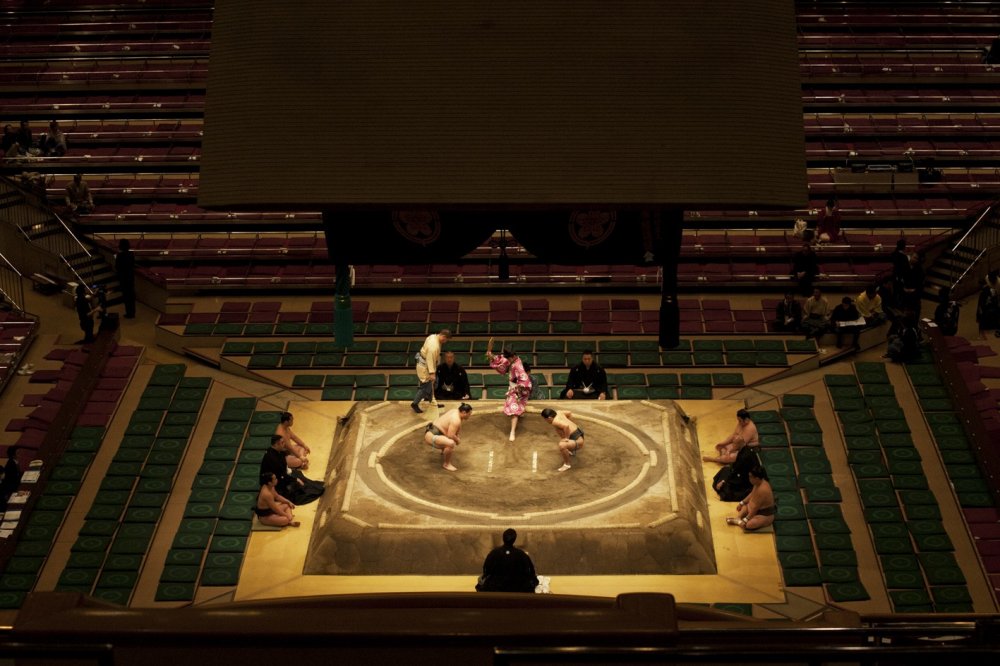 For the Juryo (intermediate division) bouts in the morning, there are few spectators 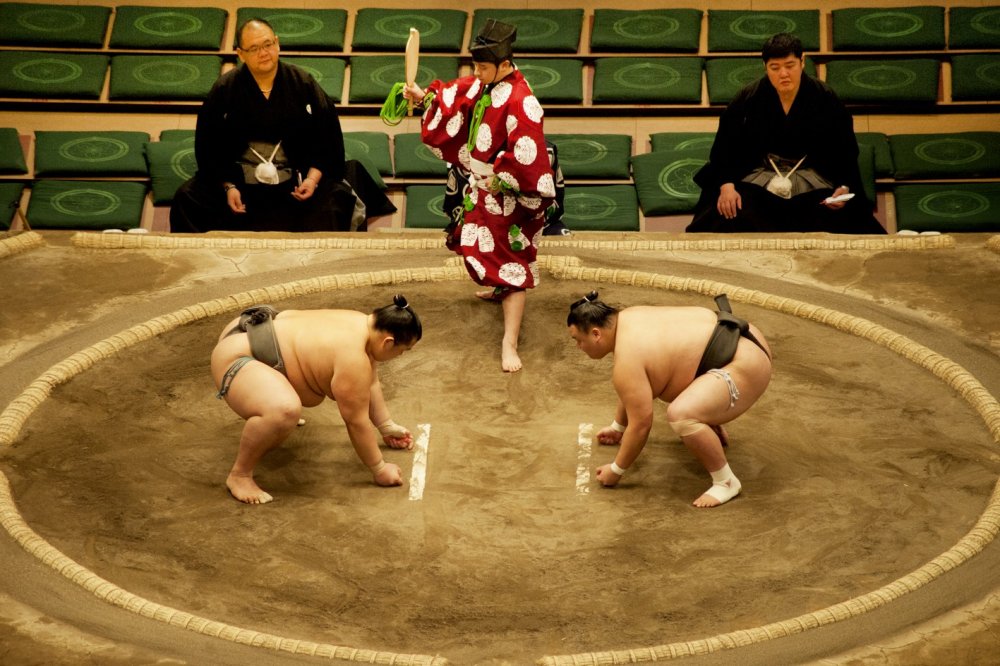 The dohyo is 18 feet square and 2 feet high 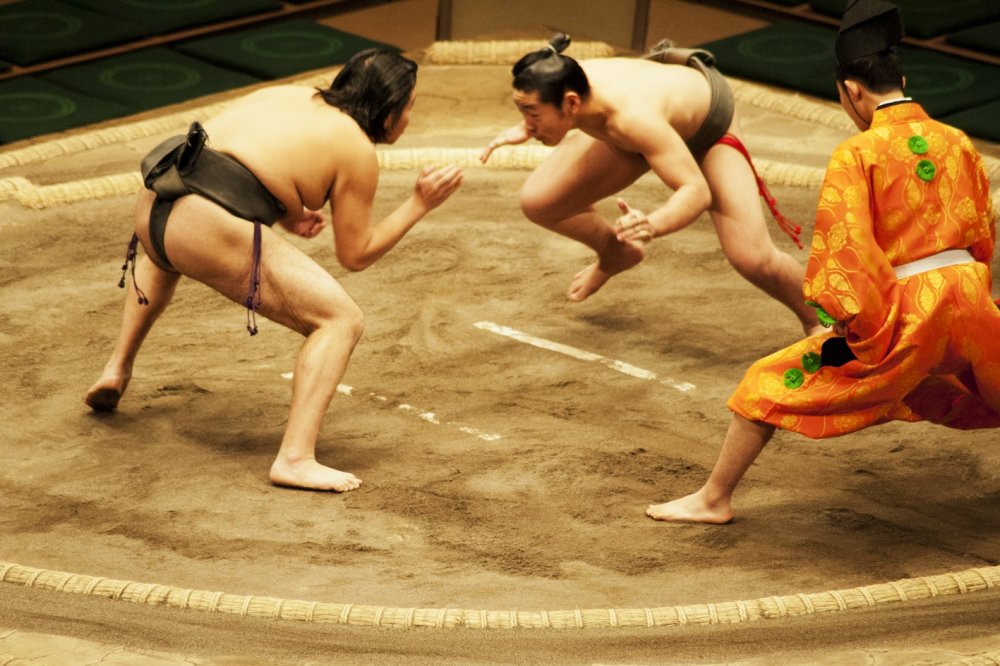 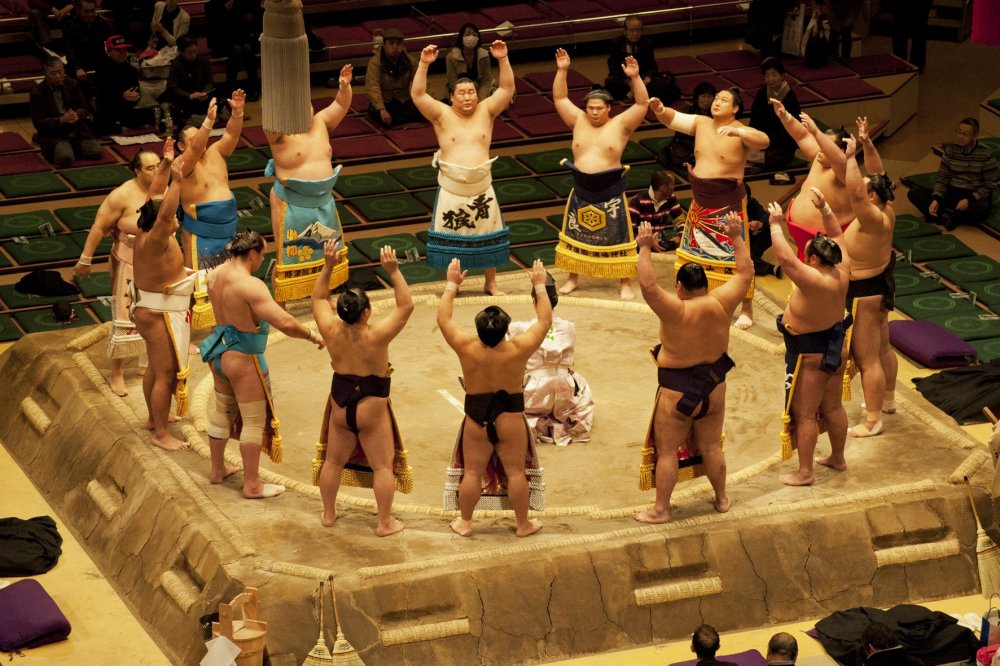 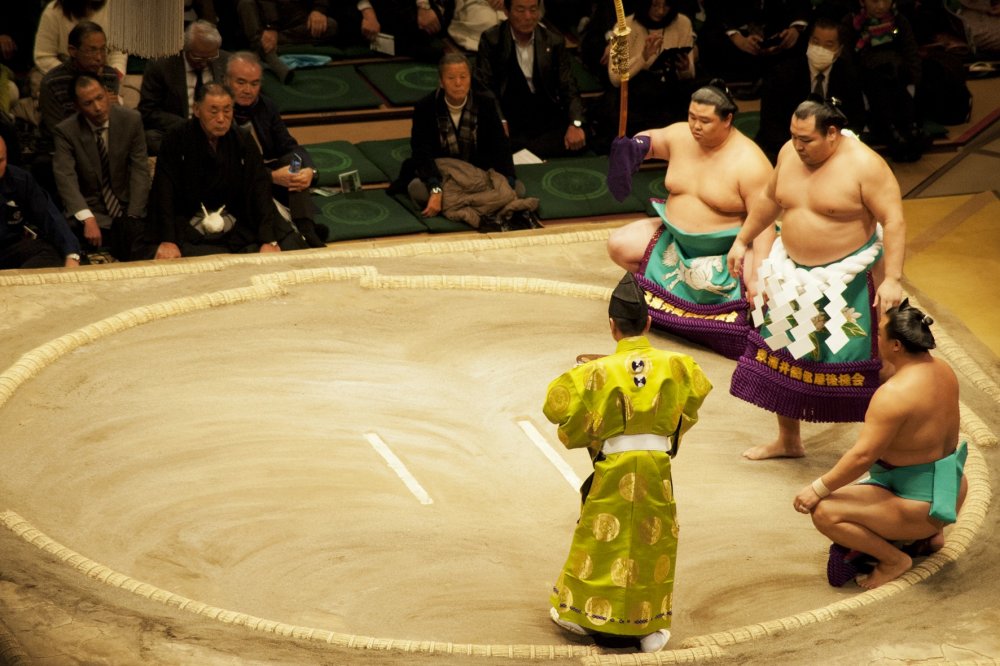 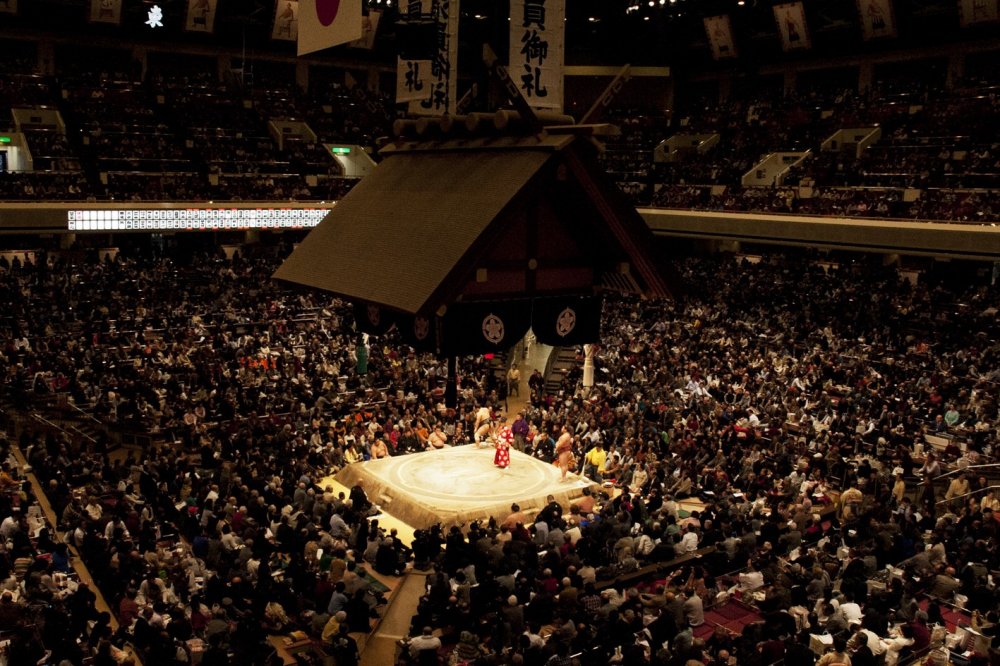 During the Makuuchi (senior division) bouts, the arena is full 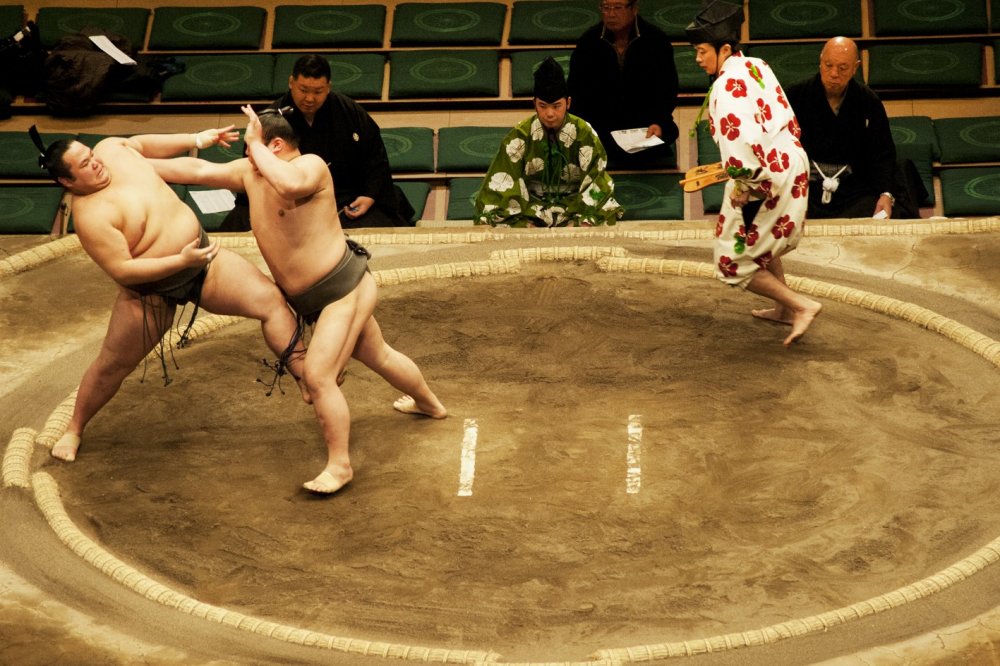 The loser is the wrestler who falls in the dohyo, falls out of the circle, or touches the ground with any part of the body other than his feet 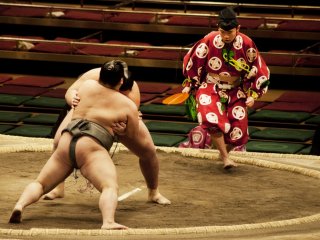 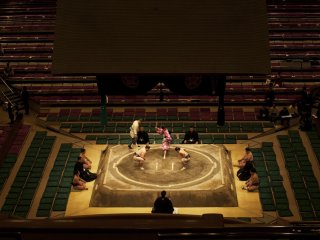 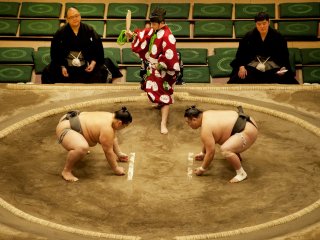 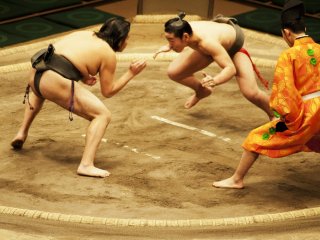 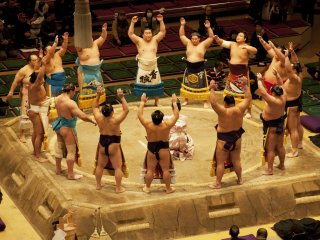 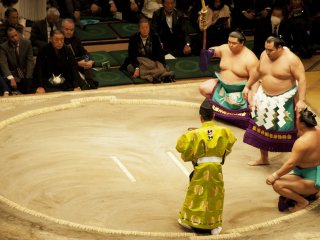 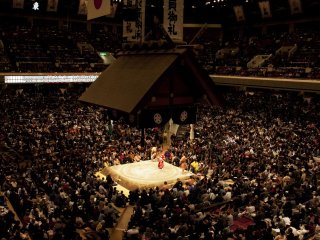 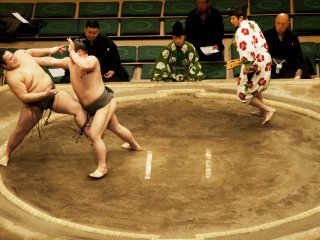 Of the six Grand Sumo Tournaments held every year in Japan, three take place at Ryogoku Kokugikan in Tokyo, so if you are planning a trip to Japan, check the calendar and do not miss this event. I was able to attend a day of the January tournament: the advanced tickets were sold out, so I went by purchasing a general admission ticket, at a cost of ¥2200. Despite being far away from the ring, the seats reserved for general admission give a very good view.

Sumo has its roots many years ago: in fact, a Japanese legend says that the origin of the Japanese race depended on the outcome of a sumo match. In its 1500 years, sumo has retained intact the etiquette and rituals that characterize it. The ring is called the dohyo and it is revered as a sacred space: before each bout the wrestlers throw salt down, to purify the space and drive away any malicious spirits. Suspended from the ceiling over the dohyo is a roof resembling that of a shinto shrine, with four giant tassels hanging from the corners to signify the seasons of the year.

A Sumo wrestler wins the bout by forcing his opponent out of the ring or throwing him in the dohyo. On the last day of the tournament, the winner is awarded the Emperor's Cup.

Geraldine Buergel 2 years ago
Wow, 2200 yen is not even that expensive. I'd love to go if I get the chance!
Reply Show all 0 replies

Bronwyn O'Neill 4 years ago
Great photos! I'd love to see sumo one day...
Reply Show all 0 replies
2 comments in total

Geraldine Buergel 2 years ago
Wow, 2200 yen is not even that expensive. I'd love to go if I get the chance!
Reply Show all 0 replies

Bronwyn O'Neill 4 years ago
Great photos! I'd love to see sumo one day...
Reply Show all 0 replies
2 comments in total