The year's first tournament in Tokyo

The thrill of two mountains of thunderous flesh crashing into each other is a spectacle that is drawing more and more fans to sumo each year. Sold out arenas are now the norm and the opening tournament of the year is hotly anticipated by all.

This year's opening tournament was full to the brim of surprises, none more shocking than the retirement of grand champion Kisenosato. Dogged with injuries ever since being promoted to the exalted yokuzuna rank, Kisenosato drew the curtain on his sumo career on the fourth day, after losing his first three bouts.

After ten straight victories, Hakuho, perhaps the greatest sumo wrestler of all time, was on track to claim a record 42nd tournament victory. And then he lost. And again. And then one more time. After having suffered two injuries early in the tournament, the champion was finally forced to withdraw. The only other yokuzuna, fellow Mongolian Kakuryu, also pulled out through injury.

This left the tournament open to the top ozeki wrestlers who were, to put it mildly, struggling. Georgian Tochinoshin withdrew early due to injury, while Takayasu and Goeido struggled wildly to get their tournaments back on track, with an eventual winning record of nine victories and six losses. Takakeisho, winner of the final tournament of 2018, fought well, but was pipped in the end by Mongolian Tamawashi.

Known as the Iron Man due to his resilience and never having missed a bout in his professional career since 2008, Tamawashi secured here his first ever tournament win. Most special was that this tournament featured the Emperor and his wife, the last time these two will ever appear at a sumo tournament in their royal capacity before their abdication later this year.

With the Osaka tournament looming in March, the stakes have now been raised, as new champions surge and veterans feel the strain of time and tired bodies. 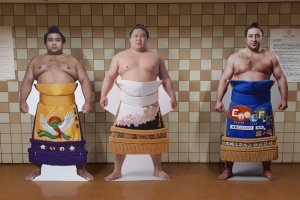 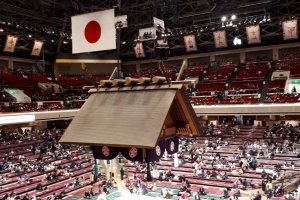 Elizabeth S 3 years ago
I was skeptical about sumo before I went to Ryogoku for the Sumo Basho. Would I enjoy it? I got into the gripping action, and the atmosphere is fascinating. I watched the audience as much as the sumo, and chatted with people who filled me in on the strategies and the traditions. It’s a lot of fun.
Reply Show all 1 replies

Sleiman Azizi Author 3 years ago
I've fallen for it. It's great. My son and I are into it and are looking forward to watching the upcoming tournament in Osaka.
Reply

Kim 3 years ago
Those cardboard cutouts are awesome!
Reply Show all 3 replies

Bonson Lam 3 years ago
They fooled me! Great opening line to your article as well.
Reply

Sleiman Azizi Author 3 years ago
Thanks!
Reply
6 comments in total