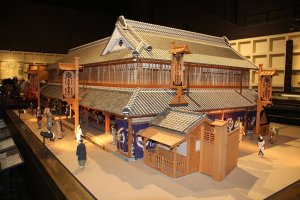 The Edo-Tokyo Museum is a historical museum in Tokyo in the Ryogoku district. The museum was opened in March 1993 to preserve the cultural heritage of Edo. The museum's permanent exhibition illustrates the past of Tokyo (known as Edo until 1869) and covers many features of the capital from the Edo period to the relatively recent decades. In addition to the permanent exhibition, there are regular special exhibitions that deal with Tokyo-related topics.

In an interactive way, visitors can discover different aspects of the former Tokyo, such as the way of life of the people, the architecture of the Edo period, the cultural heritage, the political climate, the economic situation and much more. Numerous city models, figurines, and life-size figures are used to illustrate the history of Japan during the Edo period.

Lose yourself for a few hours while you discover life in Edo through beautiful scale models and interesting artefacts.

The Edo Tokyo Museum, using both historical artifacts and hands-on exhibits, guides and educates visitors through the transition..

The Edo-Tokyo​ Museum brings the history of Japan's modern capital to life.

Curious to see what life was like when samurai roamed the streets of Tokyo? Take a trip to the Edo-Tokyo Museum.

Delighting in the Dioramas of the Edo-Tokyo Museum

In the Edo-Tokyo Museum you can learn a lot about history of the city using audio-guides. There are many interactive options that..

A special exhibition taking place at the Edo-Tokyo Museum is titled "Ancient Egypt - The Creation of the World". The event will..

Excavations in the Japanese Archipelago

Around 9000 archaeological excavations are completed across Japan each year, but opportunities for the public to explore their results..

Tokyo's Primary Sumo Hall" "Ryogoku Kokugikan" "was completed in 1985 and has seating for over 10,000 spectators and hosts sumo tournaments three..