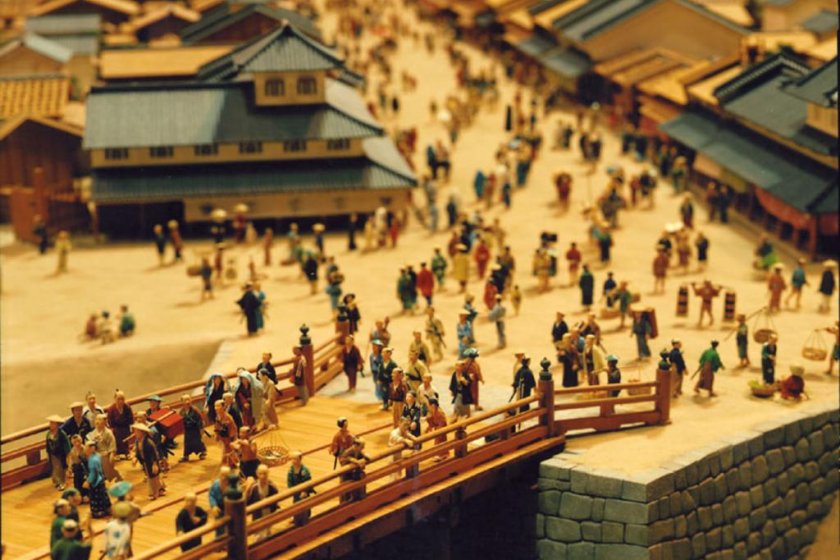 Your journey from past to present

A daunting three-story escalator whisks you away from modern-day Tokyo and plants you face-to-face with the historic Nihon-Bashi, which serves as “Kilometer Zero” for Japan (the point from which highway distance signs are measured). Your time travel back to old Edo is complete with the trek across this impressive full-scale replica of the original wooden bridge completed in 1608. With more than 2,000 daily visitors, the Tokyo Metropolitan Edo Tokyo Museum using both historical artifacts and hands-on exhibits, guides and educates visitors through the transition of Edo to Tokyo.

Your journey begins with a lesson in the establishment of Edo. Though it is hard to believe, much of Edo (now Tokyo), is situated on reclaimed land. The very name Edo (江戸) portrays this, with “wetland” 江 and “entrance” 戸 combining to describe the pre-industrial-era landscape. Visitors can experience this visually via an interactive map which illustrates the expansion of the city over time. In the vicinity of the map lies an elaborate diorama of life in early Edo which truly captures the essence of life through figures captured in various movements from bathing to even pick-pocketing.

As you walk through the Edo section, there are numerous hands-on exhibits to ensure your visit to be a memorable one. An old-style fire fighter, aristocrat, and daimyo are just some of the characters you can become by hoisting a firefighting unit standard or riding in an aristocrat’s and daimyo’s carriages. The museum also illustrates the step-by-step process of creating an ukiyo-e block print, the dominant art form of the time.

Progressing further into the museum brings you closer to what we know as modern day Tokyo. Replicas of the very first sky scrapers and commercially available cars are just a few of the exhibits featured. You can even ride a rickshaw and the first bicycle model to be mass-produced in Japan.

It is interesting to note that while many of the latter exhibits are of foreign origin, the craftsman ship and distinctly Japanese style present from the earliest exhibits of the museum are kept alive in various ways. Using this strategy, the museum cleverly guides you through the ages while reminding you that the spirits of Edo and Japanese people of old are still alive even in modern times, helping you understand how Edo made the unbelievable transition to what we now know as the Tokyo metropolis. In this way, the Edo Tokyo museum is truly remarkable and surely worth a visit if you ever find yourself in Tokyo.

Note: With its plethora of exhibits, it is advisable to take advantage of the complimentary volunteer guides who can take you through the museum and offer an insider’s knowledge of the exhibits. These guides command numerous languages, ranging from Chinese, French and of course, English. Due to their popularity, it is advisable to go as early as time permits and request a guide at the 6th-floor volunteer desk. There are also audio guides available for rental.

In the western Tokyo area, it is also well worth visiting the sister Edo Tokyo Open Air Architectural Museum.

Find out more about Edo-Tokyo Museum. 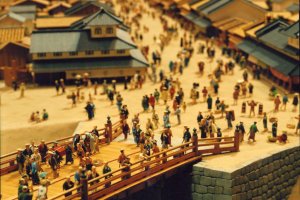 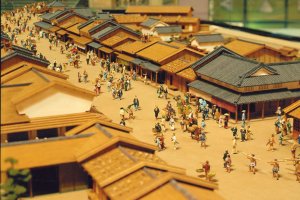 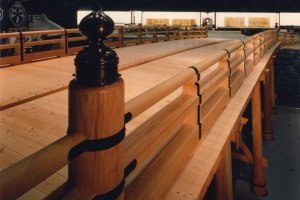 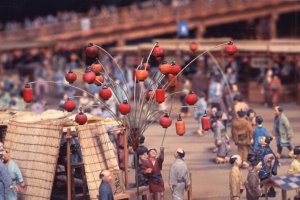 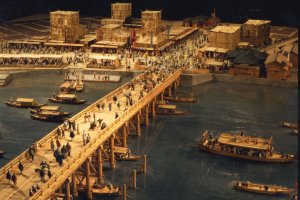 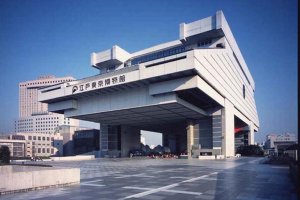 Edo Tokyo Museum will be temporarily closed for renovation, effective April 1, 2022, and last until sometime in 2025 or early 2026.

Elena Lisina 2 years ago
It looks and sounds very interesting, indeed. Thanks!
Reply Show all 0 replies

Tony Mariani 9 years ago
I would recommend visiting this museum. I think it is overlooked somewhat. It takes you through the Edo period up to present day modern Japan. At the end it has a display of what Japan experienced during WWII. I was with a Japanese gentleman at the time who lived through that tragic period. I will never forget the look on his face when we entered the exhibit. It brought back livid memories to him (as he lived through that). My heart went out to him and those who suffered from the effects of war. Still, not a sad place, just very Japanese in how it is presented to the visitor. Walking through what Edo Tokyo looked at the time is worth the visit itself. I still remember this place to this day, 18 years later.
Reply Show all 0 replies

Kevin John Hutt 9 years ago
It really is an interesting place to go.
Even just to see the outside of the museum building is worth it.
Reply Show all 0 replies
3 comments in total