Cherry blossoms on the site of the former Tottori Castle

Kyusho Park sits on the site of what was once Tottori Castle, and these days it's home to around 400 cherry trees in several different varieties. It's one of the prefecture's most popular destinations to soak up the spring season, and for good reason - the park was named one of Japan's Top 100 cherry blossom viewing spots back in 1990.

If you want to make a full day out of your visit to the park in sakura season, be sure to check out the historic Jinpukaku (desginated as a National Important Cultural Property) and the Tottori Prefectural Museum, which has a range of exhibits about the nature, history, folklore, and art of this region of Japan.

Typically, the best time to catch the trees in full bloom here is from late March through to early April.

Kyusho Park can be accessed either on foot or by bus from the JR Tottori Station. On foot it takes around 30 minutes, but if you'd prefer not to walk, take the 100 yen Kururi loop bus (make sure it's the green route). Stop number 12 is the closest to the park. 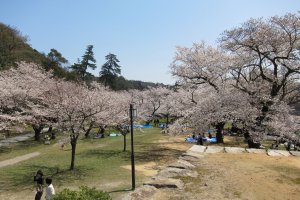