Lacquerware has been popular in Japan over the centuries. It is difficult to image a traditional Japanese table arrangements without a piece of lacquerware somewhere. There are the miso soup bowls, chopsticks, containers for rice, trays, lunch boxes, to name just a few lacquerware items.

There are over ten centers of traditional lacquerware production throughout Japan, and Kishu is one of them. Kishu is the name of a province in feudal Japan. The area corresponds to nowadays Wakayama Prefecture and southern Mie Prefecture. Shikki means lacquered container in Japanese.

The center of Kishu Lacquerware, or Kishu Shikki, is now Kuroe Town, part of Kainan City in Wakayama Prefecture. Currently it is one of the four largest producers of lacquerware items in Japan.

Traditionally all Kishu lacquerware was made of wood but nowadays they are also made of plastic. In case of wood, cypress, camphor and horse chestnut are used. In case of plastic, resin is used. Until the 1950s wood was used as base but due to increasing costs for wood, a change to plastic took place. The wooden items are hand-carved while the plastic items now are pressed in factories.

The Kishu manufacturing process of lacquerware items has four steps: first to create the basic item made of wood or plastic. Second, the application of a foundation. Next comes the painting of several layers of coating. Finally, there is decoration process of the lacquerware items. Decorations can be based on drawings (makie) or carvings (chinkin) with inlays of sea shells, pearl, gold and silver foil etc.

The coating is of highest importance as it makes lacquerware out of an otherwise wooden or plastic item. Japanese lacquer is made from the sap of the urushi tree. Lacquer sap is also called urushi. Painting on the lacquer coatings is called nuru in Japanese. This is why lacquerware is also referred to as nurumono, or short nuri, elsewhere but in Wakayama the lacquerware items are called Kishu shikki.

The area’s history in woodwork reaches back about 600 years to the Muromachi Period (1336 to 1573) of Japanese history. This period started when the Ashikaga clan established a Shogunate (military rule) and it ended when famous Japanese war lord Oda Nobunaga drove the Ashikaga out of Muromachi (part of Kyoto) and out of power. During this time woodworkers began to settle in the Kishu area. They carved wooden bowls made from cypress, which is in plentiful supply in this area.

Another influx of woodworkers and lacquerware craftsmen took place at the end of the 16th century. They came from nearby Izumi Province where they were employed to decorate Negoro-ji temple. The temple was burned down by warlord Toyotomi Hideyoshi in 1585. These craftsmen were called Negoro-nuri craftsmen.

With the establishment of the Tokugawa Shogunate (1603 to 1868), the area flourished in the neighborhood of Wakayama, a castle town governed by a branch of the Tokugawa family at the time. Trade and crafts supplying the castle town prospered. This gave Kishu woodcraft a boost. More decorative containers and items were needed by nobility, rich merchants and rich farmers. Craftsmen began to apply urushi coatings to wooden items, and Kishu shikki was born.

The fact that Kuroe is situated on the Kumano Kodo and on the Kishu Kaido facilitated the spread of Kishu shikki. Its proximity to the ocean allowed for transport of lacquerware on large vessels to Edo, the capital of Japan during the feudal period.

There were still 500 families employed in the Kishu Shikki industry in the 1970s but since the 1980s there has been a constant decline. Currently there are about 50 workshops/factories producing Kishu Shikki. They are mainly family businesses. The Kishu Lacquerware Cooperative counts about 130 members. The cooperative was set up in 1947 to organize Kishu lacquerware promotion, and this is what they are still doing today!

Kishu’s lacquerware craftsmen and sellers welcome visitors to Kuroe. They are keen to show you the variety and beauty of Kishu Shikki. 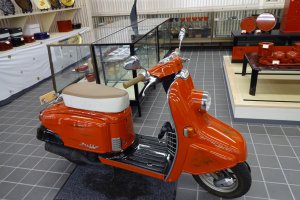 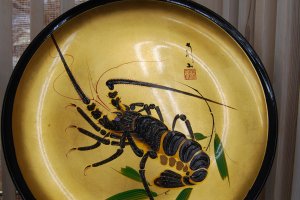 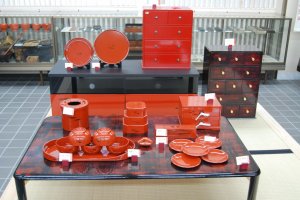 Alena Eckelmann Author 5 years ago
In Wajima, Noto Peninsula, I even saw a toilet cover coated in lacquerware!
Reply Show all 0 replies

Justin Velgus 5 years ago
I was surprised to see the motor bike coated in lacquerware!
Reply Show all 0 replies
2 comments in total