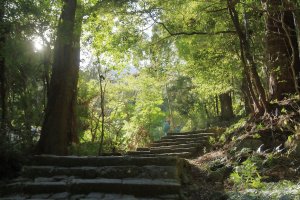 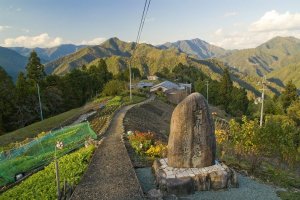 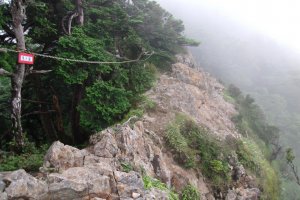 For over 1,000 years, Japanese people from all walks of life, including retired emperors and aristocrats, have made the arduous pilgrimage of Wakayama. The Kumano Kodo is a network of ancient pilgrimage routes that traverse the Kii Peninsula in southern Wakayama Prefecture. These sacred paths have become Created to serve as pilgrimage routes to enter the sacred Kumano Sanzan area, which includes the three great shrines of Kumano Hongū Taisha, Kumano Nachi Taisha and Kumano Hayatama Taisha. In July 2004, the Kumano Kodo Pilgrimage Routes were established as part of the "Sacred Sites and Pilgrimage Routes in the Kii Mountain Range" added to the list of UNESCO World Heritage Sites.

There are 4 main routes in total: The Nakahechi Route is the most popular route. From the 10th century onwards, the Nakahechi route was used extensively by the imperial family on pilgrimages from Kyoto. The Kohechi route connects the Buddhist temple complex of Koyasan and Kumano-Sanzan. Hikers should be well prepared if they want to take this route. The Ohechi Route offers picturesque views over the Pacific, while the Iseji Route features a variety of mountain passes, bamboo forests, terraced rice fields and beaches.

Takijiri-oji shrine marks the beginning of the Nakahechi trail, one of several old pilgrimage trails that crisscross the Kii Peninsula. Takijiri-oji is considered to be the point where “the passage into the precincts of the sacred mountains begins.”

The Ohechi Route (大辺路) follows the 92 km southern coast trail around the Kii peninsula, from Tanabe to the west, around to Nachi Taisha.

The Kohechi Route (小辺路) is a 64 km trail connecting the Kumano Sanzan area to the Buddhist mountaintop temple complex of Koyasan to the north. Following rugged mountainous terrain, it is considered one of the most strenuous routes. This joins up with another sacred route, the 24 km Koyasan Choishimichi route which originates at Jison-in temple at the foot of Mount Koya, in the Kudoyama area of Wakayama.

Hike the ancient path of the gods, following the 170 km Iseji Route (伊勢路) which connects Kumano Sanzan to Japan's most sacred shrine of Ise to the east in Mie prefecture.

One of the three main Kumano Sankeimichi (熊野参詣道), the Kiji Route travels along the western coast of Wakayama (originating as far as Osaka/Kyoto), before splitting into two routes, the inland Nakahechi Route and the coastal Ohechi Route.

For over 1,000 years Kumano has attracted Japanese worshippers and seekers, and old trails, more or less intact, cross-cross Wakayama's..

The Way of St. James and the Hongu Taisha in Japan are both over 1,000 years old. The paths lead to a shrine in Wakayama Prefecture's..

Chikatsuyu-oji is a small village located in a mountain basin about halfway between Takijiri-oji and the Hongu Taisha. Soak your..

Kumano Kodo: From Takijiri to Takahara

If the 5 heritage listed sites, spiritual significance and scenery of the Kumano Kodo Pilgrimage interest you but you do not have..

The rich history of Kumano Kodo and its vital position as a religious hub is clearly described in this information center.

A Pilgrimage on the Imperial Route

Hiking on the Kumano Kodo

Walking the Kumano Kodo is a great way to experience rural Japan and to enjoy its stunning nature. The hiking from Yunomine Onsen..

The Magose-Toge Pass is known for its beautiful stone path which has been maintained for multiple centuries.

At the Hatenashi pass, the mountain of the same name meets the Kohechi path, literaly, the "little path". Located 1,070 meters of..

Kumano Kodo is the only pilgrimage route, along with Spain's Camino de Santiago, that is as a World Heritage Site. It extends..

Living in a village near Hongu on the the Kumano Kodo trail, I have watched my neighbors pick tea leaves from the tea bushes located..

Did you know that the Green Pheasant is Japan's National Bird? This pheasant is endemic to Japan and one can still see it roaming..

Terraced rice paddies have become a rare sight in Japan now but Maruyama Senmaida near Kumano City in Mie Prefecture is still ..

The Magose-toge Pass is part of the Kumano Kodo in Owase City, Mie Prefecture and consists of 6 roads. As a part of the Sacred Sites..

Ise-ji Road of the Kumano Kodo

The “Kumano Kodo” pilgrimage road, located in Owase city, Mie prefecture, had been used by many people since the Edo Period. T..

Hyakkenzan Gorge, a deep valley in the south of the Kii Peninsula, has your ideal summer hiking course. Why? It is a short trail..

The largest coral colony in the northernmost part of the world is found in the ocean off the southern tip of the Kii Peninsula!..

The Kishu Ishigami Tanabe Ume Orchards near Tanabe City in the south of Wakayama Prefecture have more than 300,000 ume trees. The..

The Tanabe area has the most ume (Japanese plum) orchards in Japan. Many farmers and companies here produce ume foods, such as umeboshi..

Why not review more places in Wakayama?

Temple Camp or Temple Hotel, staying at Daitai-ji temple in Kumano, Wakayama, you can enjoy sauna and Zen near the famous Nachi..

You can have outdoor adventures at Daitai-ji temple in Kumano, near the Nachi Falls. Combine camping at the temple with Zen meditation...

The Kumano Nachi Taisha is a Shinto shrine and part of the UNESCO World Heritage-listed holy sites and pilgrimage routes in the Kii Mountains of Japan...

Nachi Waterfall (那智滝, Nachi no Taki) in Nachikatsuura, Wakayama Prefecture, is one of the most famous waterfalls in Japan. With a drop of 133 met..

Kamikura Shrine (神倉神社, Kamikura Jinja) is related to the Hayatama Taisha Shrine and can be found on top of a hill of 538 stone steps, some as st..