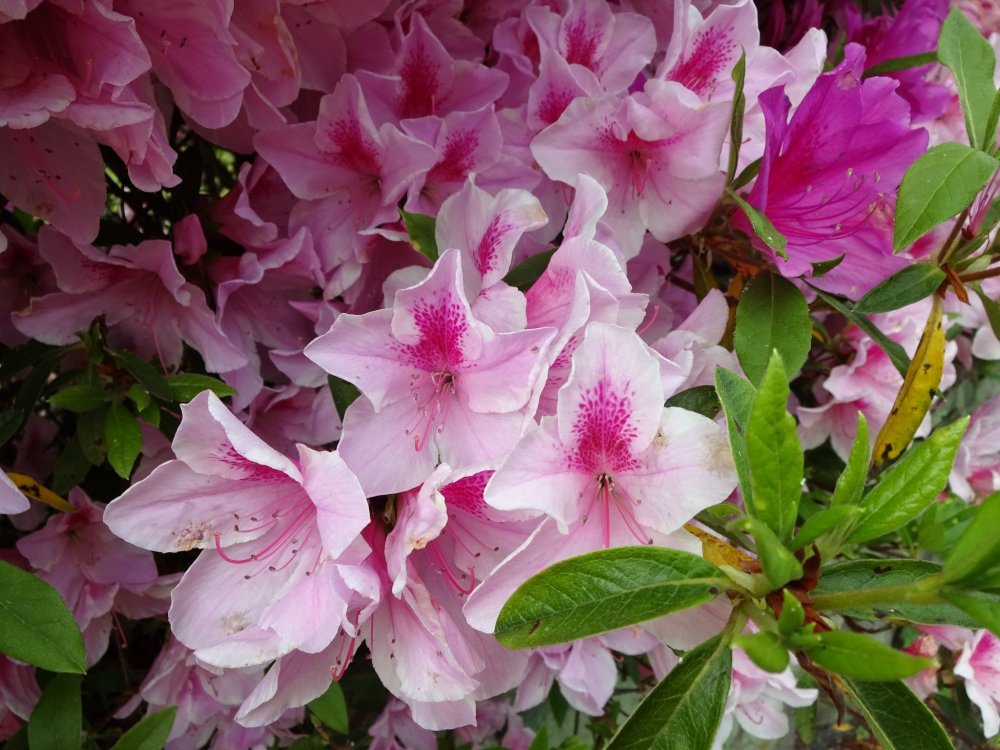 Starting our Rhododendron appreciation with the color pink. 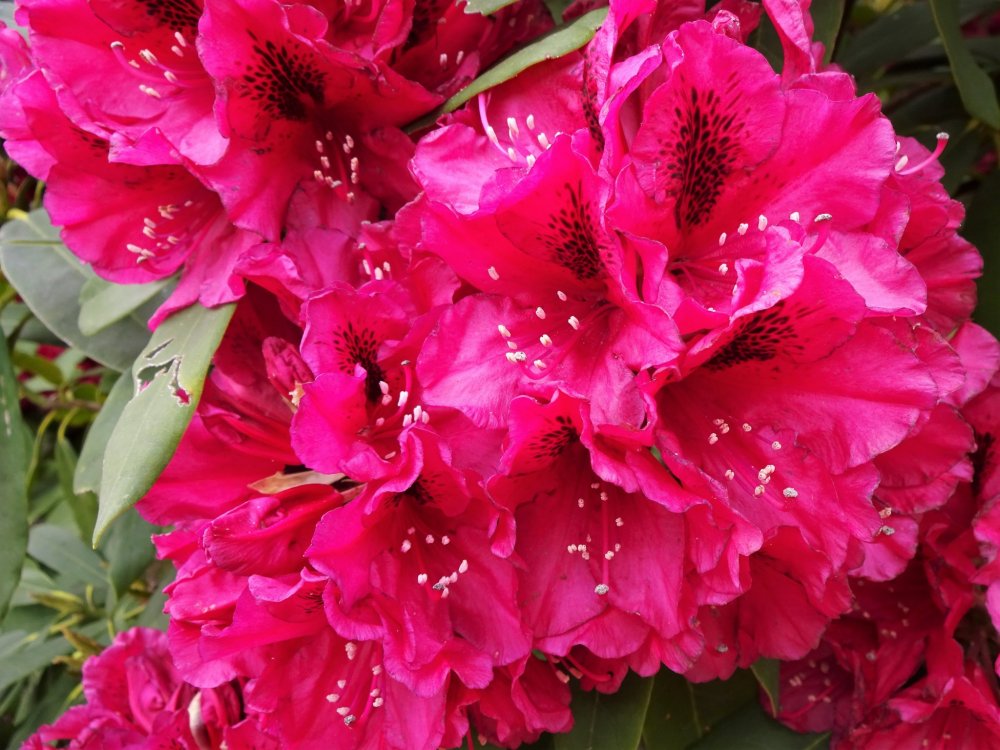 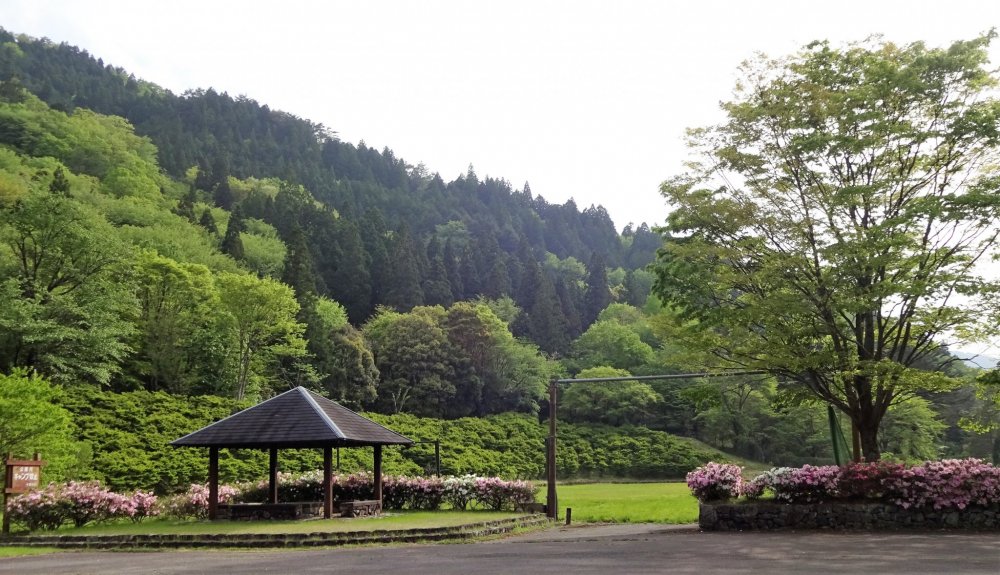 Pavilion to rest in the Rhododendron park. 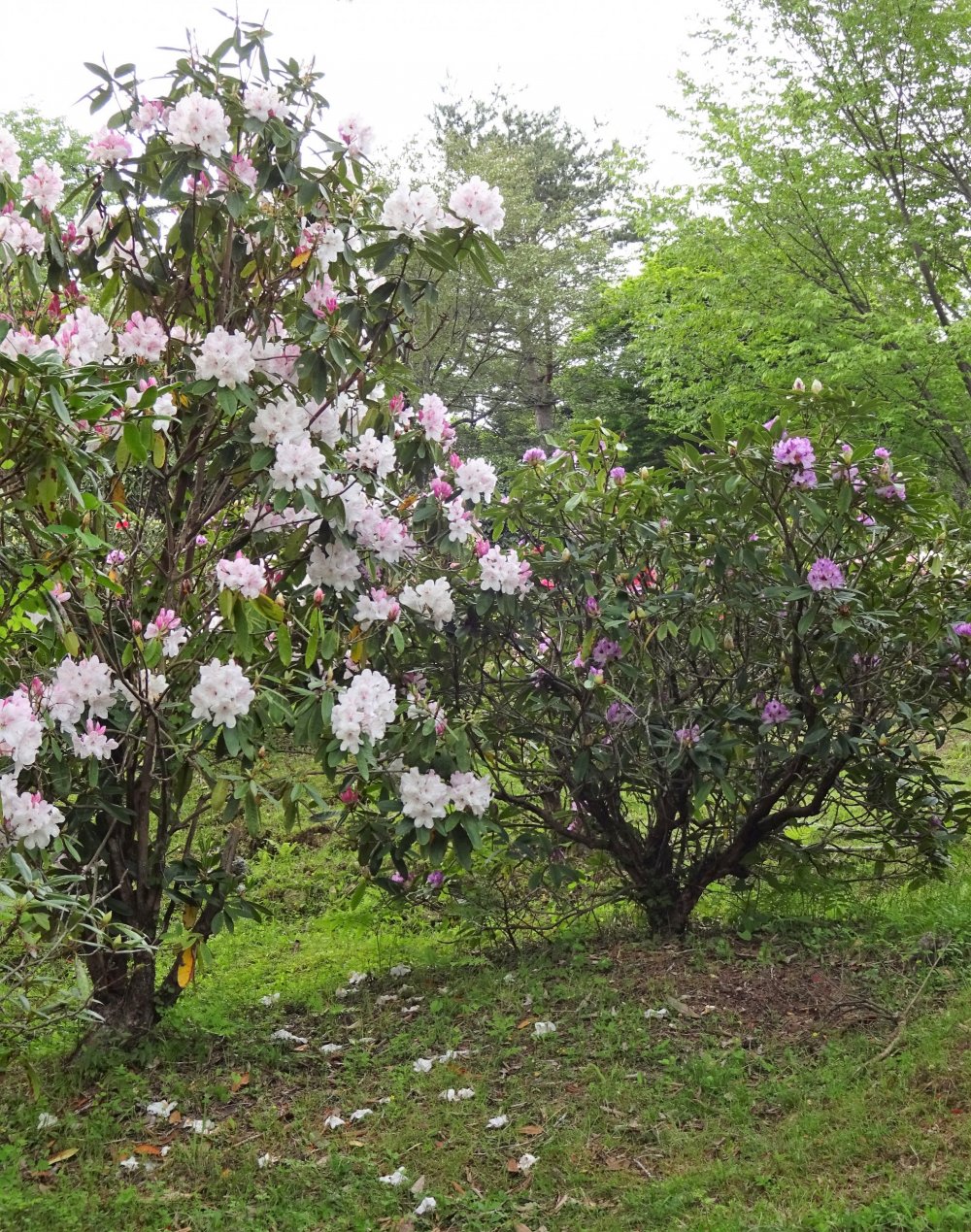 There are many bushes along a marked path. 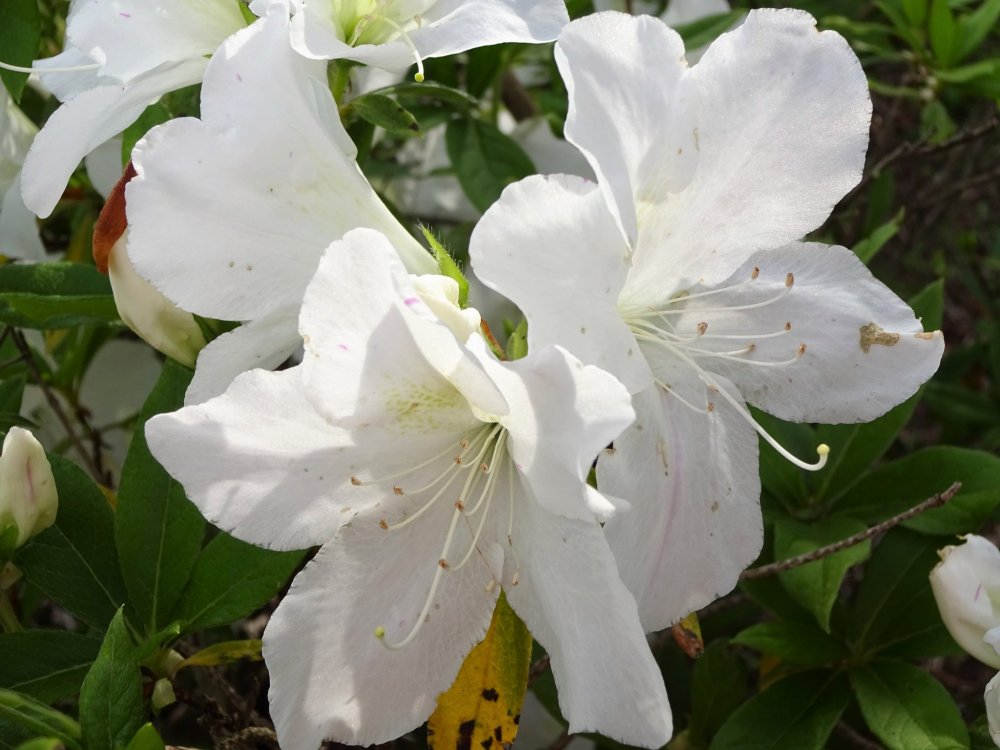 Some white flowers between all the shades of red. 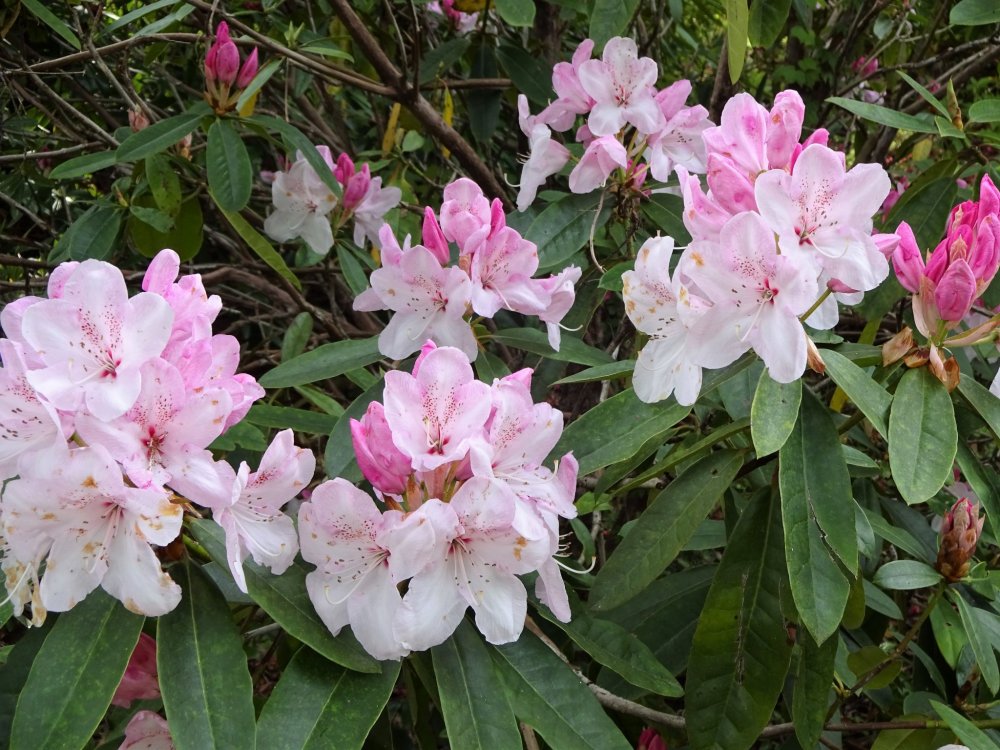 Here are some hybrids, a white and pink mix. 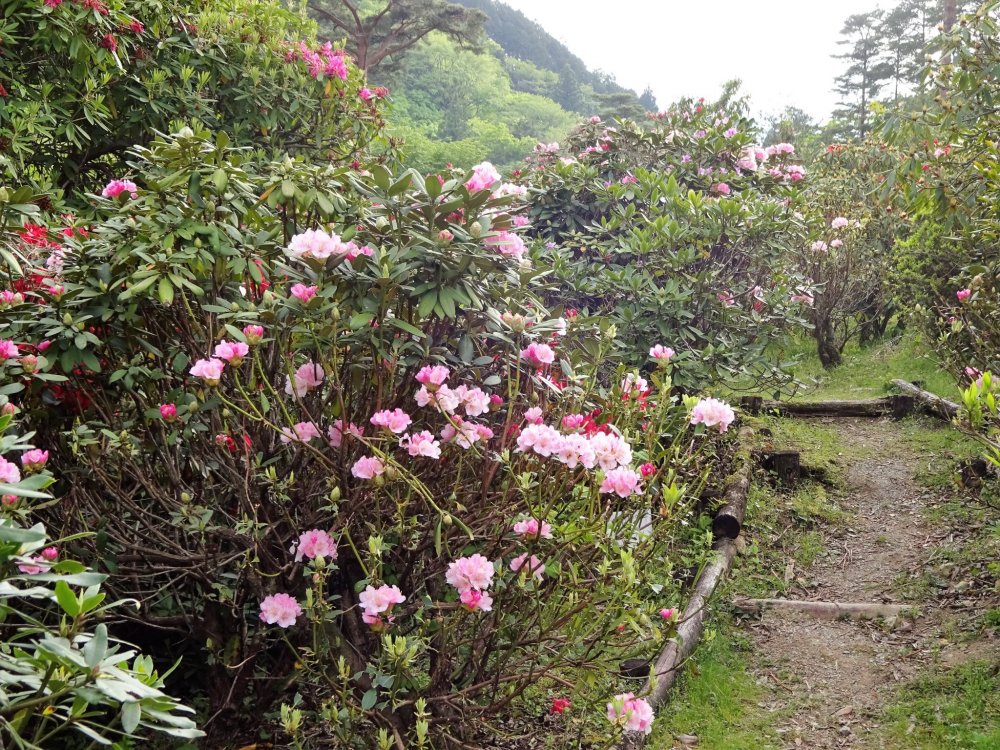 In the background is mountain scenery. 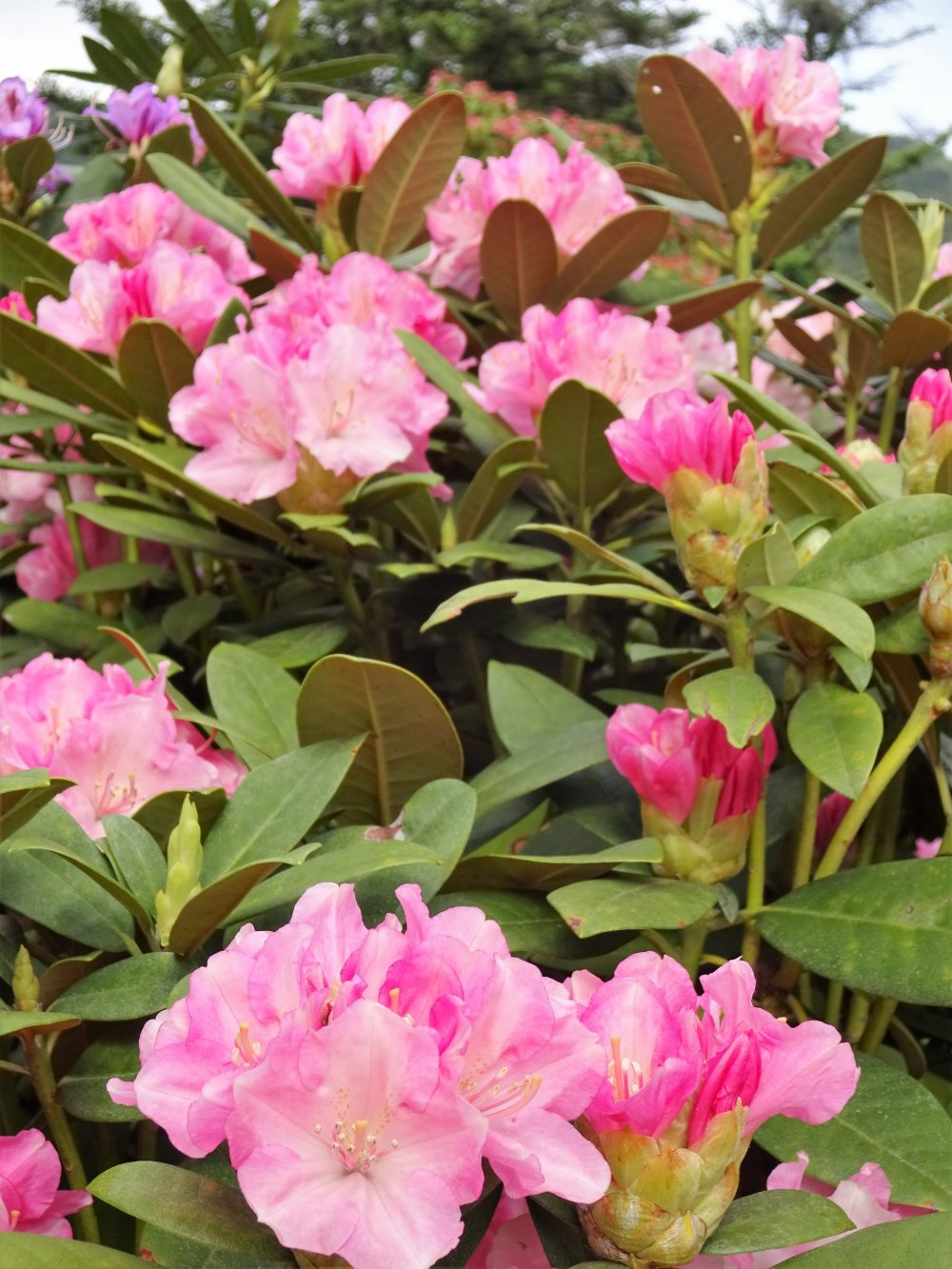 Shades of pink rival the red. 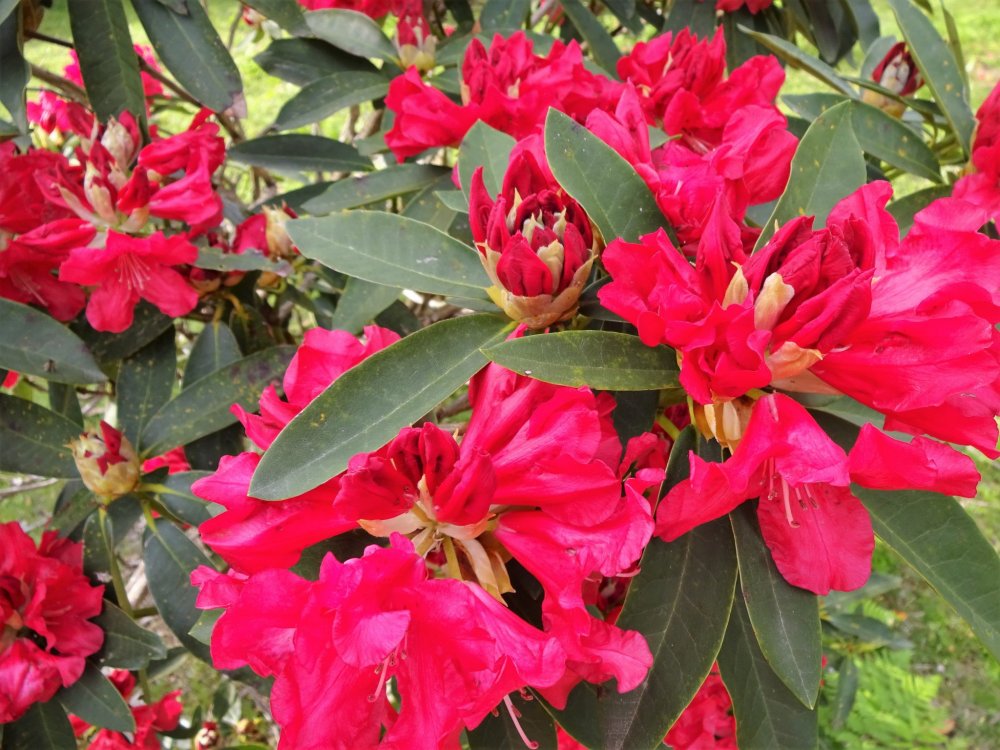 But red is equally nice for a flower photo shot. 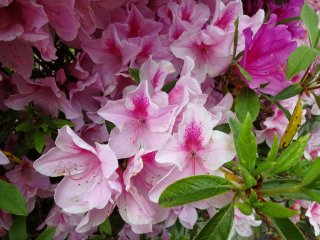 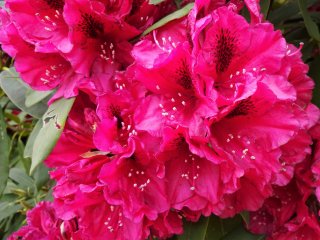 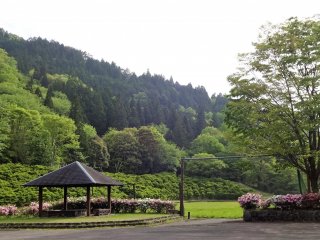 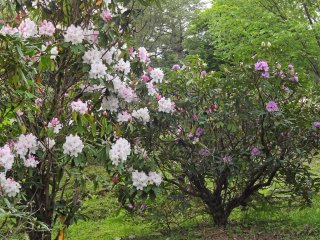 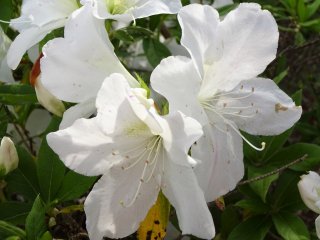 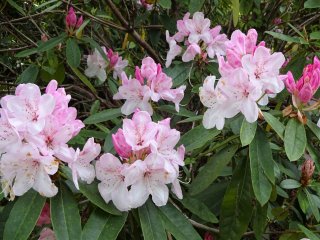 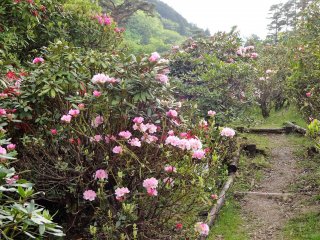 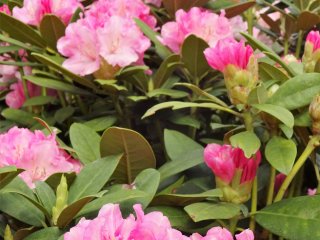 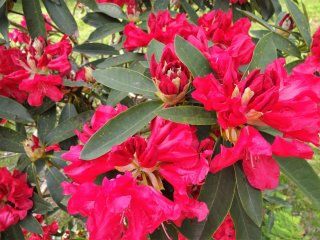 Flower appreciation is a popular hobby in Japan and the country's four seasons offer many opportunities to enjoy a great variety of flowers and flowering shrubs and trees. While pink cherry blossoms and colorful autumn leaves attract throngs of fans, the colorful varieties of equally spectacular Rhododendron and Azalea, Shakunage and Tsutsuji in Japanese, seem highly underrated and overlooked.

Rhododendron and Azalea belong to the same genus, also called Rhododendron. This is confusing and it can make plant identification difficult. Generally, Rhododendrons are larger plants than Azalea and they are usually evergreen while Azalea are deciduous. The tree-like Rhododendrons have typically bell-shaped large flowers. The shrub-like Azalea, on the other hand, have funnel-shaped flowers. This does not really matter to the average person who just wants to appreciate beautiful colorful blossoms.

There are said to be 1,000 Rhododendron varieties in the world and almost 100 varieties in Japan, some of which are specific to a certain region or a mountain area. The blooming season is quite long. Some varieties start blooming in mid-April and others in summer.

At the "21 Century Forest Park" in Totsukawa Village in the south of Nara Prefecture you will find a collection of varieties from around the world. There are 10,000 plants located in a mountain setting near famous Tamaki Shrine. You will find many different colors, including shades of red, pink, mauve and purple, and white. It is recommended to visit both locations on the same day if you want to spend a day outdoors. You can relax in one of Totsukawa's onsen, for example, at Subaru no yu where you can also stay overnight.

The flowers are in bloom from early April to late May, and the park is most popular during Golden Week when Totsukawa Village holds some events here. This is the time of the year when bento boxes for a picnic in the park are available at the park's visitor center. Golden Week is the only time when this park is busy though. Come another week and you have the many flowers all to yourself. The gates of the park are open from 9am to 4pm.

Now, you need a car to get to the park because there is no public transport. If you plan a road trip across the remote Kii Peninsula this year, either by rent-a-car, camper van or your own car, then make sure to drive through Totsukawa Village, the "largest village" of Japan and visit this flower park, before making your way to the famous Kumano Sanzan, the Three Grand Shrines of Kumano, and the Kumano Kodo pilgrimage trails. A part of the Kumano Kodo trails actually pass through Totsukawa.

Totsukawa Village is not easy to get to. There are no train lines to get to Totsukawa. Access by public bus from Yagi City or Gojo City in Nara Prefecture or from Shingu City or Hongu Town in Wakayama Prefecture is possible. Nara Kotsu operates the busses and they run three times per day each way. Bring a lot of time with you! From Yagi to Shingu the bus covers a distance of almost 167 km. There are 169 bus stops along the way. One stop is right in front of Subaru, the onsen and hotel. From there you can go by taxi, a journey that is 10 km up Mount Tamaki before you get to the flower park. Quite an adventure!

Elizabeth S 3 months ago
Lovely photos! While it's common to see smaller azaleas, it's refreshing to see giant rhododendrons. They're lovely for shade and color in summer.
Reply Show all 0 replies
1 comment in total

Elizabeth S 3 months ago
Lovely photos! While it's common to see smaller azaleas, it's refreshing to see giant rhododendrons. They're lovely for shade and color in summer.
Reply Show all 0 replies
1 comment in total