You might have heard of The Way of St. James, a Christian pilgrimage route that lead across Europe to the Cathedral of Santiago de Compostela in Spain where the remains of Apostle Saint James are buried.

A similar, over 1,000 years old network of pilgrimage routes exits in Japan where all trails lead to the Hongu Taisha, a shrine in Wakayama Prefecture’s Kumano area.

The European and the Japanese pilgrimage routes, although tens of thousands kilometres apart, not only share the pilgrimage tradition but they both are also UNESCO World Heritage Sites.

The Kumano area, a mountain range full of scenic beauty, traditions and mystery, is often referred to as the spiritual heartland of Japan.

For over 1,000 years Kumano has attracted Japanese worshippers and seekers and old trails, more or less intact, cross-cross the Kii Peninsula and lead to some sacred sites.

The Kiiji route was the main trail travelled by imperial families and aristocrats from Kyoto, Japan’s ancient capital leading along the west coast of the Kii Peninsula via what is now Wakayama City to present-day Tanabe City, both located in Wakayama Prefecture.

Near Tanabe City the Kiiji trail splits into the Nakahechi route, which from there cuts across the mountains, and the Ohechi route which continues around the southern tip of the Kii Peninsula.

The Kohechi route starts at the Buddhist temple complex of Mt. Koya and runs across the center of the Kii Peninsula. The Iseji route runs along the east coast and connects the Ise Grand Shrine with the Kumano area.

As the old saying goes “All roads lead to Rome.” so here too, all trails lead to the Hongu Taisha, one of the three Grand Shrines of Kumano.

Parts of the trail were paved with stones to avoid erosion by the elements and apparently to ease the pilgrims’ journey.

However, anyone who has walked these stone paths and climbed countless stone steps is forgiven for wondering whether the real purpose was not to test the pilgrim’s spirit and endurance.

No one really knows who first laid them or when but some of these stone paths have remained until today and have now become a symbol of the Kumano Kodo.

Oji (subsidiary shrines of the Kumano Grand Shrines) were established along the Kiiji Trail and the deities enshrined were thought of as offspring of the gods worshipped at the Three Grand Shrines.

These Oji, said to number 99, offered not only places of worship but also places for a much needed rest. Some of these Oji are still there and for the modern-day pilgrim or hiker they mark stages of travel more than places of worship along on the Nakahechi trail.

Some of these Oji are still important landmarks as much as they used to be points of passage to the sacred sites in the past.

Takijiri-oji marks the beginning of the Nakahechi trail and Chikatsuyu-oji can be found on the way to the Hongu Taisha.

In the old days there were also many tea houses along the pilgrimage paths that served pilgrims as a place for rest and information exchange.

Today there are only vacant lots and any remains are overgrown by lush green vegetation. Often there are some benches at these spots where you may sit down and rest.

You better bring your own tea and provisions though or else you might starve as there are no convenience stores around the next corner of the forest.

Let your fantasy take hold and follow the tales of pilgrims and locals who walked and lived along these trails.

Many of their tales are retold, even in English, on wooden boards that can be found along the trails. 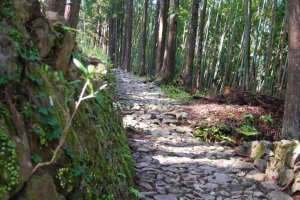 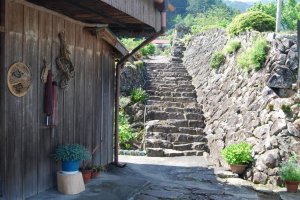 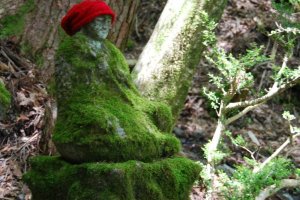 Alena Eckelmann Author 5 years ago
Totally agree! Soaking in a hot spring pool after a long hike is great. Kumano has many onsen for visitors to enjoy!
Reply Show all 0 replies

Justin Velgus 5 years ago
Very cool. I hope to visit one day. I get a similar feeling when go retrace the journey of Matsuo Basho to places he visited during his Narrow Road to the Deep North saga. My favorite (so far) is a 10km trek through Naruko in Miaygi Prefecture. It is nice to end with one of the area's hot springs.
Reply Show all 0 replies
2 comments in total