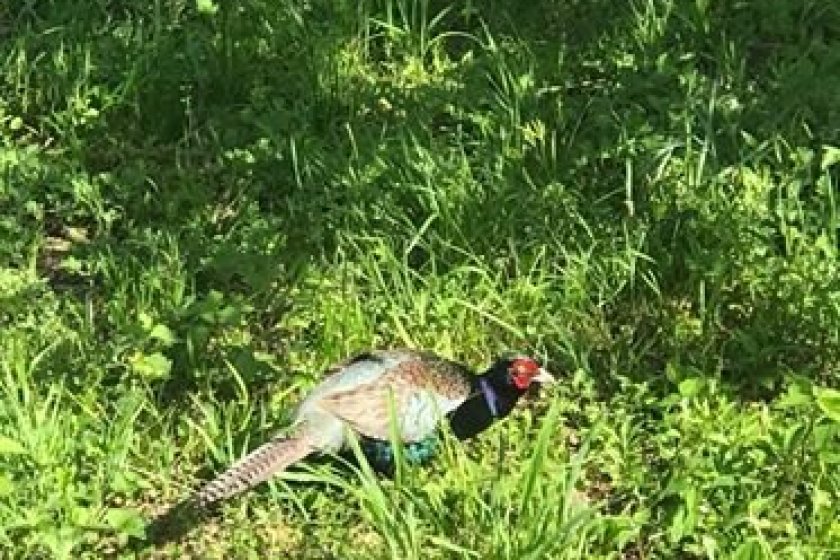 The Green Pheasant is a beautiful bird to watch.

Did you know that the Green Pheasant is Japan's National Bird?

The Green Pheasant, an omnivorous bird, is endemic to Japan. The bird featured in these photos is the "resident pheasant' behind my house. It is a colorful male bird and I enjoy watching it from my window.

If you walk the Kumano Kodo trails, you might catch a glimpse of a Green Pheasant. They can be seen roaming around in unattended meadows and abandoned paddy fields in the Hongu area, near the ancient pilgrimage trails.

I live in Kumano and bird-watching near my home has become a recent interest as traveling is restricted now. I enjoy looking at scenes of nature, and I find watching flowers and birds very calming and relaxing.

Truth to be told, finally there is time to engage in such activities, which gives me a chance to study the flora and fauna of Kumano. When I am walking the Kumano Kodo trails with visitors, I am often asked about wildlife, trees, flowers and herbs.

There is so much to experience in Kumano for those who walk slowly and who engage all senses.

In a recent article, written by Her Imperial Highness Princess Takamado and published in Fujingaho Magazine in March 2020, it is stated that the Green Pheasant was mentioned in Japan's oldest history books, in both the Nihonshoki and the Kojiki, both published in the 8th century! The bird was even mentioned in the Manyoshu, an ancient collection of poems also dating back to the 8th century.

This might not be widely known but almost everyone, Japanese and foreigners alike, know the folk tale of Momotaro, the Peach Boy. A pheasant, together with a dog and a monkey, become Momotaro's friends and help him in his quest against evil.

The three animal friends of Momotaro remind me of the German fairy tale of the "Town Musicians of Bremen" (Die Bremer Stadtmusikanten) which features four animals: a donkey, a dog, a cat and a roster. While the moral of the stories is different, the characteristics of the animals and their combined strength to fight for the greater good provides some encouragement and amusement in these times of worry and anxiety. 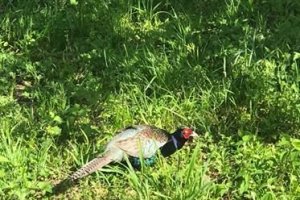 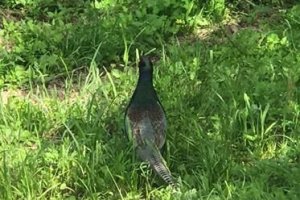 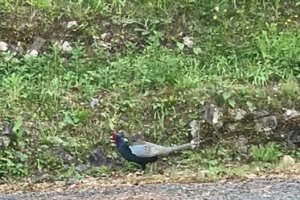 Kim 2 years ago
What a beautiful bird!
Reply Show all 0 replies

Bonson Lam 2 years ago
It is actually very hard to take a photo of the green pheasant close up. Well done. I saw one in the fields once, but it got away from me.
Reply Show all 2 replies

Elizabeth S 2 years ago
Where I live we have bird sanctuaries and farm fields. The pheasants are everywhere! And they’re funny things. When they start calling in the neighbor’s field, I quietly walk over to take photos. When you think they’re in this bush they’re in that clump of grass. Do they teleport or are they ventriloquists or something? !
Reply

Bonson Lam 2 years ago
Too funny! I didn't know they had such complex personalities! Glad you have lots of opportunities to see them. I only saw one in Kumamoto, though I have been in the same field multiple times.