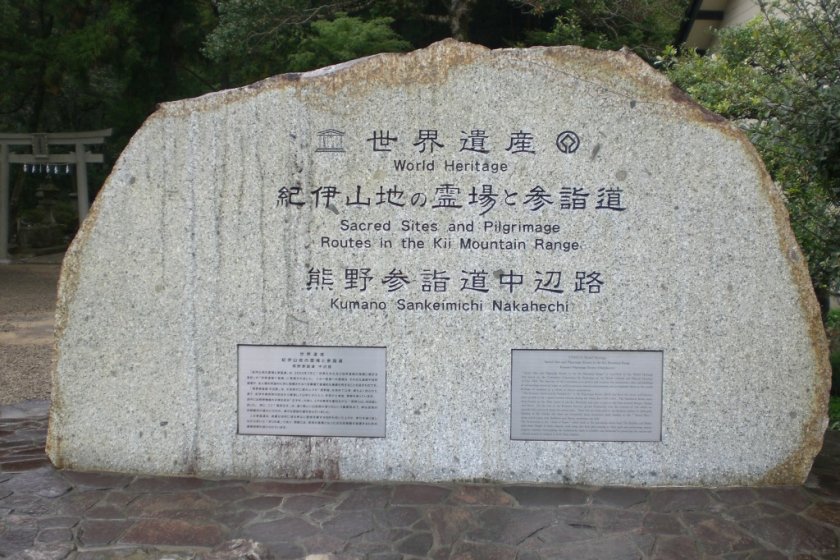 Walking on the Nakahechi Trail – A personal Experience

Stone marker at the trailhead of the Nakahechi near Takijiri (Photo: Felicitas Artym / JT)

Walking along Japan's old pilgrimage trails is popular, not only with pilgrims.

Hikers and modern day seekers come to Kumano to walk along the Nakahechi or Kohechi trails, which both lead to the Hongu Taisha, one of the Three Sacred Shrines of Kumano. What I had read about Kumano online sounded promising, hence I put a walk along the Kumano Kodo old pilgrimage trails on my schedule for my next Japan trip.

I have to admit though that I had a completely different travel plan for my journey to Wakayama Prefecture in autumn 2011. Originally I meant to walk along the Kohechi pilgrimage trail in memory of my karate teacher – Fujinaga Sensei – who had died much too young.

However, in summer 2011 typhoon Talas hit the Kii Peninsula very hard and in its wake houses were destroyed and streets and mountain trails became impassable. Unfortunately parts of the Kohechi trail were also affected.

Hence, I was recommended by the local tourism office in Tanabe to walk the Nakahechi, another trail of the Kumano Kodo old pilgrimage trail network. I took their advice and planned my work along the Nakahechi trail instead.

For my first overnight stay I had a booking at Kiro-no-Sato Lodge in Takahara Settlement. To get there from the trailhead near Takijiri-oji Shrine seemed a short walk – merely 3 km.

Being from Switzerland, I am used to hiking in the mountains and hence I thought that walking just 3 km is a bit ridiculous but why not. After all, it was my first day walking in the mountains on Japan’s Kii Peninsula and I wanted to take it easy and leisurely get used to the walk. Far from it – how mistaken I was!

I bought a walking stick made of dark bamboo from one of the souvenir stalls near the trailhead and gave it the name “sempai”. Fully equipped I started walking.

My biggest worry was that I would get lost along the way. Based on my hiking experiences in Switzerland, trails are often not clearly marked and especially in the mountains one has to pay great attention to actually spot the signpost. Sometimes signposts are just written marks on rocks, which are easily overlooked.

After walking for a short while I realized that I needn’t worry. Large wooden markers in Japanese AND in English clearly showed the way.

However, trouble arrived soon enough. After only a few meters of walking, the trail began to ascend steeply. My backpack was a heavy 12 kg and I had to balance the weight carefully when stepping over rocks and large roots. The incline of this sloop was around 20% and the trail went up and up and was seemingly never-ending.

After only a few hundred meters I was ashamed of my arrogance to have totally underestimated this first 3 km on the Nakahechi trail. Humbled, I pulled myself together and continued stomping ahead, inwardly happy that it was “only” 3 km.

I started to listen to the forest and it sounded so alien – even the crows sounded different to the crows back home. Obviously! They crowed in Japanese!

Despite the struggle uphill, I began to feel at ease at some point and after 1.5 km the trail began to even out. I was rewarded with a beautiful view over the surrounding mountains and suddenly I had reached my destination for the day.

The 3 km had taken me 2.5 hours to walk, and worse yet, when I arrived in Takahara, a heavy rain was pouring down.

Luckily the lodge was easy to find and by now I was really looking forward to a hot bath and a cold beer, and I should promptly get both! 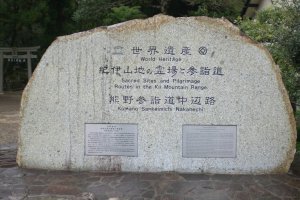 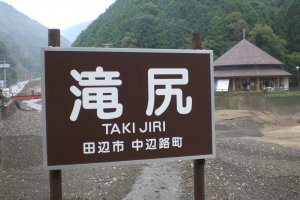 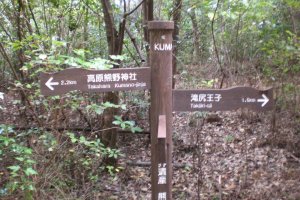 Mary Kelly 7 years ago
Thank you for these articles, really makes me excited about hiking the Kumano Kodo Friday 5/23/14
Reply Show all 0 replies
1 comment in total