A "Temple Hotel" with outdoor activities near Nachi-Katsuura

When think of Adventure Travel, going to a temple does not spring to mind. However, a stay at Daitai-ji temple in Nachi-Katsuura Town offers outdoor activities in addition to temple experiences. The perfect combination to enjoy both: nature and spirituality.

Part one of the "temple adventure" includes a visit to the sauna tent by the river followed by a swim in the cool waters of a stream. You might have pitched your tent at the temple or parked your camper van here.

Part two of the “temple adventure” starts early in the morning when staying guests at Daitai-ji are invited to join the prayer service in the main hall. This is followed by a Zen meditation.

Prayers for peace and healing

At morning prayer in the main temple hall guests sit down very near to the abbot and so they can observe everything closely. The temple's abbot, Mr. Nishiyama, is reciting many sutras and mantras. The chanting is accompanied by the rhythmic banging on a “wooden fish”, a percussion instrument, which is used by monks to keep the beat while they are chanting. In this hall Shakyamuni Buddha, thought of as the Historical Buddha, is worshipped.

The monk’s chanting is mixing with the chirping of the birds outside in the garden. You might want to close your eyes and concentrate on the sounds around you. At least this is a nice excuse if you are still sleepy and your eyes are too heavy to keep them open.

Next you move to the smaller hall next door for another prayer session. Here Yakushi Nyorai, the Medical Buddha, is venerated. The statue of this Buddha is hidden behind some wooden doors. He is a hibitsu, a secret Buddha!

The keen observer will notice many stones on the main altar and also crystals and smaller stones attached to the window facing the altar. Many of these stones have a comma-shape that is said to resemble an ear. These stones were left here by people who came to petition the Medical Buddha.

This Medical Buddha here at Daitaiji is said to have the power to heal any illness that affects the ears. In the old days many people who had lost their hearing came here in the hope for a miracle to suddenly regain their hearing. Nowadays people just go to the hospital and get a hearing aid. Hence, the Medical Buddha at Daitaiji became almost unemployed. So, he leveled up and broadened his scope of healing activities which now includes all sorts of illnesses, even mental illness.

Around sunrise it is nice to climb the hill behind the temple and ring a large old temple bell. If you are lucky, then Mr. Nishiyama guides you to the top. There he explains the routine to go through when ringing the bell.

First, put your hands together in Gassho prayer style, then bow towards the bell once. Now you are ready to ring the bell by pulling the heavy wooden log back with a rope and then release it so that the log hits the bell. Be careful to hold the rope tight and pull it back again as soon as the log hit the bell because it is not supposed to bang against the metal repeatedly. Put your hands together again and bow towards the bell. If you like, you can leave a small donation.

You probably already know that the bell at Buddhist temples is rang 108 times. The number 108 represents human desires that we need to overcome if we want to reach enlightenment. Now, ringing a bell 108 times takes time and some energy too. Hence, there is a short-cut version: just cut out the zero and ring the bell 18 times. Apparently you accumulate the same amount of merit as though you would have done 108 gongs.

An interesting story told by the monk is that this bell is actually an old temple bell. In many other temples in Japan the current temple bells are fairly new because the old bells were confiscated during the Meiji period and melted in order to produce weapons. The temple bell here at Daitai-ji was not taken because it is located on a hill and it was too heavy to be carried down at the time.

Usually a temple’s bell is located right by the temple gate but there is a reason why at Daitai-ji this is different: this temple bell also served as a fire alarm in the old days! In order for the villages behind the hill to hear the temple’s sound, the bell had to be located on top of the hill. From the hill one can actually see the villages below. They are nestled in-between rice fields and the Kumano Kodo pilgrimage trail passes through.

Exploring the temple at leisure

At Daitai-ji you are free to explore the temple and its grounds, which seems such a privilege considering that moving around many temples in Kyoto and Nara is quite restricted.

The temple buildings are surrounded by gardens and all around the whole compound is forest. You will notice that all looks quite neat and clean at Daitai-ji. This is thanks to the combined efforts of many people, including locals and seasonal helpers from further away.

A shower at the shelter

The shower and bathroom facilities are quite new too, and there is another interesting story to tell about this.

The Kii Peninsula was hit by a massive typhoon in September 2011. Villagers sought shelter at Daitai-ji which is an evacuation ground because of its location on a hill. At the time the shower and bathroom were old and the people felt uncomfortable using them.

This is when Mr. Nishiyama decided to reform the temple facilities in order to, as he put it, “create a comfortable shelter” in case another major natural disaster hits this area. Meanwhile guests who stay at Daitai-ji benefit from the new and clean facilities.

If you look closely, you will notice that there are two temple styles combined, namely the Kyoto-style and the Nara-style. Maybe you have visited Kyoto and Nara before coming to Kumano and you can see the difference? I

In Kyoto many temples have nice gardens and many works of art can be seen decorating the walls inside the temple buildings whereas temples in Nara often have no large garden but there are many different types of Buddhist statues to be found in the various temple halls.

So, here at Daitai-ji you can have it all: a garden, decorative art work with a Buddhist theme in the rooms and along the corridors, and many Buddhist statues to admire in the temple halls.

Meditation in the chicken shed

If you stroll down a short slope, then you come to the newly refurbished spacious Zazen meditation hall. This is now a sparkling clean large hall fitted with benches on both sides on which there are meditation cushions. There is space for about 20 people.

The monk told us the funny story that this building used to be the chicken shed of the former monk and he added with a smile that it was not uncommon for Zen monks to meditate in primitive sheds. What a luxury to be sitting in this reformed hall!

Many large windows make the room light-filled and they allow people to get a glimpse of the Japanese garden outside, or one can listen to nature's sounds during the mediation.

Been to a temple kitchen?

My favorite place in the temple, however, is the large old temple kitchen. Massive wooden beams run across and form the ceiling. Old wooden cabinets line the walls.

Daitai-ji does not serve meals but staying here means self-catering. So, bring your ingredients and cook, or get a bento box and bring it back, or alternatively, call a taxi or drive to Katsuura Town and go to a restaurant there.

All modern appliances are available and guests are welcome to use this kitchen and cook their dinner here. This is a nice experience if you stay here with you family or a group of friends. There is a large wooden table in the kitchen and a tatami seating area where you can enjoy your meal together.

This temple is said to have an 800 year history at least, some say a 1,200 year history. Before the beginning of the Edo Period (1600), Daitai-ji was apparently part of the large estate of Nachisan Seiganto-ji temple at the Nachi Otaki Waterfall and belonged to the Tendai Sect of Japanese Esoteric Buddhism (Mikkyo in Japanese), which is headquartered on Mount Hiei near Kyoto. If you have been to Nachi and to the Nachi Taisha shrine and the Nachisan Seiganto-ji temple, then you can appreciate this piece of interesting historical information.

The temple changed its affiliation and became a Zen temple in the Rinzai Sect tradition. Asked why this happened, Mr. Nishiyama smiled and said that Mikkyo monks, more often than not, were warriors in disguise and hence were the declared enemies of the samurai who were more amicable to Zen Buddhism.

Mr. Nishiyama grew up at a temple nearby. When the former abbot of Daitai-ji grew too old to run this temple, he looked for a suitable successor as he did not have a son. Mr. Nishiyama agreed to take on this role. At the time he was a young man who wanted to do many other things but he joined the monk training then, because “it is easier when one is young”.

One of his most impressive memories from his monk training days is the winter training session from December 1 to 8. It is a long continuous Zazen session with only 3 hours sleep each day. The monks in training had to sleep sitting in Zazen position outside in the freezing cold corridor.

With the "occupational" base covered, he then travelled “a lot” in Southeast Asia. His objective was to learn enough English to be able to communicate while travelling. He speaks very good English now and is able to provide explanations in English.

Later he studied to become a teacher at a university in Kyoto. At first he choose Social Studies as his subject but later changed to English Language. He found it was boring to give a 50 minutes lecture, instead he wanted to use games and have fun in the classroom.

Luckily he did because foreign guests now benefit from his great English skills and they can enjoy his humor!

Read more about Daitai-ji and how you can enjoy camping and sauna there. 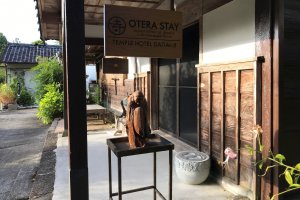 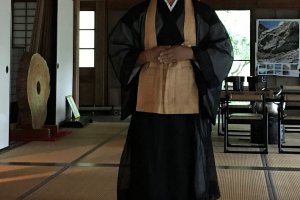 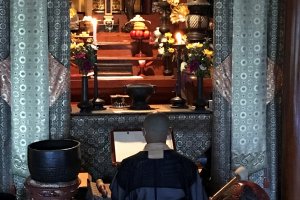 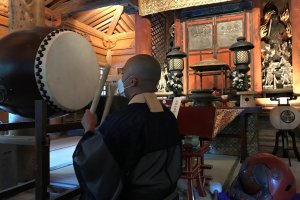 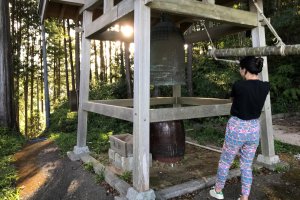 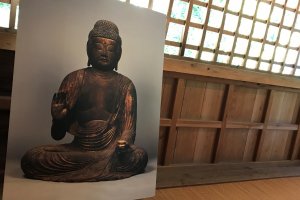 Gary Luscombe a year ago
It is great to be able to have a conversation with the monk too. They always have so many fascinating stories about the temple and surrounding areas but it can be difficult for inbound travelers to communicate.
Reply Show all 0 replies

Kim a year ago
This was a great read! Sounds like such a pleasant place to enjoy the best of nature and spirituality.
Reply Show all 0 replies
2 comments in total