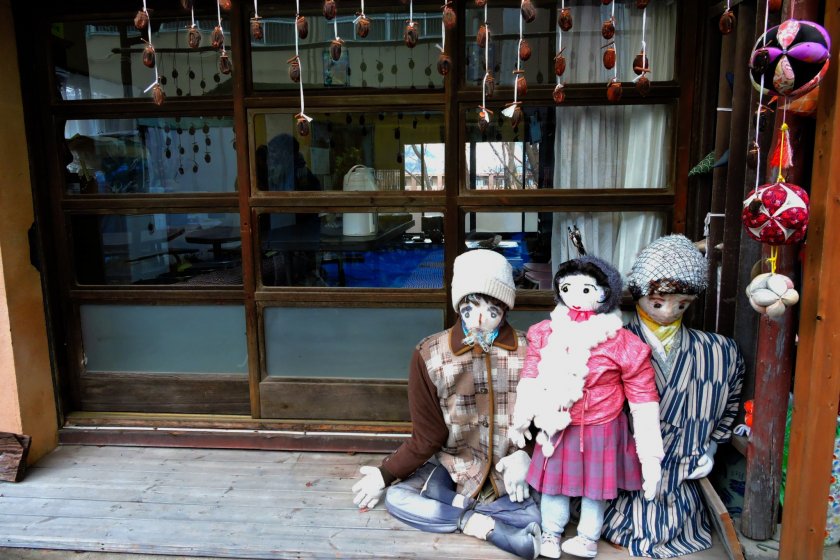 Make & share food with locals in an old Japanese house

Scarecrow Villa is the headquarters of a group of elderly Japanese women. They meet there to plan volunteer work and share creative crafts—specifically, making scarecrows. The traditional-style wooden house is not large but has a lot of rustic charm. A trio of scarecrows were enjoying the winter sun outside and strings of dried persimmons hung from the eaves. Perhaps in the summertime, it would be strings of onions.

Naturally, you must take off your shoes at the entrance.

The pleasures of sitting around a kotatsu

Our group was ushered into a room with a tatami floor and encouraged to get comfortable around a low table covered with a quilt—a kotatsu. These cozy tables have a heat source attached to their underside. These days most kotatsu are electric, but at Scarecrow Villa the kotatsu is an older version and is heated by a hot briquet. The idea is to sit around with your legs underneath the table, chatting, reading, or eating Japanese oranges in the wintertime. I loved it!

Our hostesses brought out green tea and pickles to share. Our interpreter explained that this was a traditional icebreaker used to welcome guests into somebody’s home.

Although nobody is living in the house now, you can easily see that it was once a real family home. There are diverse pictures and ornaments scattered everywhere. The interpreter pointed out the framed sumo wrestler handprint on the wall.

The house has a typical traditional layout, divided by a central corridor. On one side are the kitchen, bathroom, and laundry, and on the other side three rooms take up the length of the house. Sliding doors mean the three rooms can be opened up into one huge room and there are large windows at either end that face the garden.

I’m not sure how old the house is but it has an original toilet of the non-flush variety. I think it is very interesting to see first hand how people lived before electric appliances and modern plumbing became standard.

Elderly Japanese women, especially country women like our hostesses, are typically active, intelligent, involved in volunteer work, fantastic cooks, and many of them function as guardians of traditional Japanese handicrafts—like scarecrow making.

Making scarecrows is usually done by men, as it requires a lot of physical strength. About 10 years ago our hostesses became inspired by the scarecrow village in Tokushima and decided to learn the craft. Make sure you check out the scarecrow with the Heian Era twelve layer kimono in one of the tatami rooms.

Our interpreter also explained how our hostesses created a program to provide lunch boxes for children in the area who were going without a midday meal, and later helped organize study halls where children could do their homework after school. You can be sure that the profits from your experience fee will be put to good use!

The main event at Scarecrow Villa is a seasonal cooking experience. Since I visited in December, we made hoto noodles from scratch. Hoto is Yamanashi’s regional dish and is special for a number of reasons. Rice has never grown well in Yamanashi, so thick wheat noodles became a staple instead. Combine those noodles with big chunks of vegetables and meat in a broth flavored with miso paste and you have hoto.

The dish is very adaptable. You can change the flavor of the broth to your liking and add whatever vegetables or meat you have on hand. It can easily be made vegetarian, vegan, or halal according to the ingredients selected. It can be spicy, salty, or mild, but it’s always hearty, warming, and satisfying. It is perfect after a hard day of work or sightseeing. Hoto is real Japanese soul food!

Once we finished our tea and pickles we trooped into the kitchen to taste the broth simmering over the gas burners. There were two different flavors. I preferred the mushroom one.

Then we set about making the noodles. Our hostesses helped us don aprons, then one of them demonstrated how to mix water into bowls of flour to make the dough. The interpreter assisted with instructions when necessary.

Once the dough was kneaded and ready to roll out, we tipped it onto large floured wooden boards, covered it with a plastic sheet and stood on it to flatten it. Although this method seemed hilarious at the time, it was actually very effective.

Next, we learned how to roll and stretch the dough and finally how to cut it into noodles.

Meanwhile, the group of grandmothers added chunks of vegetables to the broth. When the vegetables were tender we added the noodles, and finally, the broth was flavored with a mixture of red-and-white miso paste.

In no time at all, we found ourselves back around the kotatsu eating a delicious lunch of hoto accompanied by more home-made pickles, rice balls flavored with delicious mountain pepper, and some simmered vegetables.

There were so many great aspects of this fun 3-hour experience. We could meet local people, learn how to make traditional Yamanashi-style food, see first-hand a typical old-style Japanese house, and briefly enjoy a way of life that is probably disappearing. This day will definitely be one of my most treasured memories. 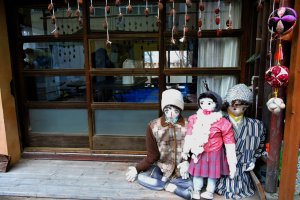 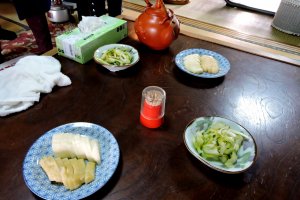 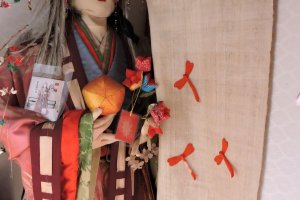 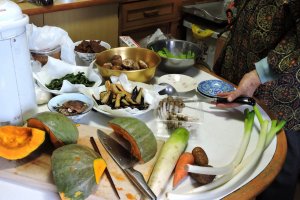 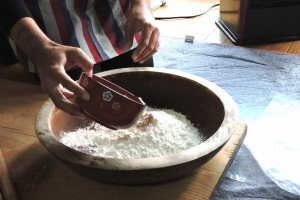 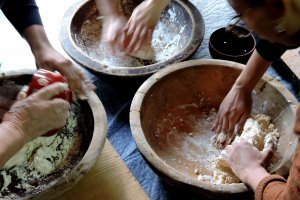 Sherilyn Siy 2 years ago
Thick noodles are very hearty. To make them from scratch must be a memorable experience!
Reply Show all 0 replies

Sleiman Azizi 2 years ago
That really sounds like a great experience. Hoto noodles are great, like an onsen for your belly. And the work these ladies do is top notch and worthy of support. Good on them.
Reply Show all 0 replies
2 comments in total