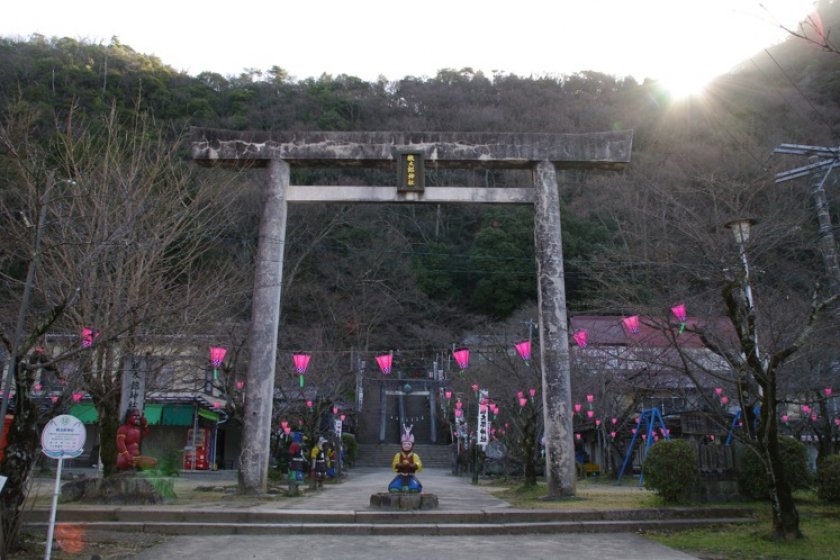 Long, long ago in ancient Japan, an elderly couple living in Inuyama City, Aichi Prefecture, found a remarkably large peach floating in the river while doing the washing. Rather than be concerned about where such a huge peach had come from, or for how long it had been floating in the Kiso river, they fished it out with the intention of having it for dinner. Anyway, when the old couple, (who were childless by the way) opened the giant peach, out popped a little boy!  If that wasn’t enough to scare the pants off anybody, they decided to adopt the baby and raise him as their own. They called him Momotaro, or Peach Boy, probably because someone else had considered “James” a good name for a boy associated with peaches.

Anyway, Peach Boy grew up with no serious psychological problems despite his effeminate moniker, and decided one day to seek revenge on the Ogres from Onigashima that attack the village from time to time, as ogres do. He teamed up with a talking dog, a talking monkey and a talking pheasant, went to the Ogres island, defeated them, (personally I think it would have been easier and more profitable to do a circus act with the talking animals…) and brought home his spoils to his parents and everybody, even the talking animals, all lived happily ever after.

It’s one of Japans’ oldest and best loved fairy tales, and for that reason, a number of regions claim to be the birthplace of Momotaro. Okayama Prefecture claims Momotaro as it’s own, there’s a shrine dedicated to the fruit boy in Fukui and Kagawa Prefectures, and there’s this one in Inuyama, Aichi Prefecture!

At the entrance to the Inuyama based Momotaro shrine and park is the Sentaku Ishi, the “washing stone” where the old lady first found the peach containing the baby. The old lady’s footprints can be seen in the stone! Along the route to the main shrine are concrete statues showing Momotaro emerging from the giant peach, and the companions, the talking dog, monkey and pheasant, various scenes from the story almost had us singing “♪♪It’s a Peach world after all,…♪♪” and later on, the old lady, her husband and many concrete effigies of the ogres too!

At the top of the slope is the shrine itself, and next to the shrine, a Treasure House displaying the actual peach, Ogres weapons, presumably part of the trove brought home by the victorious Peach boy and his talking animal companions. There used to be a mummified ogre and an ogres’ skeleton there some time back, but they were destroyed in a fire so only photographs remain. Everywhere you look are hidden peach shapes, just like the Mickey shapes seen all over Disneyland, from the peach shaped shrine gate to the roof tile faces. In fact, there are puns all over the shrine. A sign on the peach gate says "Momo gata torii o kugureba (If you pass through this peach shaped gate,…)aku ga saru, (Bad luck will be in the past,… “saru” also means monkey) yamai ga inu, (Illness will leave you,… “inu” means dog) wazawai ga kiji. ( Disaster will not befall you, …incidentally, “kiji” also means pheasant)

The shrine has seen better days, and there are many hidden meanings behind the story of Momotaro that we’ll let you discover for yourself. Let’s put it this way, the kids will love the concrete figures and the story of the Peach Boy, while the adults will enjoy the background details more. Either way, a trip to the Momotaro Jinja (shrine) is yet another side trip for when you come to Inuyama. In fact, it’ll be peachy! 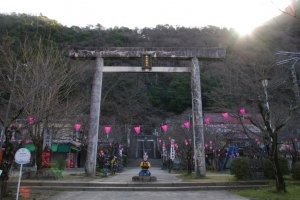 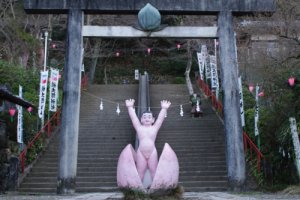 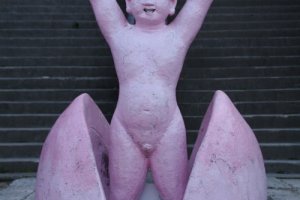 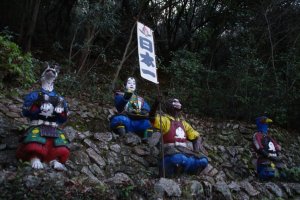 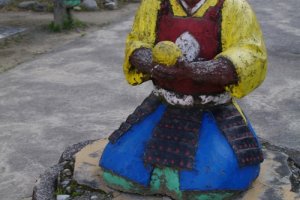