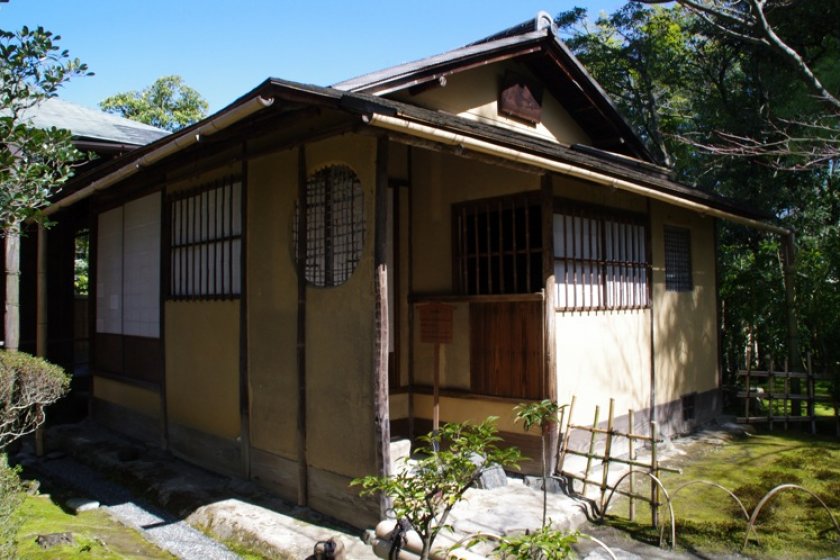 In the shadow of Inuyama Castle

The ancient castle town of Inuyama, 25 minutes from Nagoya in the north of history-filled Aichi Prefecture, must be the only place in the world to offer two National Treasures, owned by two brothers from two different worlds, in one area. Inuyama is home to Inuyama Castle, designated a National Treasure. Another samurai-related National Treasure is the nearby Jo-an Teahouse, an early seventeenth century teahouse, built by Oda Yuraku, (1548 – 1622) younger brother of the Daimyo, Oda Nobunaga.

Unlike his militaristic elder brother Nobunaga, Yuraku was a peace-loving aesthete, a quiet man more interested in devoting himself to the development of the Way of Tea than that of the warrior. Yuraku was a student of the great tea master Sen No Rikyu, and in his own right, was a master and teacher of the tea ceremony. It wasn’t until the Battle of Sekigahara in 1600 that Oda Yuraku's standing within the samurai community changed from being that of a weak samurai surviving in the shadow of his brother, to being one of respect, as he is credited with having taken the head of Gamo Bitchu, the veteran General who fought in the front lines of the doomed Western Army. Gamo’s was the only head ever taken in any battle by Yuraku.

Yuraku is better remembered today for having given his name to the area south east of the current Imperial Palace, and one stop south of Tokyo Station now known as Yurakucho, where he once held land and a mansion.

Long considered a masterpiece of architecture, the Jo-an tearoom was originally built in 1618 and stood in the grounds of the Kennin-ji, a temple in Kyoto. It was relocated to Tokyo and later Kanagawa before finally coming to Inuyama in Aichi Prefecture in 1972, where it became part of the Yuraku gardens (also spelled Uraku) in the grounds of the luxurious Meitetsu Inuyama Hotel. The grounds also feature the tea master samurai’s former study the Shoden-In Shoin, and other tea ceremony houses. For 500 yen you can enjoy a bowl of green tea and seasonal wagashi sweets overlooking the traditional gardens complete with bamboo groves, raked pebbles, stone lanterns and moss-covered rocks from the veranda.

The teahouse, made a National Treasure in 1951, is said to be one of the three finest teahouses in the country. Simple in its design in accordance with Tea Ceremony rules, it has a low, wooden shingle capped roof covering soft yellowed walls of clay-covered bamboo webbing. The teahouse is entered via the Roji (dewy ground) Garden. From there, the samurai would remove their katana long-swords and leave them on the rack outside. (The shorter wakizashi swords would be worn at all times.) Crawling into the main room through the Nijiriguchi, a tiny door to remind them they are entering a simpler world, they would then sit on their folded legs in the furnitureless tea room, measuring just two and a half tatami mats in size. Meanwhile the master would prepare the tea in the three tatami-mat Mizuya preparation area. 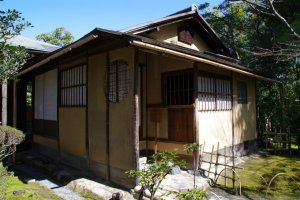 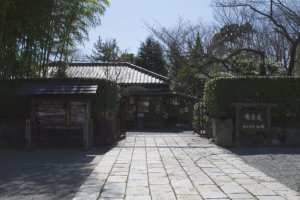 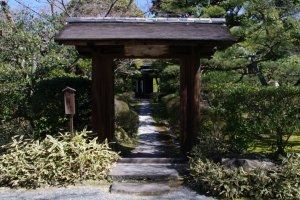 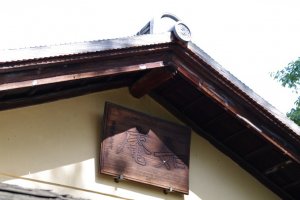 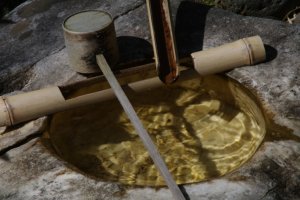