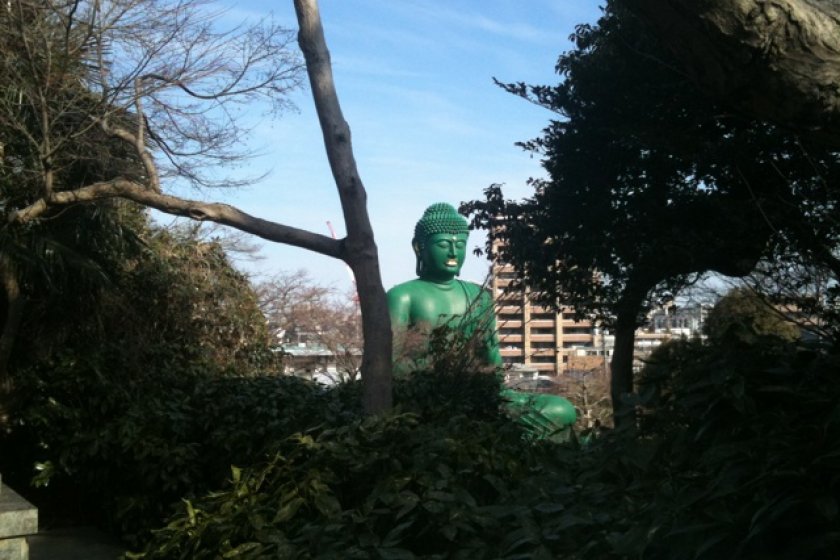 In the eastern hills of Nagoya city, behind large tile topped walls, and nestled amongst thick vegetation and some classical Japanese architecture is a scene that will have you doing a double take.

Nearby to most of the city’s major universities, Chukyo, Meijo, Nagoya and Nanzan, and a short walk from the exclusive suburb of Motoyama’s subway station is the Toganji. The entryway is nothing much to look at, a tree line walkway up a slight slope. The first gate made of stone looks almost western in appearance, the second distinctly Chinese. On entering the main area, everything reverts to 16th Century Japan, and then you see it.

Looking like a great green alien from another world, it’s the Great Buddha of Nagoya, the city’s largest Buddha.

Toganji is a Soto sect Buddhist Temple established in 1532 by Oda Nobuyuki, the younger brother of Oda Nobunaga and lord of nearby Suemori Castle. The temple was founded in memory of his father, Oda Nobuhide, and named after Nobuhide’s posthumous Buddhist name. The temple was moved to it’s present location in 1714, and with it went the five tiered Gorinto memorial stone to the warlord that can still be seen in the main courtyard.

The temple is dedicated also to Benzaiten the goddess of eloquence, music and art. For that reason, the temple is important to the city’s entertainers and show business personalities who visit to pray for success. A ceramic statue of the goddess, naked in a sleeping position it’s modesty preserved by loose flowing robe like covers, lies waiting for you in the treasure room. If the head priest is there, he will probably invite you to have a feel of the goddess under her covers. “Go on, I do it all the time,” he said during a recent visit.

In an adjoining room are the other the treasures of the temple, many carved phallic symbols of various size, are kept behind glass doors, along with figures of men and women engaged in,…well, let’s just say “in various suggestive poses”. The Toganji also has in its possession a large block of ancient wood, said to purge all past sins if touched with one hand.

In 1987, a Great ten-meter Buddha was cast, surrounded by statues of elephants, reindeer and a number of monks. Sitting almost 15 meters high on its red concrete pedestal, this is the biggest Buddha in Nagoya. Until recently, it was a typical copper bronze alloy color, however the current abbot had it painted a deep green with golden lips and features on a whim. Still, it does make for an interesting contrast with the surrounding trees and bamboo, and with the new multi storey apartment building not far behind it.

One of the former head priests of Toganji completed his Buddhist studies in India, and the influence from the seat of Buddhism is evident here and there, such as the elephants surrounding the great Buddha, and the large Lingam, another Hindu phallic device, considered the symbol of male creative energy. Shrines dedicated to other traditional Indian gods also dot the landscape.

The grounds of the Toganji are surprisingly wide, and the temple is a popular walking spot amongst the locals. The grounds boast a wide range of flowering plants, a grove of giant bamboo and even a turtle filled pond. Like most temples and religious sites, this is one place to relax and quietly ponder life’s mysteries, beginning with, why is there a reindeer amongst the elephants at the base of the Great Buddha? 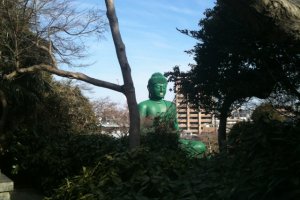 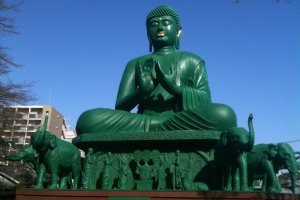 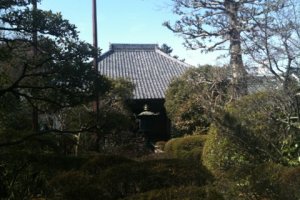 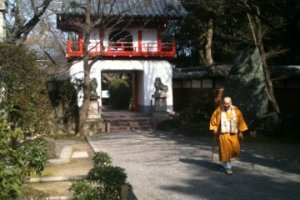 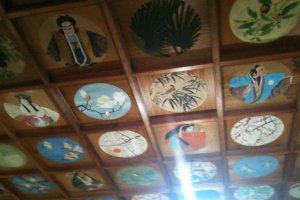 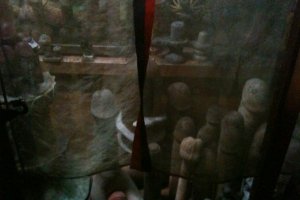