Ancient folklore and a winter's tale

The Oga Peninsula of Akita is home to namahage,—a kind of demonlike ogre—who roam the region in winter looking for lazy or disobedient children. The Namahage Sedo Festival is a traditional event that began in 1964, which combines the folklore tradition of 'Namahage' and the sacred Shinto ritual of 'Saitousai' into one main spectacle. Thanks to their cultural significance, Oga's Namahage were added to UNESCO's Intangible Cultural Heritage of Humanity list in November 2018, to join seven other prefectures similarly offering raiho-shin rites, where people don masks or costumes to become certain deities.

The festival itself is held on the second weekend of February every year.

Who are the Namahage?

If people, especially children or young wives, sit around the fire for too long without working or studying, the fire will damage their skin. This legend comes from fact: in olden days, people sat around a fire pit called "irori" and if they sat around too long, their skin could get slightly burned. It was said that the namahage would notice this and come out with a knife and slice off the damaged skin. That alone is terrifying enough to keep busy. So for that reason today's namahage always carry a fake knife.

Everybody on the Oga Peninsula has a great incentive to work, study hard and listen to their superiors. Namahage can be considered gods or ogre-like creatures. Gods, since they are closely linked to Shinto shrines of the Oga Peninsula and ogres as they scare children and sometimes take them away. You can find many stories about their origins. Namahage also helps the local people by praying for a bountiful rice harvest, so they aren't only bad. Some people say that they came from China long ago, which seems likely, as the peninsula isn't too far off China's coast.

When is the Namahage Sedo Festival?

The festival itself is held on the second Friday, Saturday and Sunday of February every year. The namahage will come down the mountain at around 7:30pm. The festival starts around 6pm and there's a giant bonfire in the center of the town’s main square. This fire is said to use the same amount of wood that it takes to heat up a house in winter. Many people will stop by the shrine to pay their respects on their way in. The steps are illuminated by red paper lanterns—it's quite a sight to see as it contrasts the white snowy background.

At 7:25pm, fifteen namahage descend from the mountain, each carrying a torch. They make their way through the crowd shouting, “Are there any crybabies around?” (Nakuko wa inee ga?) or “Are there any naughty kids around?” (Wariko wa inee ga?) in local Akita dialect. As they make their way through the crowds, they grab kids that they suspect are naughty or lazy, setting them straight forever.

This is the climax of the evening: the sound of taiko drums, the snow falling, the shouts of namahage on loud speakers, the giant bonfire and the screams of children. The atmosphere is really electrifying and they will check every inch of the square looking for children, they are scary enough that children will usually behave better after seeing them.

Often, in the shuffle to get through the crowds, some straw falls out from their outfits. It is considered good luck to pick it up and keep it until the following year. However, it is highly disrespectful to pull at their costumes and doing so will probably bring you bad luck in the coming year. Each namahage walks around with a minder to make sure that doesn't happen. Once the namahage’s job is done, they go back to the mountain where they came from.

A little later, more namahage from other villages of Oga Peninsula will come out to distribute goma mochi (sesame flavored mochi). That, and sake, are a big part of all Shinto rituals.

The festival itself is in the middle of the peninsula next to the Namahage Museum. You can go by car but parking is limited, it's probably better to go by bus or train. The train or bus from Akita Station to Oga Station costs around 700 to 800 yen in total. There are several shuttle buses from Oga Station. The ride to the festival site from there costs around 300 yen and takes around 40 to 50 minutes. Both prices are about half for children. There are also some shuttle buses from Oga Hot Spring Village. 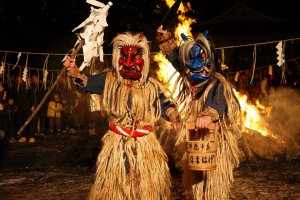 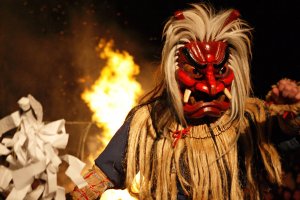 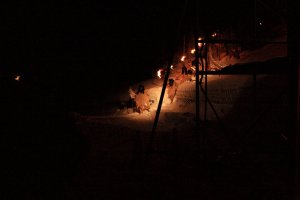 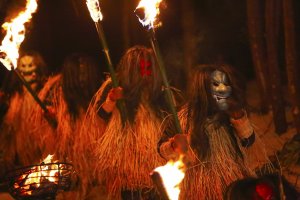 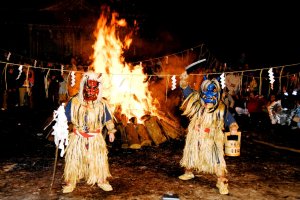 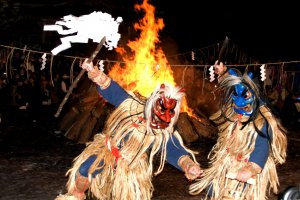 Elena Lisina a year ago
Very unusual images and festival! It seems hard to reach without a car...
Reply Show all 0 replies