Showcasing living nightmares and fun facts in the Oga

You can’t go anywhere in Akita Prefecture without seeing references to the demon figures known as namahage. They are immortalized as souvenirs in gift shops and dance or frighten others when they are mascots at community events. Where do they come from and what are they? You can find out at the Namahage Museum in the beautiful Oga Peninsula area of Akita.

The namahage are often thought of as demons, but in reality they are kami. This Japanese word can be translated as deities or gods. There are various reasons that try to explain the namahage origins at the museum. Some say two millennia ago an emperor from a far away land came with some ogres to pillage the towns of the peninsula. Others say foreigners, perhaps hairy Russians, were shipwrecked near the coast. One thing for certain is the kami in disguise come down from the snowy mountains each year to make their presence known. The monsters enter the households each December 31st during the late evening to scare children and wives that are thought to be too lazy or disrespectful to the man of the house. Young men perform this ritual and you can see a recreation of it at this cultural and historical center.

Oga’s Namahage Museum is divided into two buildings. The first covers the history and namahage’s role into today’s society. There are pictures of the surrounding area, information about the demon tools of torture and clothing, displays of over 60 life-size namahage models and a free photo area to dress up as a namahage. My favorite activity was watching the documentary of namahage history and of scenes of the demons scaring away bad spirits, energy, and children from the household. Some restaurants in Akita have a Namahage theme as well.

The adjacent building requires a separate entrance fee, but you should definitely check it out. Several times a day the Shinzan Folklore Museum, part of the Namahage Museum, puts on performances. Local actors reenact demons bursting through the front door and scare the audience. After much yelling and stamping around, the father of the house offers saké, food, and promises that we will all behave. The demons remind the parents in the crowd that if their children are misbehaving, three claps will bring the demons down from their mountain home. They leave the house, but they’ll be back next New Year’s. 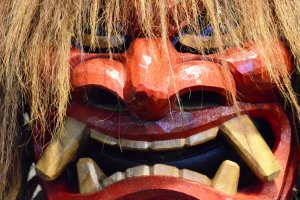 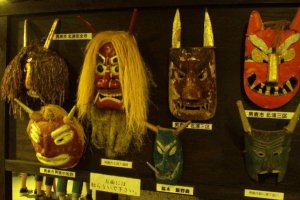 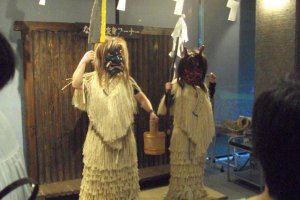 Elena Lisina 2 years ago
I like them! Is it possible to get there by some public transport?
Reply Show all 2 replies

Sébastien Duval 2 years ago
If the author does not reply, please consider asking in the dedicated "Japan Travel Questions". https://en.japantravel.com/questions
Reply

Bonson Lam 7 years ago
Yes the Namahage Museum is in the middle of nowhere, and that is part of the attraction with onsens and crystal blue waters for diving nearby. The airport taxi van offers a door to door service from the Airport to Namahage Musuem, with 3 services a day taking just 95 minutes to get to this wilderness area. https://en.japantravel.com/akita/akita-airport-to-akita-city/10320
Reply Show all 0 replies

JapanTravel Guest 9 years ago
Justin: Wow, this is really in the middle of nowhere. How far is it from Akita city?
Reply Show all 0 replies

Bonson Lam 9 years ago
This beautiful museum reminds me of the Anthropological Museum about the American Indian and Eskimo folk tales at the University of British Columbia in Vancouver. An amazing place full of raw legends and celestial traditions. It makes you think of where we have come today as human beings.
Reply Show all 0 replies
6 comments in total