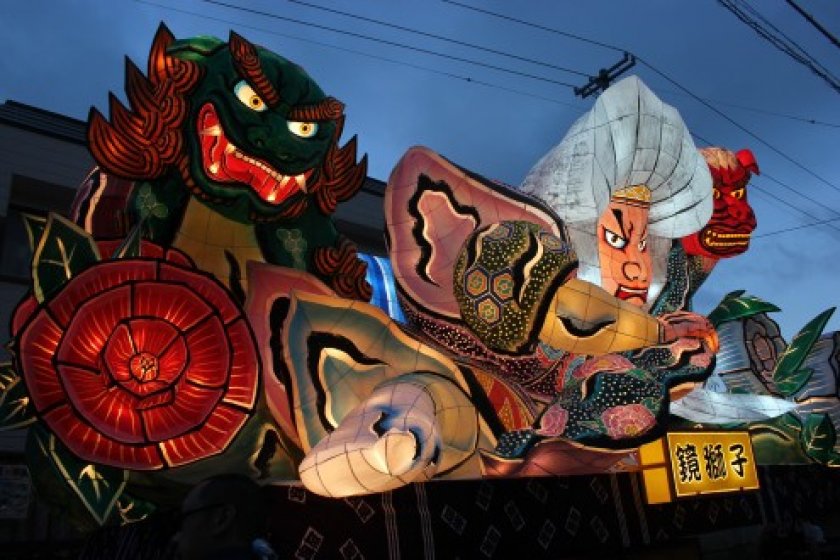 Ominato Nebuta is a fun way to experience a unique local festival right in people's backyards. A great way to get to know Japan.

When? The first weekend of August ( Fri- Sun ). Friday: The floats are lined up by the water's edge next to the Mutsu Wellness Park for viewing. It begins around 6 PM, but you can show up earlier to chat with the float makers or partake of the food stalls. Shortly after nightfall, a fireworks show is held. Note: There is no actual parade on Friday, just a viewing and the fireworks. Saturday and Sunday : The procession begins around 6 PM ( they sometimes start early or late ) and lasts until 8 PM, but revelers remain in the streets well past 8.

Walking through the streets overlain with sunset hues, the distant rumble of drums could be heard. I spied out an empty lot and shared the steps leading up to it with a few local residents, camera at the ready.

The procession made its way through the narrow road toward us in waves. The first wave was of children dressed in traditional clothes; a few were pulling a small paper float of a cartoon character. After them, the assault began. Older men with lanterns lead the way. In their wake was a float 10 feet or so high and 10-20 feet wide, being pulled by volunteers from the various neighborhoods or organizations that sponsored the float.

Each float that passed by was a depiction of various gods, samurai and other historical figures, demons, and the occasional cutesy animal. They were made out of paper (the same kind you find in the paper walls and sliding doors here) with a skeletal frame of wire, lit up from the inside so as to cast an iridescent glow of color. My favorite one was of a samurai standing in the waves of the ocean, sword drawn against a cyclops and demon samurai wrapped in blue fire.

At various points the men would spin the float around in a frenzy to impress onlookers, narrowly missing clipping homes and people in the narrow streets. Immediately behind the floats were taiko drums being beaten upon in rhythmic fury, with dancers of various sorts in their trail. This is Ominato Nebuta.

It seemed like everyone from Ominato was there. Ominato was its own town back in the day, but has now been fused together with other towns to become Mutsu, the biggest town in the Shimokita Peninsula in Northern Aomori. Hundreds of people lined the streets, had BBQs set up, would jump in and out of helping pull the floats, pass out free sake and beer, providing an overall joyful atmosphere. I felt like an actual reporter as practically everyone in the parade either posed for me or had their leader come over and talk to me. The actual meaning of the festival itself is slightly unclear to me, and probably too many Japanese people as well.

From what I’ve gathered, explanations for the origin of Nebuta range from a celebration of crops to a linkage with the last dynasty of northern Japan and their defeat by Kyoto. Whatever the origin, it is a festival worth taking part in. Much smaller in scale compared with the Aomori city Nebuta, but precisely because of that fact, much more intimate and easy to get to be a part of. 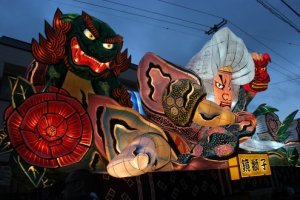 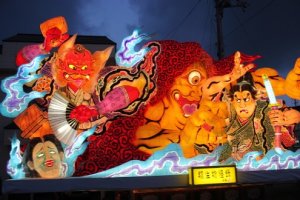 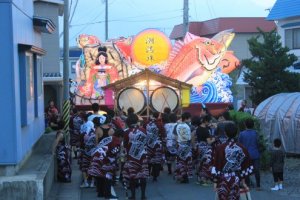 Elena Lisina 5 years ago
I wish I could watch that!
Reply Show all 0 replies

Bonson Lam 8 years ago
I really want to go to this place now! It also reminded me of the Kanto festival, where the writer tries to put in words the excitement of the festival, describing the now upright lanterns, "swinging from side to side, like an animated spirit on a drunken dance, just inches away from the power lines. Clearly this ancient tradition of Kanto dancing treads dangerously with the electrical superhighway."
https://en.japantravel.com/akita/akita-kanto-lantern-festival/2183
Reply Show all 0 replies

JapanTravel Guest 8 years ago
While this site has a few really nice Nebuta festival articles on it, this one has to be the best in terms of description. Loved the part where Shawn talks about the Nebuta carriers twirling the float around and narrowly missing buildings and bystanders...!
Reply Show all 0 replies

Sarah Conde 8 years ago
I just love all of the colors! Looks like a great experience.
Reply Show all 0 replies
6 comments in total