An Introduction to Japanese Rice

A brief introduction of the history, types, and role of rice in Japanese cuisine and culture

Rice has been a staple source of energy for inhabitants of the land we today call Japan for millennia. Recent studies revealed that the first rice fields might have already been in place during the Jōmon period, about 6,000 years ago; while the introduction of rice cultivation about 3,000 years ago during the Yayoi period boosted the development of the Japanese islands.

With the rise to power of the Tokugawa Shogunate and the beginning of Japan’s Edo period, rice became so relevant that it was the center for the whole economy. The koku became a unit of measurement for the amount of rice production and a way to quantify the size of a domain. The larger their rice fields the higher the koku, and therefore the stronger the economy, which in turn led to a mightier military force. Most samurai were also paid in koku and a single koku was said to be enough to feed one person for one year. Larger domains were accounting for land that could produce as much as 1,000,000 koku per year.

During the medieval era to the Edo period, rice was also used as an alternative for money and a type of taxation (Nengumai) in which farmers were required to pay rice as their taxes.

Today the production of rice in Japan has indeed changed and so has its consumption. Today’s Japanese people on average consume half of the rice that they consumed 50 years ago. This is mostly due to the introduction of several international dishes that came along with the modernization of Japan. Despite this big change, Japan still loves its rice and there are many varieties and classifications in place to satisfy every palate. Moreover, there are strong ties that Japanese culture still has with rice, including many dishes and festivals directly connected to rice. Let’s explore the many facets of rice culture.

The seasons and Japanese rice

The four seasons are vital to rice production and where the crop-to-food process begins.

Japanese rice is also produced outside of Japan where it is known as Japonica rice. However, what makes domestic Japanese rice so delicious is due to the four seasons of Japan.

Spring: The long process of rice cultivation in Japan traditionally starts with the arrival of the new year. In spring, fields are prepared to welcome the seedling and the water level needs to be kept high. May and June are the months when rice planting starts in earnest with the blessing of many local festivals held throughout the whole country.

Summer: The warm temperatures and rainy season at the beginning of summer are ideal for rice growth. Continuous control of pests, such as insects or weeds is essential to preserve the integrity of the crops. By the end of the season, the rice fields look tall and strong with a bright emerald green color that is very iconic of this season.

Autumn: By the time the full heat of summer has died down and fall is in the air, the fields have now turned into golden waves of rice. Finally, harvest season has arrived. First, the water is drained from the paddies to make the rice easier to harvest. Next, a combine is used for rice harvesting. Then, the threshed rice is slowly dried and the hull removed to make brown rice.

Winter: Brown rice is carefully polished at factories and then shipped to wholesalers and vendors. The finished product makes its way into Japanese households across Japan. Thanks to the knowledge and experience accumulated by the farmers over centuries of rice cultivation and the distinct four seasons of Japan, rice is consumed nationwide, year-round.

The classification of Japanese rice

Rice is relatively easy to cultivate and can be found all over the world in regions with suitable weather conditions and plentiful rainfall. Japan is an ideal location for rice cultivation and also has its own local rice variant called japonica, which is rounder, thicker, and harder when compared to the longer, thinner, and fluffier indica rice strain from India. Japonica rice is also stickier due to the higher content of amylopectin, making it perfect to be used in dishes such as onigiri (rice balls) or sushi to be eaten with chopsticks.

Over the centuries, several varieties of Japanese rice have been developed. The most well recognized are the following:

Alongside these varieties, rice in Japan is also classified in different rankings. One of the most famous taste rankings by the Japan Grain Inspection Association started in 1971 as a taste sensation evaluation that rates cooked rice on appearance, fragrance, taste, viscosity, and firmness, resulting in one of the following rankings, in order from highest to lowest: Special A, A, A’, B, B’.

These rankings are assigned annually and are taken very seriously by both producers and consumers, with some rice producers having achieved the highest rank for several years in a row.

In 2014, the traditional Japanese cuisine or washoku was nominated as a UNESCO Intangible Cultural Heritage. This was a huge accomplishment for Japan. We could also say that rice has been recognized as an essential grain in Japanese history because rice is the centerpiece for a majority of national dishes. Let’s have a look at the most popular rice-based dishes of Japanese cuisine:

Rice has also been used for beverages and other products throughout the centuries:

In case you would like to get a hands-on experience related to Japanese rice right in the center of Tokyo, it’s time to become more familiar with Kaminari Okoshi.

A favorite snack among Japanese people for centuries, it represents the essence of washoku itself. It’s a sweet rice krispies snack mixed with sugar and syrup, which is then pressed into a flat shape and divided into cubes.

Just a few minutes from Senso-ji Temple is a building known as an institution of the Asakusa area: the main shop selling Kaminari Okoshi sweets, the 5656 Building. Within this building is an area where visitors can learn more about this traditional Japanese sweet and also make it themselves!

Make your own Kaminari Okoshi

Preparing Kaminari Okoshi is quite simple as it only requires five ingredients: The rice itself, syrup, margarine, and a main flavor from three choices (white sugar, black sugar, or caramel). Depending on the main flavor, peanuts or other ingredients can be added. Initially, the main flavor is mixed and stirred with the syrup and margarine in a pan over fire. By mixing and stirring you avoid burning your precious sweets. Once it begins boiling, add the rice and keep mixing to reach a very homogenous texture.

When the main body for the Kaminari Okoshi is finished, place the whole mixture onto a flat square surface and spread it even as you would do with a pizza. Once that even surface is obtained, it can be cut with the aid of a press with linear rigs on it. After the mixture has been cut horizontally and vertically you will obtain the traditional cubic shape of the sweets that have been a Japanese favorite for centuries!

Find out more about Kaminari Okoshi 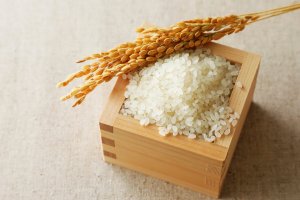 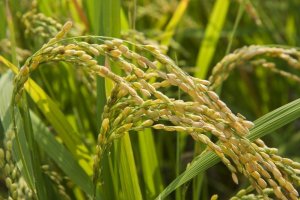 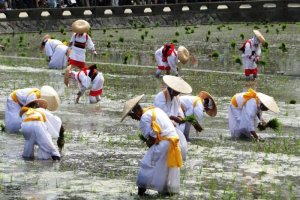 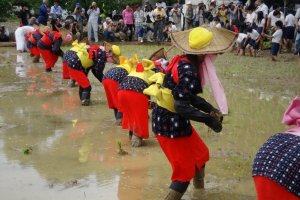 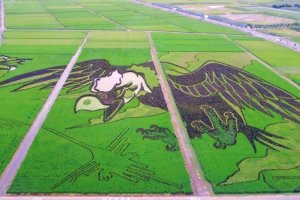 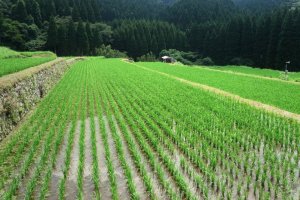 Justin Velgus 2 weeks ago
A good intro article. I bit of clarification from a certified sake sommelier (me!). Sakamai is different than table rice (rice for eating) in several ways.

Sakamai is physically larger, produces stronger grains that are more resistant to cracking for a more consistent brew, and about 3 times more expensive! Eating sake rice wouldn't be that tasty since it has less fats and proteins than regular table rice. Sake rice has its rice concentrated in the center, with fats being on the outside which can be milled away. In essence, getting to that pure starch center produces a more consistent and refined product.
Reply Show all 0 replies

Other rice varieties I occasionally find in Kanagawa and Chiba Prefectures are kuromai, black rice and kodaimai, ancient rice. I prepare them the same way I make brown rice, and they've got lots of nutty flavor.
Reply Show all 2 replies

Luca De Pasquale Author a month ago
Never tried those Elizabeth, only had black rice at times, I am from Kanagawa ken so I better look for these next time I visit the local rice store ! Thank you for the info
Reply

Elizabeth S a month ago
As far as I know, Hiratsuka and Odawara Cities have kodaimai growers and you might find kodaimai included in zakoku, or mixed rice.

Luca De Pasquale Author a month ago
Should be added to the traveller's must read before they come to Japan ;)
Reply

Sleiman Azizi a month ago
In many places, rice is just something you add flavours to but in Japan, rice IS the flavour.
Reply Show all 1 replies

Luca De Pasquale Author a month ago
Indeed, and is the foundation for every aspect of Japanese culture !
Reply

Kim a month ago
This is a great summary!
Reply Show all 1 replies

Luca De Pasquale Author a month ago
Thank you Kim, this is the least I can do with such an important resource as Rice
Reply
13 comments in total