3 Reasons Why You Should Get a Goshuin

Whether you're currently living in Japan or plan to visit in the future, it's likely that you'll want a keepsake from your time here. If I had to pick a perfect souvenir, it'd be a goshuin - and I only hopped on the bandwagon quite late in my time living in Japan. These books are used to collect "stamps" from different shrines across Japan, and there's a few reasons why I think they're amazing.

They're an ultra portable souvenir

I've often had times during my travels where I've enthusiastically picked up a souvenir only to think "how am I meant to get this home with me now?". Thankfully, that's not a problem with a goshuin! It's super easy to just stash away in a backpack or handbag, and since they're quite light, you won't be worrying about things like baggage weight limits.

Another thing I love about having a goshuin is that the stamps at each shrine really are like mini works of art. The calligraphy for each stamp ranges from highly intricate and ornate to beautifully simplistic, and exploring the differences between each of them is part of the appeal. Watching the stamp calligraphy being completed is really impressive as well - there's something soothing about watching the brush strokes being effortlessly made.

It's an inexpensive way to chronicle your journeys in Japan

Let's face it - some souvenirs are expensive, and we don't always have the budget to drop a small fortune on a keepsake. One of the best things about a goshuin is that it's a very inexpensive way to document your travels across Japan. My book was around 1000 yen at Izumo Taisha Shrine in Shimane, and the actual stamps have varied in cost from being completely free to a couple of hundred yen (around $2 USD). 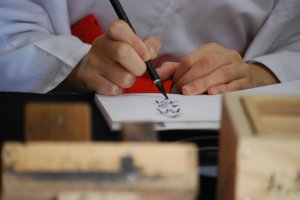 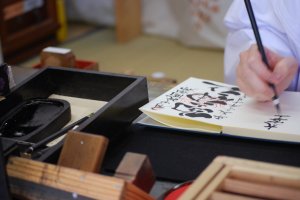 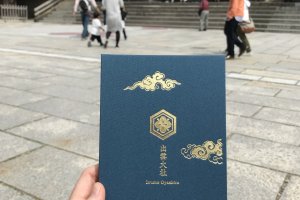 Elizabeth S a year ago
Even if you don't have a goshuincho, a book, you can receive the stamps on cards. I have a few from favorite shrines framed on my wall.

Friends here got a hanging scroll to receive the goshuin stamps for a specific pilgrimage route. It's remarkable record, and took them many weekend trips. Some pilgrimage routes are completed in just a few days.
Reply Show all 0 replies

Gary Luscombe a year ago
I've only filled two books over the last 6 years because I keep forgetting to bring mine with me. They are a great thing to collect though.

What I didn't know is you can actually get a similar thing for ryokan. Every now and then a guest will give us a book and the owner will stamp and sign it with his own calligraphy.
Reply Show all 3 replies

Kim Author a year ago
A ryokan goshuin?! That's a whole new world of possibilities!
Reply

Gary Luscombe a year ago
I'll try and find some more details at work for you.
Reply

Kim Author a year ago
That would be great - don't stress if it's too difficult, but I am curious now!
Reply

Elena Lisina a year ago
On my last trip my friend came with me and she collected such things. But I forget and miss them :)
Reply Show all 3 replies

Kim Author a year ago
I only got one after about 4 years living in Japan. I get a little disappointed at all the stamps I would have collected if I'd bought one earlier. However, I'm glad I finally got one so that I can keep updating it for the shrines I visit in the future :)
Reply

Sleiman Azizi a year ago
I completely ignored them for a long, long time. It's only recently that I have developed an interest. Such is life!
Reply

Elena Lisina a year ago
My friend travels a lot and has special notebook for stamps, also she sends post cards to her friends from different places. It's a kind of fashion in Moscow! :)
Reply
9 comments in total